During January 2019, movements in the structure of the forward curves for the rolling annual prices indicate a shifting sentiment, with nearby prices dropping about 5%, whereas forward prices increased.

Even though average temperatures during the month were about normal we did also experience the lowest temperatures for 7-8 years; prices showed some volatility within month though nothing extreme.

Global impacts on energy prices were mixed, fundamentals evidenced a good overall supply position and technical indicators were tending towards bearish. Brexit votes and negotiations appeared to have no significant impact.

February should provide a useful indicator of things to come, especially if the forward curves continue their directional shift toward contango.

There were no particular surprises for the gas market in January 2019, though there were occasions when gas demand was high due to cold temperatures and days when gas-fueled generation was relied upon to meet power demand in UK. LNG suppliers were good throughout the month too.

Nevertheless, gas prices for summer deliveries appeared weaker; so much so that by the last day of January the first two summers were in contango – the first time we have seen this for several years. Winter prices were more robust however, partly due to a risk premium from last year and partly due to short term issues.

Forward gas prices are still higher than this time last year, though fundamentally, structurally and technically the market is more bearish than a year ago – how the curve structure changes over the next month or so will be a key indicator that should be watched. 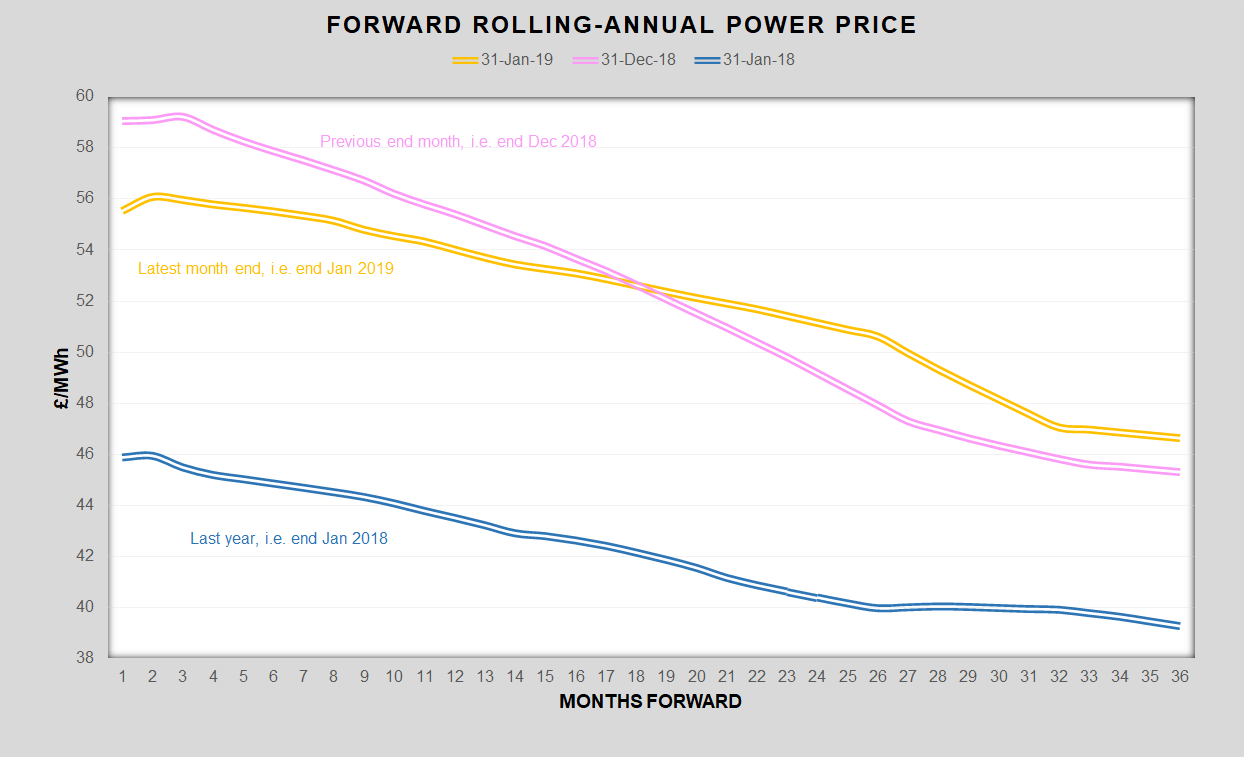 Historically, January can be a high-priced month, driven primarily by strong demand, relying on gas fuelled generation competing for supply with increased domestic (gas fired) heating. With increasing levels of intermittent generation like wind and solar, this reliance on gas can often be further exaggerated; such renewable production can be unreliable on those very cold and crisp winter days with clear skies and low wind (i.e. high pressure) – this year has been fairly typical from a weather perspective, yet nearby/prompt prices reduce compared to last month.

The forward curve for rolling annual prices is still showing some backwardation though the backwardation has reduced further showing increasingly bearish tendencies – as for gas this needs to be watched over coming weeks to provide a sense of the longer-term trend.

Brent crude oil has shown some support during January 2019, after a dip last month, due to some positive signs from US China trade talks. While trade data from China continues to disappoint, the financial markets are beginning to respond more positively in the belief that Chinese authorities are likely to support the Chinese economy later in the year. From here on most analysts believe prices will stabilise though there is still some upside potential without any improvement in the Venezuelan political situation.

Current weather forecasts show an on-average month for February 2019 though some forecasters are predicting another cold spell before the end of February. Accordingly, we are likely to see the market drift until mid-February with a potential price spike in the case of more cold/wintery weather. Thereafter, if the temperatures warm up as Spring approaches, current fundamentals should be enough to tip sentiment, provided we don’t see any significant supply-shock surprises – technical analysis studies also just need a nudge to establish a confirmed downtrend.

At this time, the focus should be looking for signs of developing contango, in which case purchasing strategies would change from buying forward to achieve value (from any backwardation) to reverting to delayed buying, in order to benefit from the contango as prices ‘roll down’ the curve – those with lower risk tolerance, could partially cover forward during any price dips, leaving some flexibility open.

Do you need Energy advice? Talk to our experts: