November 2018 was, as usual for this time of year, a reasonably volatile month for wholesale energy prices; peaking at 8-10% higher in the middle of the month, however, forward prices ended up pretty much where they started or even slightly lower.

The price volatility was driven by both global political and short-term fundamental issues, primarily a cold spell in what on average was a warmer than normal November.

The rolling-annual forward curves for UK changed little this month, indicating no significant change in underlying sentiment, despite the volatility.

Despite the day-to-day volatility, from a procurement perspective November 2018 was a good example of where patience and a risk managed approach, by spreading buying decisions out, available through flexible contracts, would have been beneficial and less stressful than trying to pick off the market; prices jumped 10% on short term influences only to drop back again – any panic buying because of the short term impacts could have been costly.

Whereas the rolling-annual forward curve structure is still in backwardation, indicating underlying structural longer-term support for the market, technical and fundamental indicators are pointing more towards a drop in prices in the medium term – most notably a large number of LNG vessels en-route to NW Europe/UK. 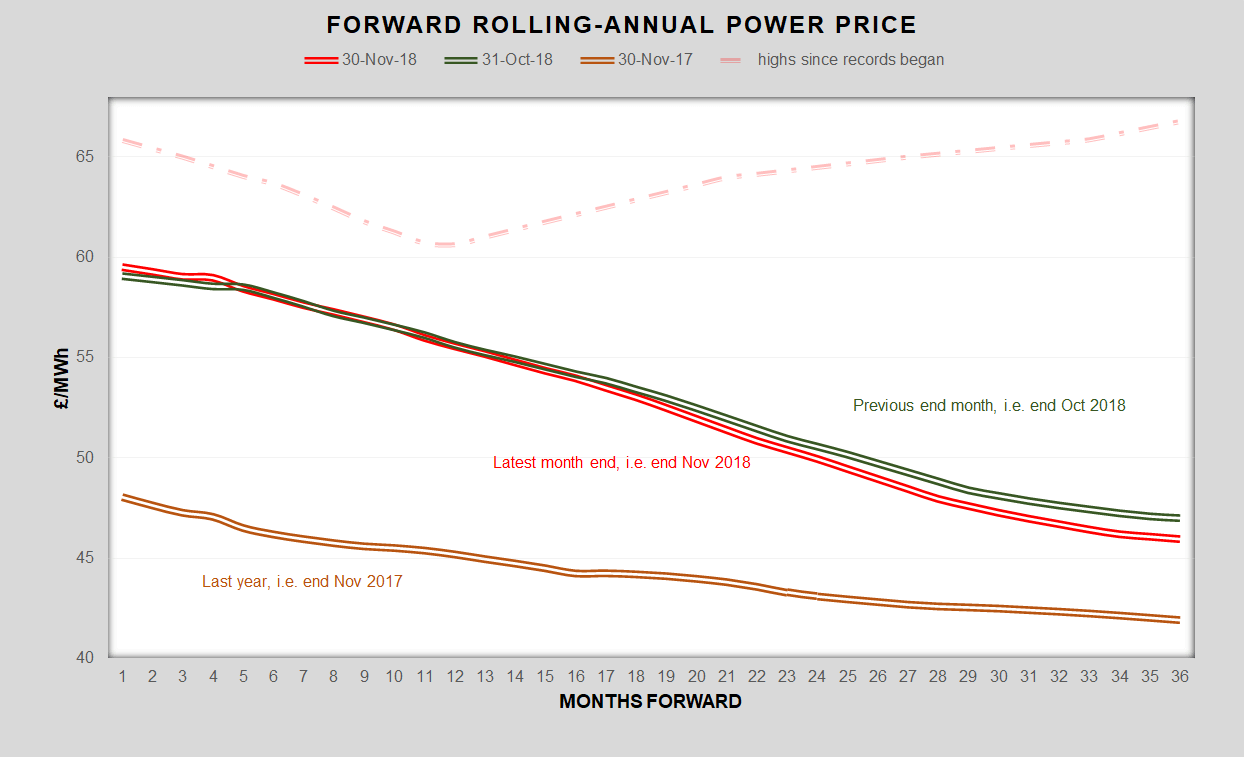 As for gas, UK power prices spiked mid-November 2018 though ended up at very similar levels to where they started the month. The chart showing the forward curve for rolling-annual prices also shows little change in forward structure.

November 2018 was also a good month for wind power production; according to figures from National Grid, wind energy hit a new generation record – Britain’s onshore and offshore wind farms generating as much as 14.9 gigawatts (GW), meeting 33% of Britain’s electricity needs at a time of high demand.

Without wishing to express any bias either way in the Brexit debate, UK received a blow from the ECJ related to UK’s Capacity Market, designed to ensure security of electricity supply, by preventing the UK government from holding future auctions and making payments under existing agreements. In the meantime, it would seem the UK and EU have proposed mechanisms to ensure security of supply and continued use of interconnectors; this may explain why the trade body ‘Energy UK’ has welcomed progress between the UK Government and the European Union (EU) over the withdrawal agreement.

Brent oil prices lost 20% during November 18. Record production from the US and inventories at their highest levels since last December have weighed on prices. Concerns that global economic growth may slow have also led to weakening demand. On the other side, OPEC and Russia have a meeting in early December when production cuts will be discussed, which could well help provide some market support going forward.

Winter looks to be arriving late this year though current weather forecasts do appear to anticipate some cold snaps in December and perhaps a colder than normal mid-winter. However, unlike last year, this may not represent such a big issue due to the fact we have yet to have any extended cold period to date, giving a healthy supply/demand balance.

It is always dangerous to predict lower prices as we enter meteorological winter, particularly as sentiment is easily swayed by political issues at this time of year. Nevertheless, some technical and fundamental signals, actually similar to this time last year, are reasonably well balanced and could tip underlying sentiment to become more bearish.

Do you need Energy advice? Talk to our experts: