Despite a relatively volatile month for oil, and news that some French nuclear plant will be off-line during October at least, forward UK energy prices ended the month at similar price levels to where they started. Throughout the month, UK power and gas prices were also quite volatile with the general nervousness, resulting in a structurally stronger market; evidenced by a slight increase in backwardation of the forward curves for rolling annual prices.

Gas price volatility in September 2017 was driven by a combination of the oil market, weather factors and supply volatility. However, whereas medium-term fundamentals haven’t really changed much during the month, nervousness has increased related to the impact of how storage availability has changed for this winter and any potential increased reliance on CCGT generation, should French nuclear generation continue to be disrupted. Consequently, particularly in comparison to last year, the forward curve for rolling annual prices showed some slight backwardation, indicating we could still see some further price increases as winter progresses. 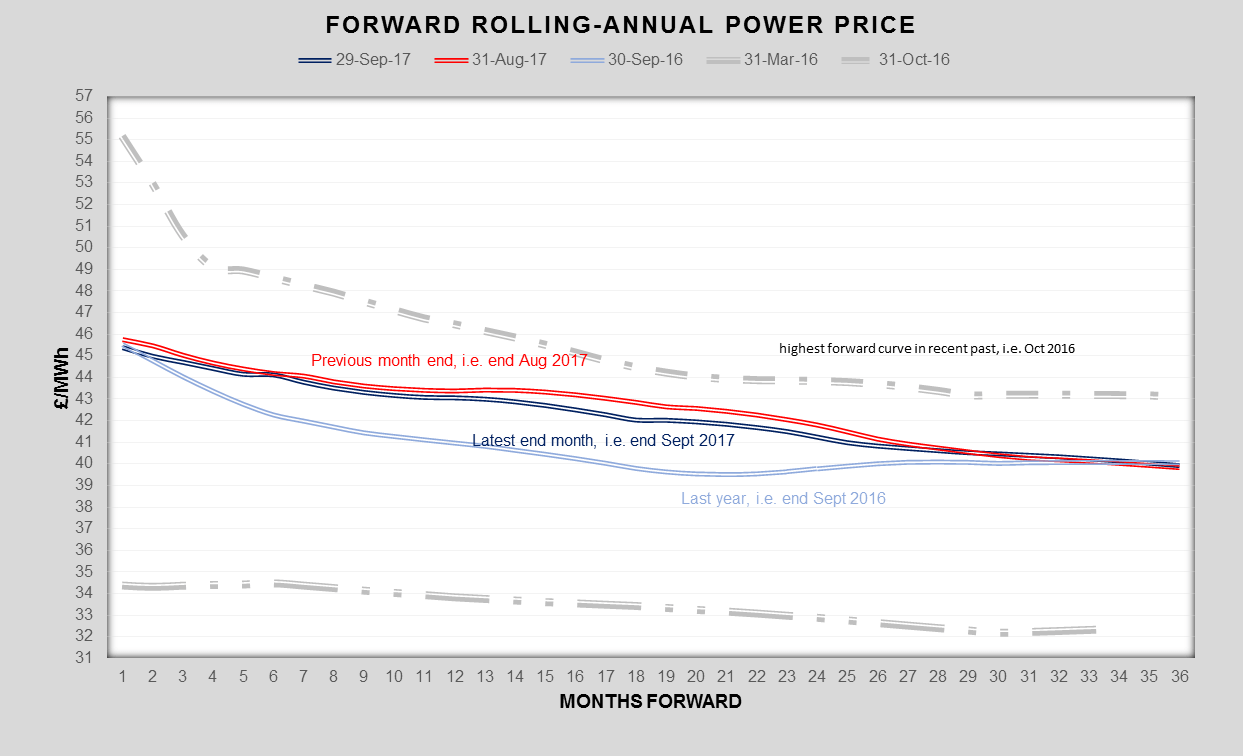 As the month drew to a close it was announced that summer 2017 was the ‘greenest’ on record for power generation in the UK. To some degree this also explains why during September prices were reasonably volatile again; the impact of variable wind production on short-term price volatility was evident. Nevertheless, despite this volatility and the spike on news that there would be some issues with French nuclear production this winter (concerns we highlighted last month), forward prices ended the month pretty much where they started, and demonstrating similar levels of backwardation. However, it is worth noting that the backwardation in the forward curve for rolling annual prices is not as strong as this time last year indicating a less committed (mildly bullish) sentiment and perhaps an indication that prices are not (yet at least) likely to hit the highs of last year – of course, if there are further problems with generation availability then this could change!

September 2017 will be remembered primarily for the hurricane season in the US Gulf and Caribbean, which has been unduly harsh; September 2017 has become the most active month on record for Atlantic hurricanes, starting with Hurricane Harvey at the very end of August, which hit Houston/Texas hard and provided the impetus for the crude oil market to rally to some of the highest Brent and WTI prices we have seen for a few years.

Forward curves for both gas and power are slightly backwardated, short term sentiment is nervous and fundamentals seem to be reasonably balanced. Medium range weather forecasts continue to suggest an unsettled, though not extreme, 2017 winter. In such circumstances the onset of winter (i.e. date of the first really cold patch) will be a strong driver as to what happens to prices, particularly if it coincides with storage constraints and any further issues with French nuclear generation capacity.

Whereas, at this time of the year, there is always a risk of large spikes in price, if nothing new challenges the market we could see the market slow down and perhaps even turn downwards by next Spring. Volatility is likely to remain a feature, especially as the Sterling FX rate will probably remain in the doldrums unless we see some decisive action (either way) in the Brexit negotiations.

From a strategy perspective, while we can’t be certain about market direction, based on the current environment, open flexible contract holders should probably consider a split approach and spread their risk; covering a portion of their requirements over the coming weeks while leaving the rest until later, perhaps even early next year, to see how the market progresses.