Prices across the UK energy sector were generally bullish during September 2016 with some contracts touching highs not seen for several years. Annual contract price levels generally increased by close to 10%. Oil was also volatile during the month, partially due to improving fundamentals but primarily due to a strengthening in sentiment related to OPEC and belief the cartel might actually agree to some form of production curtailment. Near-term (spot) power prices also showed some high volatility related to a variety of issues including interconnector flows and wind production.

Forward curves for the rolling-annual prices moved up this month, and while gas curves maintained their contango structure, power curves increased their backwardation. With winter 16 showing most movement, we now see prices for calendar 2017 power at levels higher than it was trading last year though longer dated years are still trading below levels seen a year ago. The power curves have not been this structurally-bullish for many years.

UK gas prices generally increased throughout the month driven by several factors: volatility of supply from Norway, changing oil market sentiment, the onset of colder weather and power price movements. However, while prices have increased by approximately 10% throughout the forward periods the curve structure remained in contango indicating supply fundamentals were still in balance, or even long, evidenced by day-ahead prices remaining reasonably stable during the month. Winter 16 supply concerns were eased also following Centrica’s announcement that some Rough storage gas will be available sooner than expected.

OPEC’s surprising agreement to limit production did provide support, especially as it coincided with a strong power market and weaker £/€ exchange rate towards the end of the month.

Unusually, we have seen gas prices move up while the forward curve for rolling annual prices remains solidly in contango, noting that prices for calendar 2017 are still trading at levels slightly lower than this time last year, though the forward curves have a similar structure. However, whereas in the past gas has often been the driver of the power market, at this time the influence of the power market is greater, especially as it is supported by an improvement in oil fundamentals. 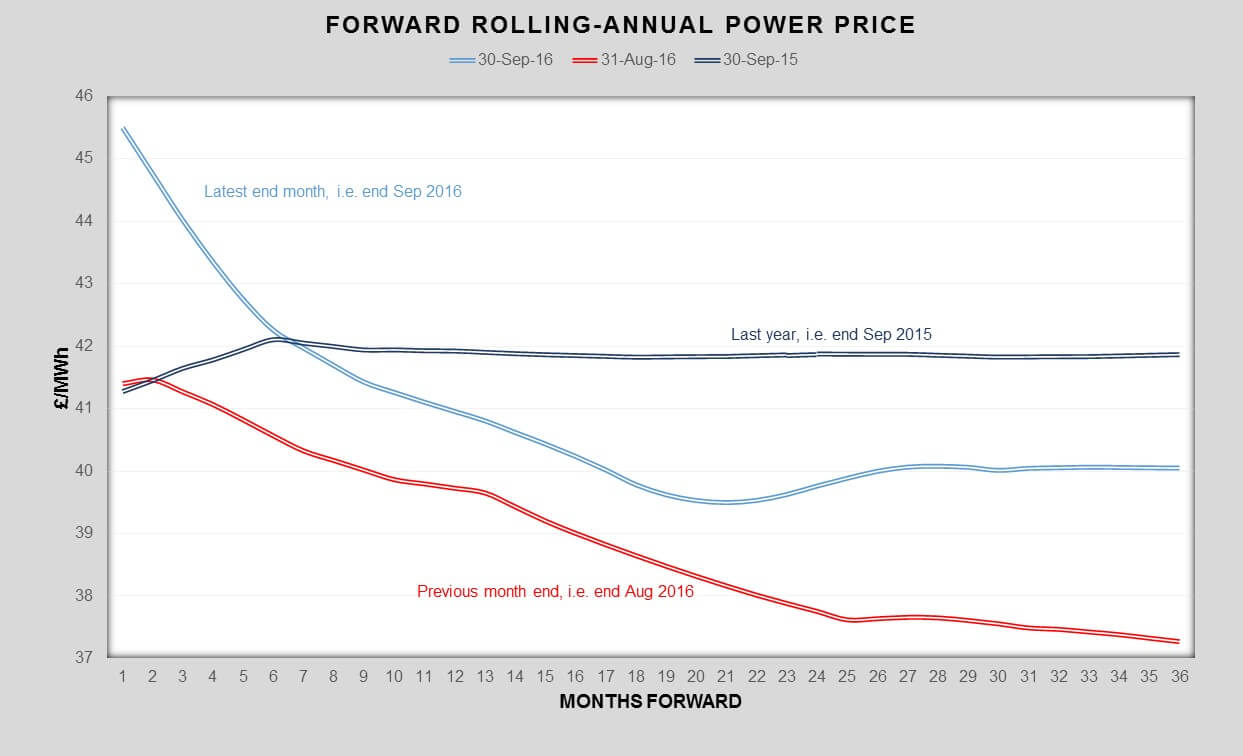 Power prices in the UK were much more volatile than usual this month with various different factors having an influence. September was a relatively warm month, which had the impact of increasing demand for air-conditioning while at the same time wind power generation levels fell – mid September these coincided and caused a big spike in day-ahead levels. Actually the influence of renewables can often be significant in late summer due to weaker spark-spreads (i.e. generation profit margins) resulting in lower gas-fired generation utilisation and renewables being a greater proportion of supply. We also saw some swings in flow through the French interconnector, which appeared to be being used to balance the French power market as their nuclear plant went in and out of maintenance schedules; this situation highlighted concerns in the UK market related to potential winter peak supply – i.e. should some of these French nuclear plant have problems during the winter, the UK could have capacity shortages at the peak.

Weather forecasts also turned cooler creating the possibility that winter heating demand may come earlier than usual – often a sure sign of a bullish winter market, though of course it is not too late for an ‘Indian Summer’ at the end of October.

Brent prices increased again in September 2016, as fundamentals continued to improve. However, the proper narrative of the past two months may be that a WTI price of USD 50/bbl (and year-ahead forward price of USD 54/bbl) is high enough to incentivise an increase in drilling activity and that a lower price is needed to keep US supply at a level consistent with reducing the inventory surplus in 2017. All this depends on OPEC and Russian production keeping at current levels or less, so the importance of OPEC’s agreement and subsequent performance levels can’t be under estimated – if they stick to what analysts believe the agreement to be, then prices can go up but if quotas are higher than anticipated or actual production levels do not reduce, over-supply could bring prices crashing down again. Currently we are in the “buy the rumour” stage; the question for oil is will we get to a “sell the fact” stage or not?

As usual, as we move through October, and to November, our attention needs to be on the weather, particularly in relation to seasonal norms or any extremes. Based on the start of October, the month ahead already looks like it could be quite bullish, especially if temperatures and forecasts continue to show much lower than seasonal normal temperatures. Concerns over peak power capacity are another bullish sentiment driver, so what happens with interconnector flows and the performance of French nuclear plant is crucial.

It is unlikely we will get any reliable data about OPEC production during October, especially as the next meeting to confirm quota levels is not due until November, so no news is probably supportive for oil prices, especially if there is some talk of agreement between OPEC and Russia.

However, fundamentally on-going gas availability looks good, as gas that normally is destined for storage may need to come to market instead, and wind power production is often more reliable during Autumn.