Prices across the UK energy sector generally fell slightly again over September with many contracts touching all-time lows by the end of the month. While we did see some increased volatility in day-ahead spot prices in the power and gas markets overall market volatility was in line with usual levels for this time of the year. Oil prices also dropped again, this month by about 5%, due to continued concerns related to Chinese demand and the potential for increased global supply.

Forward curves for the rolling-annual prices were slightly more bearish this month, with gas curves showing a slight increase in contango, which should not be too surprising bearing in mind the slight weakness shown in the market movement.

Gas:
While spot prices picked up slightly at the start of September, by the end they fell off like the forward and annual contracts; finishing the month a little down. Some of the weakness was due to reduced demand for storage injection as a consequence of planned injection restrictions. September started off with slightly below normal temperatures, though by the end we were seeing some nice warm days; however, as the nights started closing in, the difference between daytime and night time temperatures began to increase noticeably. The forward curve for rolling-annual gas prices both moved down slightly and increased in contango slightly, indicating we may see prices move even lower in the short term and so continuing to make new lows for most contracts. This current price structure, while not showing high conviction, indicates that we should perhaps hold off from fixing annual prices yet but as prices are historically low the temptation to partially cover some requirements might be prudent, perhaps focusing on mid-winter. 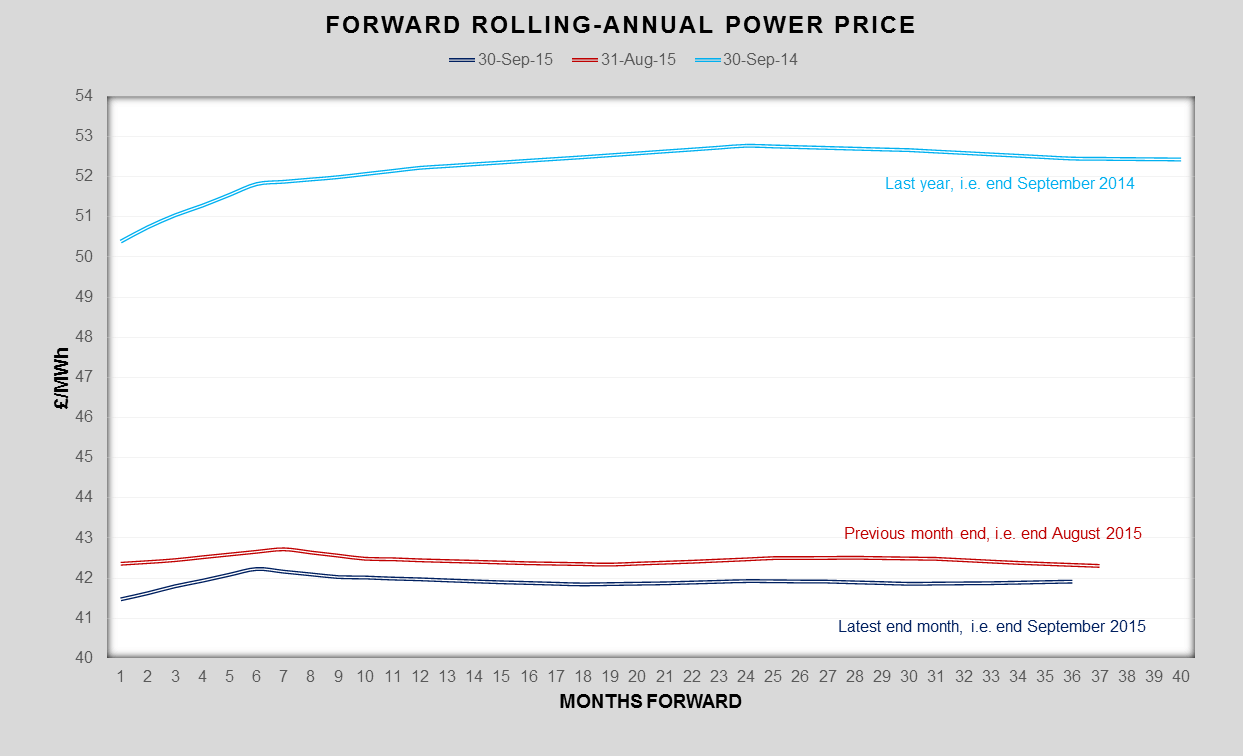 Power:
Day-ahead spot power prices this month appeared relatively volatile though forward contracts less so, generally moving slightly down. This volatility can be partly attributed to renewable generation levels and some reasonably large variances between night and day temperatures. The rolling annual forward curve changed little month on month, perhaps showing a slight drop and increase in contango – there had been some expectation that prices might increase but so far fundamentals have remained reasonably balanced. As with gas, the historically low prices are encouraging some buyers to ‘lock-in’ and fix prices for the contract year though the forward curve structure continues to suggest holding off a bit longer might be the best strategy. Nevertheless, with such historically low prices the urge to buy this winter at least might be prudent.

Oil:
Brent prices dropped again in September 2015, and like many commodities prices have reached multi-decade lows, particularly relative to other financial instruments like equities and bonds. Although fundamentals still remain broadly weak and curve structures in contango, a closer look reveals that the oil market may balance sooner than some expect- US crude oil production has begun to turn lower, and analysts say that revised production estimates suggest that non-OPEC supply will contract next year for the first time since 2008. Adding in the impact of stronger general demand growth this year, the oil market may see its first quarter of undersupply in Q4-16. However, H1-16 balances remain oversupplied with the assumption of OPEC at 31.3 mmb/d.

What’s the Outlook?
Politically, any volatility is likely to be Russian related as planned discussions relating to Ukraine and Russia’s increasing involvement in Syria are bound to raise the tension. Although, it may not all be bad and if progress is made in Ukraine and sanctions are lifted this could help increase supply of oil and gas further.

However, as we move through October, and to November, our attention needs to be on the weather, particularly in relation to seasonal norms or any extremes. As we move in to winter, one of the best indicators of whether winter prices will be high or low is the timing of when the cold weather starts; an early winter relative to normal generally means higher prices whereas a late onset helps keeps prices low – fundamentally this is related to heating demand and knock-on impact to storage levels. This ‘early- winter start’ impact is often greater than the impact of colder than usual mid-winter temperatures, which are generally allowed for by normal storage levels, whereas early demand decreases storage volumes earlier than normal, decreasing deliverability later in the year should demand be high.