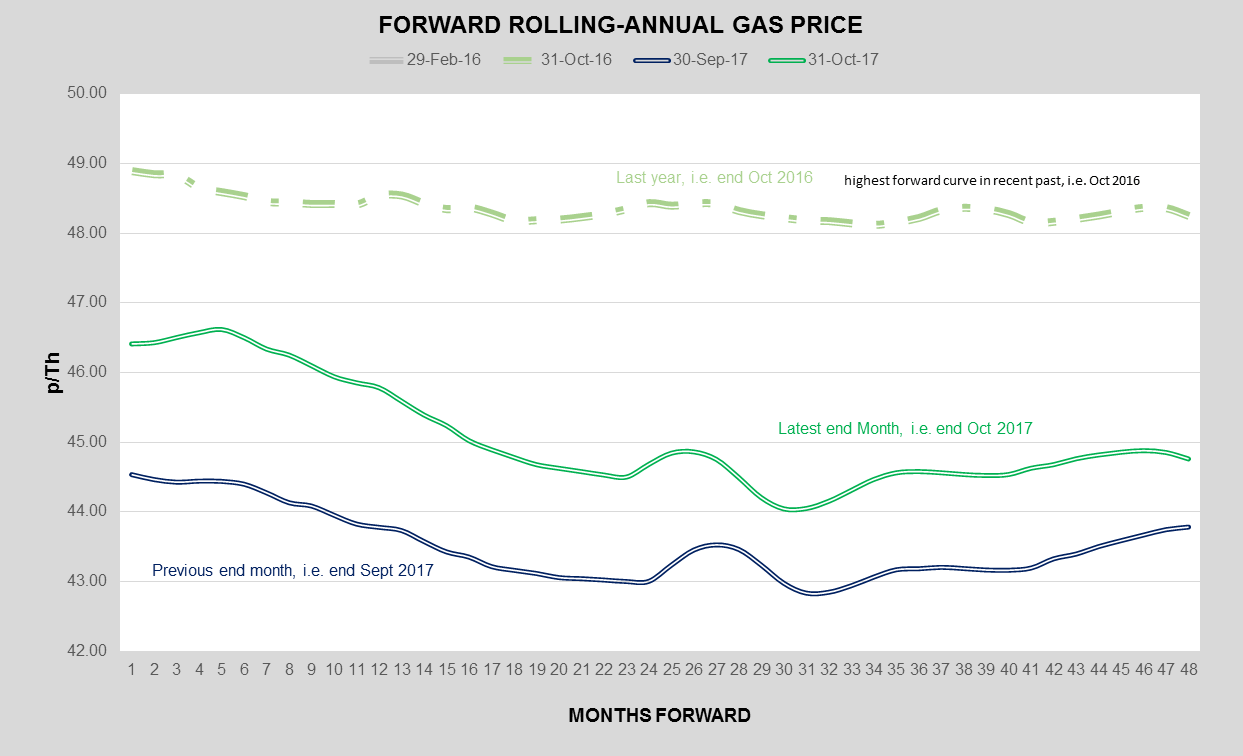 Within-month gas markets and near-term (prompt monthly) prices were relatively volatile this month as short-term weather forecasts and supply/demand balances were revised up and down throughout the month – early October being colder than expected, gas demand increased for several reasons, including for power generation, and supply was constrained from various sources. However, this period was followed by a much milder mid-October, resulting in a price dip during the second half of the month, providing a buying opportunity, before the strengthening oil market dragged forward prices up again. The forward curve for rolling annual prices still shows some backwardation, indicating we could see further price increases as winter progresses, though whether we will reach last year’s peak, when forward prices were about 3p/Th higher, is by no means certain and is something we will be watching over coming months.

UK’s wholesale electricity market moved pretty much in-line with the gas market during October, not least because gas-fuelled power generation volumes increased to fill a supply gap resulting from the colder temperatures experienced in first part of the month and reduced power-interconnector import volumes due to French Nuclear power plants undergoing tests. Whereas, the backwardation in the forward curve for rolling annual prices is not as steep as this time last year, it is interesting to note that the forward prices one year ago for 2018 and beyond are similar to those currently. So, while the forward curve remains slightly bullish, indicating some further increase in prices is likely, as the extent of backwardation has remained stable, we should watch for signs of changing sentiment, in case the recent bullish trend is about to change or whether it will return, supported by the strong oil markets.

During October 2017, Brent crude oil moved in to the steepest backwardation since 2014 and prices continued to move up throughout the month – highest since mid-2015. Despite this, the views within the oil analyst community are surprisingly diverse; some anticipating the supply/demand balance will slip back in to surplus during 1Q18,  and expecting the forward curve to flip towards contango, while other analysts are predicting that oil prices will stay up for longer, before we see any significant change in sentiment.

In the end, October 2017 was actually warmer than usual for UK (eighth warmest on record) and while warm Octobers were often followed by cold winters in the past, recently (last 20 years) the opposite has been true. Accordingly, longer term weather forecasts remain as primarily unsettled, with the likelihood of both cold and wet periods. However, from a pricing perspective, timing is of the essence; it is early, very cold/winter conditions that tend to create a high price environment for the first quarter. So, unless November is very cold (or if we get an early snow fall), we can anticipate that 1q18 prices should not be too extreme and any price hike would likely be short lived.

The other key indicator to keep an eye on over the coming weeks and months is the extent of backwardation in the market; if the curves steepen again we should expect a further pickup in prices, however, if the extent of backwardation flattens or gets less, we will be looking at this as a potential sign of a developing weaker sentiment and potentially a return to contango – we will be watching this carefully.