Prices across the UK energy sector were bullish again during October 2016, despite a relatively stable oil price. The main drivers were concerns over supply, primarily for electricity, though a large shift in the weather forecasts from expectations of continued mild weather to a sharp drop to below seasonal normal temperatures supported the price levels further. Near-term (spot) power prices also continued to show high volatility.

As a consequence of the high nearby volatility and supply concerns, the forward curves for the rolling-annual prices moved up sharply this month; electricity steepened its backwardation further and gas showed signs of backwardation for the first time in quite a while. Although the winter16 prices showed most movement, we now see prices for all forward calendar years at levels higher than trading levels last year. The power curves have not been this structurally-bullish for many years and with both curves now trading well over levels seen last year, this confirms the shift in underlying sentiment and that the lows seen during the last couple of years are now behind us. 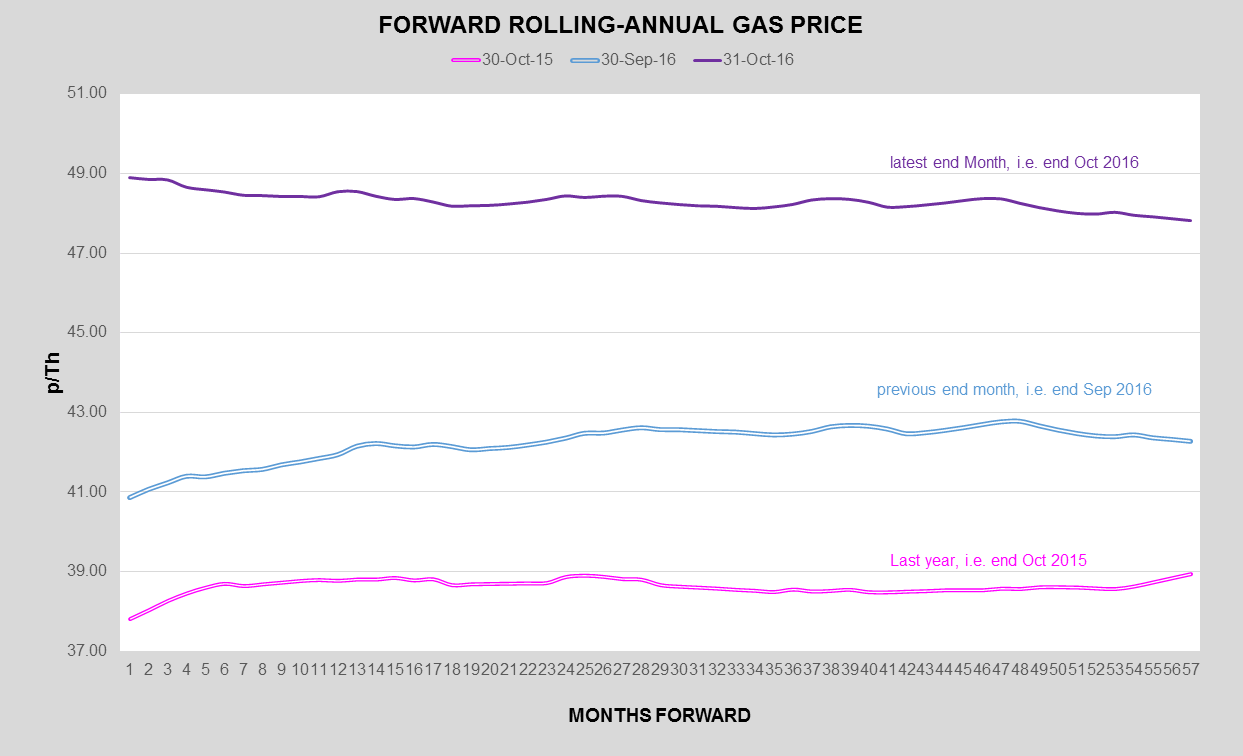 UK gas prices were strong throughout most of the month, driven by electricity fundamentals and in anticipation of forecasted below seasonal normal temperatures, following a relatively mild Autumn. While the crude oil market provided some support during the first half of the month, generally the oil market was not a significant driver – in fact Brent gains were reversed during the second half of the month whereas UK gas continued strong. However, UK gas fundamentals were impacted by fewer LNG deliveries while demand was up due to an increased requirement for gas fuelled generation. Nevertheless, despite some volatility coming from day-to-day Norwegian supply, the market appeared to balance without difficulty.

The most significant structural change this month has been the return of backwardation to the gas forward curve for rolling annual prices – we have not seen backwardation for quite some time and even now it is only mild backwardation. The other point of note is that the current forward prices are now well above those seen this time last year following the strong performance over the last couple of months. Such forward market structure suggests that the opportunity of any dips in prices should be taken to buy in some forward cover.

The power market continues to be the main driver and this is likely to remain the case in the immediate future.

Power prices in the UK were much stronger again this month driven mainly by supply issues though also in response to weather forecasts being revised to show temperature expectations well below seasonal norms, thus increasing demand. The discovery of widespread carbon segregation problems in some of the French nuclear plant has caused many of the French nuclear power generators to be either taken off line or have maintenance periods extended. EDF have indicated it may take several months to complete tests. Consequently, extra coal and gas generators are being operated in France (pushing up European coal and gas prices) and the UK-France interconnector has been exporting to France at many times of the day. Furthermore, supply of power from wind generation has been reduced due to the high-pressure weather conditions. Together these issues have increased electricity prices throughout the curve, primarily hitting winter16 but also further forward too.

A consequence of all this has not only been higher prices but also the forward curve for rolling annual prices has increased its backwardation further; forward electricity markets are trading well over levels seen this time last year. Such a market structure implies trading sentiment is strong and markets will continue to be bullish until there is some fundamental change – purchasing strategies should be considered in this light encouraging more forward buying.

Oil:
Brent prices were reasonably flat this month, with any price rise seen at the start of the month reversed by the end, despite a follow-up OPEC meeting with non-OPEC members to discuss production levels. However, all eyes will be on the OPEC meeting due end November where OPEC quotas will be discussed with the aim to establish levels that will control production and stabilise prices – this will be easier said than done and failure to agree could result in oversupply again. Nevertheless, most oil analysts now believe the oil market is returning to a more balanced position and prices expected to be about $55/bbl during 2017.

What’s the Outlook?
At this time of year, we start to look at the Winter long-range weather forecasts for a guide to winter demand. As we have said previously, winter price levels are significantly influenced by when winter really starts though the ongoing weather patterns are also very important for price development. Currently long range forecasts are reasonably mundane for the UK, indicating generally milder temperatures with more rain than normal during the first part of winter, however there are indications of anomalies, which are expected to result in several cold periods from January with sharp temperature drops – this pattern indicates periods of increased price volatility, which becomes increasingly important if fundamentals are constrained for other reason as we are currently experiencing. Overall the current long-range forecasts suggest spot prices might be lower than existing winter prices but with periods of potentially high spikes – NB: this analysis assumes normal supply levels and the market will hold a ‘disruption premium’ as long as the existing concerns persist.