Whereas oil prices ended the month pretty much unchanged, UK power and gas prices dropped again by a further 5% during October 2015; albeit all energy prices started the month on a firmer tone but by mid-month were all down. Oil prices did pick up again towards the end of the month adding a sense of stability.

Forward curves for the rolling-annual prices remained slightly bearish again this month, indicating comfort with the current state of supply for the winter though poised to flip should fundamentals, primarily weather and storage, turn bullish. 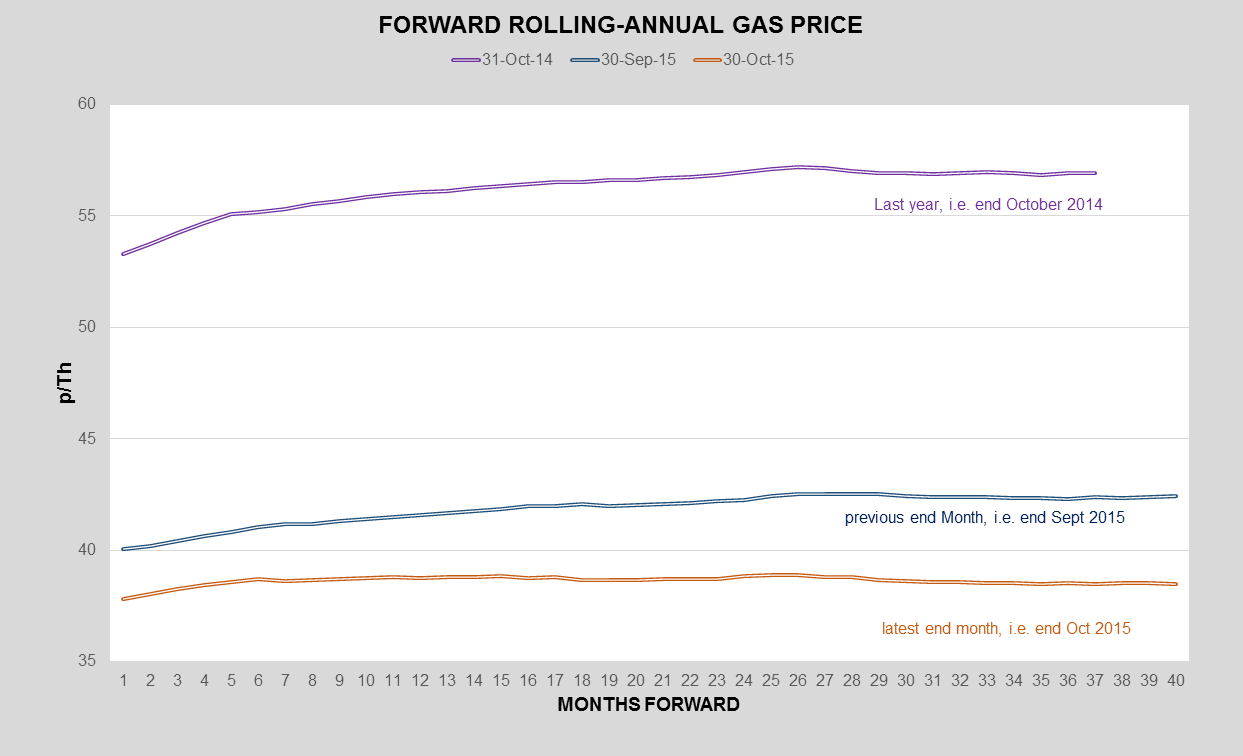 Prices picked up at the start of October, coinciding with some weather forecasts predicting a strong El Niño induced cold winter. However, reality set in and above normal seasonal temperatures plus reasonably good supply and storage levels eased concerns and by the end of the month prices fell further; finishing the month about 5% down. The forward curve for rolling-annual gas prices both moved down slightly and continued to maintain a slightly contango structure. This current price structure, while not showing high conviction, indicates that we should still be careful not to fix annual prices too soon though we need to be prepared should the market move up. In such circumstance, with prices historically low, it would be reasonable to at least cover some requirements, say balance of the year. If the curve flips completely to backwardation, this should trigger an acceleration in forward purchases.

Power:
UK power prices tracked gas with very high correlation this month, which should not be too surprising as gas generation takes more prominence in meeting the more variable demand changes as autumn progresses. The rolling annual forward curve changed little month on month in fundamental structure, i.e. remaining primarily contango, though did show a slight drop at the far end of the curve as well as nearby; this rather unusual structure is symptomatic of continued prompt weakness but with a market expectation that an underlying fundamental change will occur next year – perhaps related to the closing of more coal fired power stations.

As with gas, the pickup in prices during early October encouraged some buyers to ‘lock-in’ and fix prices for the rest of the calendar year, though in retrospect prices have dropped further so holding off a bit longer would have been the better strategy. Nevertheless, with such historically low prices the urge to buy in the balance of winter is strong, if you hadn’t already, especially amid concerns over a potentially harsh winter – some view that an upside move could be higher than a downside move even though the probability of such a move may be less.

Oil:
Brent prices were somewhat volatile during October but eventually ended the month at similar levels to where they started; much of the volatility appeared to be exaggerated ‘knee-jerk’ reactions to the weekly crude oil market data and data showing that rig counts are gradually declining, which is still required to balance the market and provide stability to the market. Most analysts now agree that while longer term fundamentals are supportive for oil, particularly from a wealthier China in the long term, such an analysis should not override the assessment of weaker medium-term fundamentals.

What’s the Outlook?
As we eventually move to winter temperatures, increasing volatility is likely to be the concern in the energy market; potentially driven by variations in temperature and forecasts, the state of gas storage fundamentals and any supply disruptions. Current UK weather forecasts indicate a warmer than usual start to November with temperatures only falling to seasonal normal levels for the second half of the month. So, if the forecasts are to be believed, the risks of an early-winter start are diminishing and consequently so do the risks of extended periods of high energy prices – furthermore, we have not had any indication of Russian related supply issues so far this year, which also bodes well.

Nevertheless, there should still be some concern related to short term volatility with spikes in demand and prices later in the winter (1Q16), especially if we experience the anticipated spells of more extreme El Niño induced conditions (snow followed by sustained high-pressure) disrupting renewable as well as coal fired generation. Accordingly, we would suggest some analysis by consumers to establish whether they have sufficient volume flexibility in their supply contracts to cover the eventuality of sudden large fluctuations in demand.