November 2017 was a reasonably volatile month for wholesale energy prices; markets were firm too, with oil prices rising ~5%, UK power ~10% and gas ~20% over the month. The price volatility was driven by both political, the pending OPEC meeting, and fundamental issues, primarily a colder than normal November, with signs that winter may be coming early this year.

With the market being so weather sensitive currently, particularly for gas, changes to forecasts could create opportunities.

Colder than normal weather provided the main influence on the UK gas market through November 2017, implying the possibility of an early winter. Accordingly, short term weather fed through to the winter prices as a whole. Whereas the market was generally strong through the month, prices took a dip in the middle of the month, giving a buying opportunity for many. Some uncertainty how the end month OPEC meeting might progress provided some added volatility, though the likely status-quo position did prevail.

Noticeably, whereas forward prices have still not reached the levels of last year, though prices for winter 2017/18 are about the same, the rolling-annual forward curve structure increased its backwardation, indicating underlying structural support for the market. If fundamentals remain, particularly if the weather forecasts stay cold, the trend is more likely to be up for gas than down over the coming months. Dips in gas prices should probably be considered opportunities to buy in some forward/winter cover rather than risk waiting for a continued weak spell. 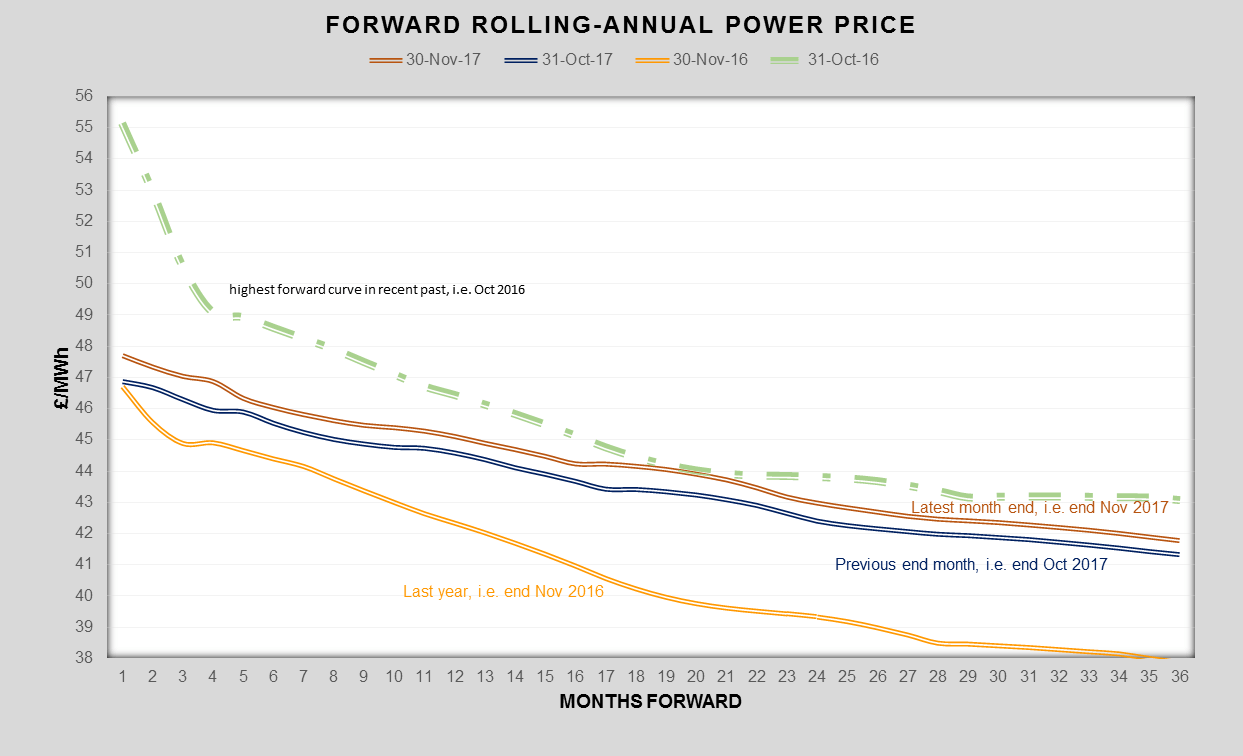 Throughout November 2017, UK power prices were also firm and volatile, led primarily by the stronger gas and coal markets during the month. Nevertheless, sentiment in the power market was not as committed as for gas, evidenced by the forward curve for rolling-annual prices maintaining, but not increasing, its backwardation, which is still less than this time last year, despite continued concerns related to French nuclear power plants. Interestingly, prices for specific forward years are approximately the same as in Oct 2016, the recent high in forward power prices, and so we continue to look for evidence as to whether the power market is near highs and about to turn to contango or at an inversion point where steep backwardation returns.

Brent prices continued firm during November 17, ahead of the latest producer discussions. While there has been some concern whether OPEC can maintain their discipline, it seems the signals point to continued stability. However, most analysts believe the real test will be Spring 2018, when it is expected that US production will have picked up, putting the supply/demand balance under pressure, especially if Brent and WTI crude prices can be maintained above $60/bbl.

Over the next months, market development will depend mostly on how the weather turns out in comparison to current forecasts. Most longer-term weather forecasting models predict generally unsettled conditions (i.e. more precipitation), though some forecasters are pointing to the possibility of colder weather emanating from the East (Russia) at least sometime during the winter, but whether the precipitation comes as snow or rain in UK is open to question. Consequently, the balance of probability is currently suggesting stronger to steady gas prices but much more variable power prices in UK, which may come down primarily to the performance/production levels of the wind farms in UK.