November 2016 was a volatile month for energy prices across the spectrum; UK gas and power prices generally moving down after a multi-year peak during early November, whereas oil prices dipped before running up at the end of the month on various oil producer meetings. Market volatility was driven by both political and fundamental issues, many of which just seemed to increase uncertainty rather than provide the stabilising effect anticipated.

Gas:
Like last month, the power market provided the main influence on the UK gas market, though other issues increased in relevance, particularly the improving supply status of LNG and signs of Rough storage preparing to return. Gas fired generation levels were also more stable. Despite the cold snap towards the end of the month, near term temperature forecasts looked to be higher than seasonal norms, easing concerns of winter supply issues. The result was a lower market price, about 8% down over the month.

Nevertheless, the rolling-annual forward market structure held its slight backwardation, perhaps even increasing it a bit, indicating underlying structural support for the market implying the longer-term trend is more likely to be up than down over the coming months. While it is impossible to predict market movements with full confidence, the short-term weakness could be considered a prudent opportunity to buy in some forward cover. 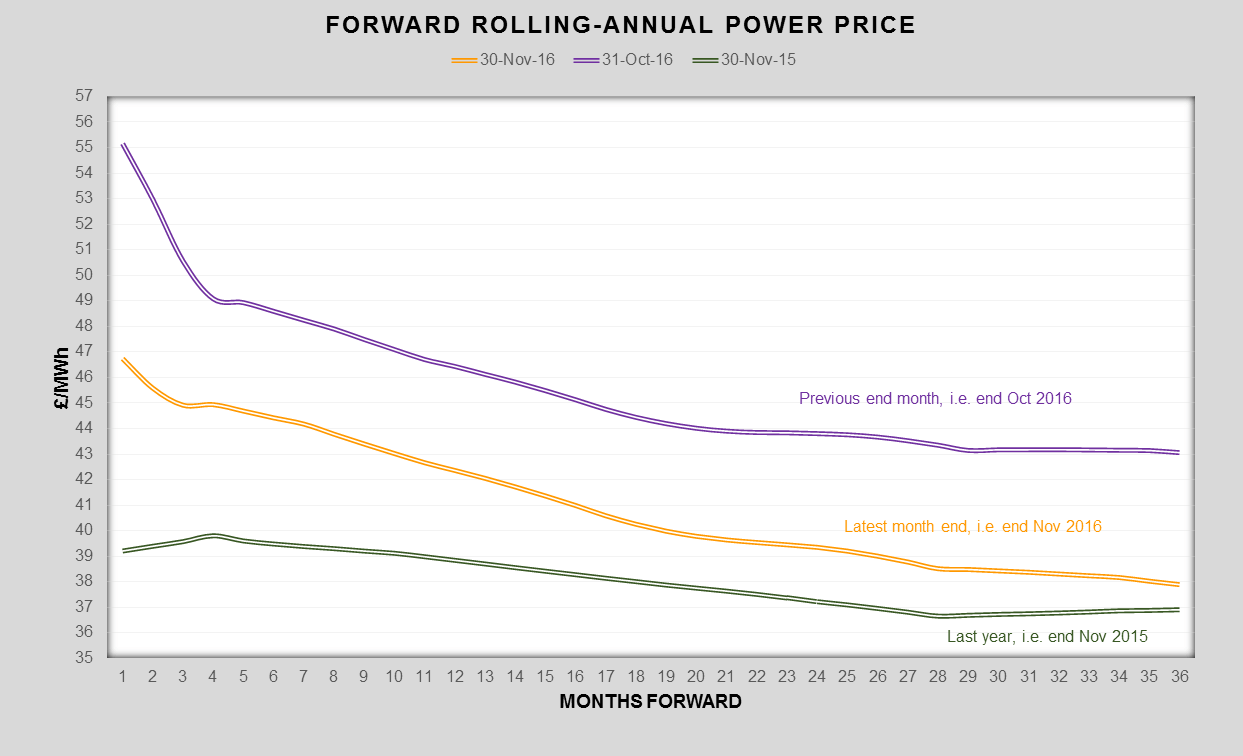 November 2016 UK power prices were also volatile and while the forward curve for rolling-annual prices maintained the backwardation (albeit reduced from last month’s backwardation), power prices dropped significantly during November; dropping more than 10% across the curve, after reaching a multi-year peak early in the month. The primary reason prices dropped was that concerns related to French nuclear power plants, adversely affecting UK supply during winter, abated. Spot and month-ahead prices had included a high risk-premium because of the concern and consequently this disappeared within-day because supply wasn’t actually impacted. This, combined with politically induced improvements in the £/€, improved weather forecasts for December and other supply variables, worked together to push prices down. As with gas, these price movements have presented opportunities to buy in forward cover.

Oil:
Brent prices dropped during early November and then picked up again during the second half of the month in anticipation of the producer discussions (OPEC and some non-OPEC oil producers) – the talks were potentially constructive for oil prices; assuming agreements hold, OPEC and some non-OPEC production will be managed in a coordinated manner from 1q17. However, several issues that need to be considered have been raised by the various oil analysts, which cast doubt on the real success of the discussion. Interestingly many analysts believe that if OPEC hadn’t attempted to manage their production,  the market would have forced non-OPEC memebers to do so themselves – in fact OPEC’s meetings have encouraged prices to rise and so many US producers were able to hedge their production at higher prices. Also negative for the agreement, both Nigeria and Libya have increased their production recently and with no production limitations in December stocks can be built. Accordingly, existing predictions of $50-$55/bbl for Brent during 2017 have not changed.

What’s the Outlook?
Over the next months, market development will depend on potential supply disruptions from French nuclear generation, gas storage or political interference during annual pricing discussions for large European gas buyers. Conversely, mild weather and quiet markets will lower prices further.

Another development to watch, which will help provide pricing signals, will be the award levels for National Grid’s security of supply auctions – these have all recently closed at quite low levels, that do not encourage new build, and if this continues, sooner or later forward prices may disconnect from spot prices.

Finally, another interesting development to watch is the survival, or not, of the many new small independent suppliers, whose existence may be threatened if prices continue to increase – we have already seen the demise of a few, most likely because of poor or non-existent hedging strategies; while this shouldn’t have too much impact on price in the short term it could reduce market liquidity.