November 2015 was a much more volatile month for spot gas and electricity price. Forward prices dipped to a low during mid-November before increasing towards the end of the month. Nevertheless, all prices, apart from spot and day-ahead prices ended the month lower than they started. Oil prices continued their bearish trend.

Forward curves for the rolling annual prices are now beginning to show much more backwardation, particularly in electricity, indicating serious consideration should now be given to a more forward buying strategy.

Gas:
In general, gas prices continued their weak trend until mid-November, when more bullish news from Holland, relating to the Groningen gas field, coincided with a drop in temperatures, to push most prices up. Nevertheless, prices ended the month lower than they started with average UK temperatures again returning to well above seasonal normal, albeit some regions of Britain did see snow for a while. Gas storage levels also dropped, though with a good fundamental supply position and weak oil, the move up in price was not as great as some might have expected. However, it is worth noting that the forward curve structure has shifted, showing a noticeable change to backwardation – this suggests a change in market sentiment and more conviction in the development of a stronger market with an increased possibility of higher prices to come.  Accordingly, we would anticipate more consumers should start fixing in purchases forward, perhaps for the winter months of 2015 or even winter 16. However, some caution is still required as short term fundamentals are still good, reflected by the nearby contango in the rolling forward curve, so fixing the whole year at this time may be too soon. 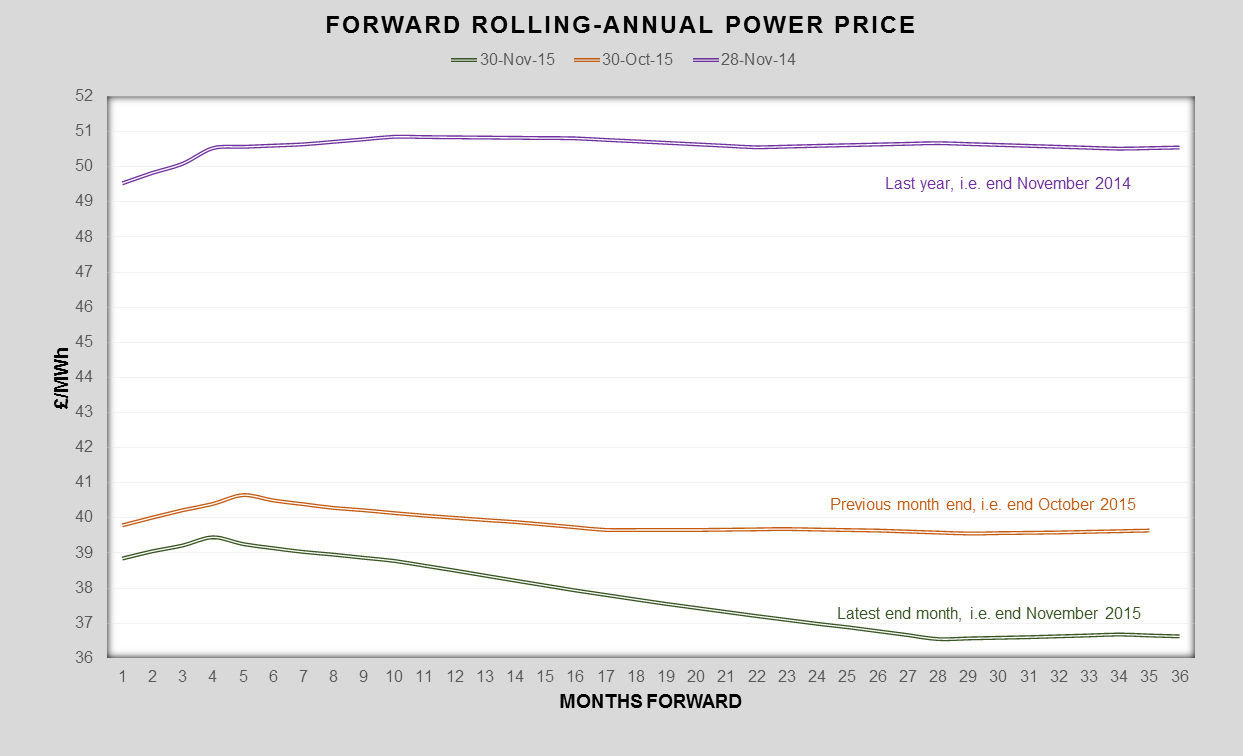 November UK spot power prices were also volatile and forward prices maintained their high correlation with gas. Wind production was good, though November 2015 was officially the dullest (i.e. very cloudy) November on record. Most prices hit a low on 12th to 13th November and thereafter prices picked up as temperatures dropped and on concerns about future gas supplies. From this point of the month on, backwardation in forward prices became the talk in the market, as an increasing number of commentators noticed winter 17 and 18 were trading lower than winter 16. As we approach April 2016, and the demise of coal generation becomes more real, it is quite likely the differential in these forward prices will increase.

By the end of the month the backwardation was even more evident, and certainly in electricity more so than gas, though the unusual kink in the early part of the curve diminishes some of the conviction. Consequently, we should expect a slight shift to a longer term purchase strategy over the coming weeks, in line with gas.

Oil:
Brent prices have continued to drop with prices approaching the psychological support level of $40/bbl. Many commentators now believe there will be continued weakness until a decisive decline in US supply begins to materialise and perhaps as long as Iranian volume remains an uncertain quantity; even at that point it will still be some months before market participants are convinced that genuinely tighter conditions are developing – perhaps we will have to wait a further year, or even in to 2017, before we can expect a more normal profile of supply and demand to emerge.

While no action is expected at the December OPEC meeting there are alternatives to a cut, which fall generally under the heading of verbal intervention of some flavour.  Hawkish commentary costs nothing and may help to boost prices and revenues for cash-strapped OPEC member nations – talk alone will have little lasting effect though.

What’s the Outlook?
Developing backwardation in the rolling-annual forward curves indicate a likely change in sentiment is imminent. If this is supported by fundamental improvements, perhaps as a consequence of tightening storage combined with inclement weather forecasts/conditions, gas disruptions and increasing signs of constraints in power generation capacity we may see prices start moving up. However, the market is still in balance fundamentally and if belief grows that we can get through winter without any serious supply problems we may well revert to contango and a return to market weakness.

Perhaps the smart money is on a few months of stronger prices, followed by a return to contango after a cold January and February.

Longer term, we see the oil market being less significant as a driver with analysts looking more at total BTU supply/demand  balances, especially as the relevance of both renewables and LNG impact globally.