Annual UK energy prices moved down then up within a 5% range during May 2017, ending the month slightly up by the end.

The forward curves for rolling annual prices moved little reflecting little change in market structure and sentiment, despite an extension to the OPEC production agreement and UK General election jitters. The market also shrugged off further negative news about production levels from the Groningen gas field. 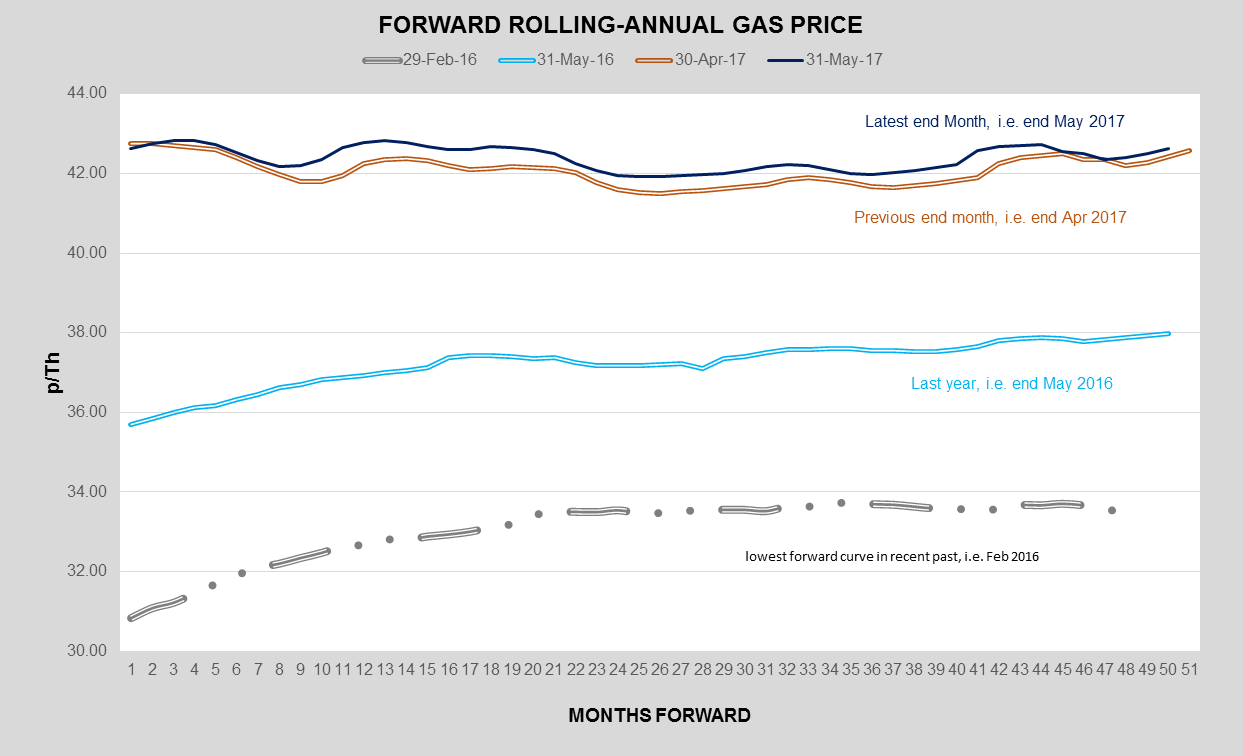 We saw little change in gas market indicators this month despite some news that would ordinarily be considered bullish, in particular, an announcement that the Groningen gas field would be further constrained and a 9-month extension to the OPEC production agreement. Such a response to reasonably bullish news would normally be considered as implying an underlying negative sentiment. However, with negligible changes to the forward curve for rolling annual prices remain essentially flat there would appear to be little change in market structure from the non-committal sentiment we have seen for several months now. Something significant will probably be required to spark a strong move in either direction.

Accordingly purchasing recommendations for gas should be one of caution and buyers should continue to use any flexibility to spread buying decisions out rather than risk fixing long term all at one time.

Movements in UK power prices were generally consistent with the gas market, moving down during the first part of the month then rallying latterly to end the month slightly up. Improving weather conditions reduced demand a bit compared to normal in May though any price benefit was offset by lower wind power production. The forward curve for rolling annual prices changed little, maintaining a relatively strong backwardation, so continuing to imply sentiment is for higher prices over the medium term. As commented previously, in such a market structure it is generally sensible to lock-in some of the longer dated forward prices as they still look to be reasonably good value.

Oil prices were primarily OPEC watching this month, who did pretty much what was expected. The most positive aspect for the recent agreement to extend capped production levels for a further 9-months was the ease which it happened. Also, there were supporting signals from the group recognising that management of production will need to consider increases in production (to agreed levels) in Iraq, Libya and Nigeria who have all had production constraints recently, but are coming back over time. It is worth noting, that this OPEC agreement, designed to stabilise prices, rather than overtly increase them, has held well compared to historic agreement though the market will be watching carefully to identify any weakening in resolve. Other aspects to watch going forward are signs of increased demand in US though this could be off-set with further signs of increases in shale production. All in all, oil analysts are generally holding predictions steady though increasing attention will revert back to the attention on Indian and Chinese demand, which could help push the market in either direction.

What’s the Outlook and the UK General Election?

Over the next month, the outcome of the UK General Election could provide significant influence on future direction and development in the UK energy market. While not wishing to make any political judgement, a brief look at the energy policies set out in manifestos for the two main parties is worth some consideration.

Both parties are proposing some sort of price capping on retail prices, aimed primarily at domestic and so called ‘micro-businesses’ consumers. However, from an economic and market theory perspective, any price capping tends to cause markets to move up to price cap levels and reduce competition, benefiting those on tariffs while increasing prices for those who shop-around for better deals; it was last tried in the UK many years ago – the days of the pool – and markets did indeed move up to the price cap levels. Bearing in mind a substantial driver for retail price increases has been levies and subsidies to support renewable and nuclear generation – plus capacity payments to support other generation and DSM (demand side management) – such caps on retail prices will reduce supplier margins even further and may even impact the long-term sustainability of several suppliers, again reducing competition. Whereas both policies are like using a sledgehammer to crack a nut, the Conservatives’ policy is to have a cap aimed at tariff customers only and being wholesale market related, while Labour are being more blunt aiming for a maximum bill level.

Apart from Labour looking to create a ‘national’ energy company to provide competition with the existing suppliers, the other main difference between the parties is Labour have explicitly stated no to shale gas, whereas the Conservatives are pro-shale. Labour’s intent may be honourable, however, shale gas is likely to keep costs and imports down, providing some additional energy security for UK; unfortunately, we (UK and globally) are a long way from being able to meet our energy demand and flexibility requirements primarily from renewable sources and will be reliant on thermal energy sources for many years to come.

Finally, it is worth noting that the FX market is already talking about a ‘Corbyn Hedge’, should Labour win, essentially selling GBP against either US$ or €. Depending on your view of the success of a potential Labour Government, this may only be a short-term impact, though in that time a weaker GBP will increase energy costs for UK.