Throughout May 2016, oil prices made further gains, driven this month by some reasonably significant disruptions to supply from producers such as Nigeria, Libya, Venezuela and Iraq, not forgetting the concern that fires in Canada might add some constraints. With Brent now trading around $50/bbl, the risk of upward spikes still remains. UK energy prices were reasonably volatile throughout May reflecting quite large variations in weather patterns and resulting swings in system demand.

Generally, both UK gas and power showed increases in nearby prices with forward prices remaining relatively stable, resulting in clear backwardation for power and decreasing contango for gas in the forward curves for rolling annual prices – another month of such moves may be sufficient to confirm a committed change in sentiment across the market.

Gas:
Gas prices were relatively volatile throughout May, particularly in the more prompt delivery months, primarily because of the very unsettled weather conditions – May experienced seasonally very warm as well as very cold and wet weather patterns. Also of note in May was quite volatile supply variations of Norwegian and UKCs gas production, with curtailments often coinciding with bullish oil news; nevertheless, LNG supply was steady. Oil prices and FX rates also impacted the gas price somewhat, perhaps overly so as the market was quite sensitive.

Interestingly, by the end of the month gas prices showed less contango for the Rolling Annual forward curve, perhaps indicating a possible change to a more bullish sentiment, albeit not very convincing at this stage; however, a repeat of this movement for a further month could be quite significant.

Consequently, trading advice is edging to a more bullish strategy with increasing indications that energy should be bought slightly forward, say 3, 6 or even 9 months forward. Nevertheless, it is by no means certain that prices will not weaken again and so covering all requirements now may not be the best way to beat the market. 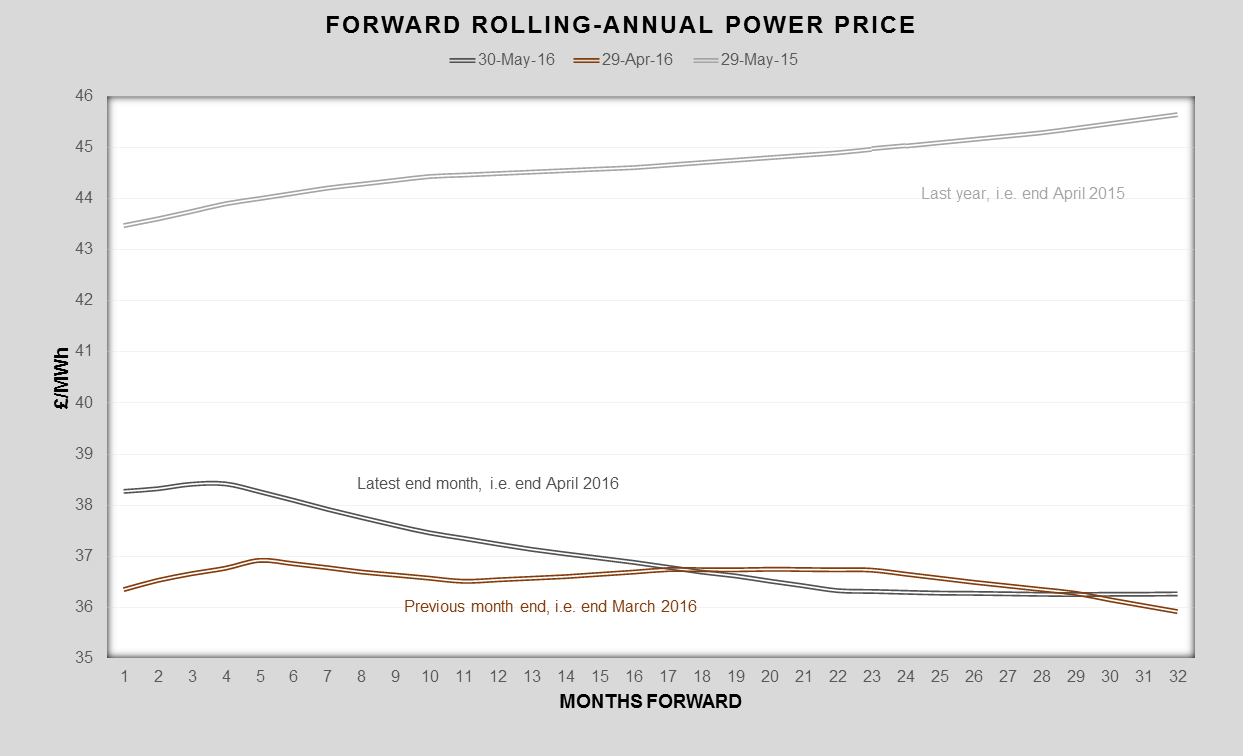 Oil market movements also impacted the power market, more from a psychological perspective than fundamental – If anything the volatility of the UK energy market just provided further support to a curve that is already looking nervous.

Backwardation increased for the Rolling Annual forward curve for power, potentially providing further encouragement for a strategy change to more forward buying. While such a strategy change may be slightly premature, it could well represent a prudent approach and is likely to be a common strategy in the market. While a warm summer could bring in lower prices, so far spring has been relatively cold and this can influence strategy.

Oil:
Brent prices have been significantly impacted by the many disruptions in supply from several producers – while currently these disruptions are not enough to impact the supply position in the long term, it has ‘spooked’ the market that such disruptions could become more common place. The risk of supply disruption seems more apparent now than for a while and even though they may not be long term factors, the potential volatility in supply will increase the likelihood of upward spikes as we enter the US demand season. However, the market needs to be mindful that if disruptions cease and other producers, like Iran, continue as before oil surpluses will be a regular feature of the market again.

What’s the Outlook?
The EU referendum is probably the most significant event over the coming month, though the impact on the UK energy market is not obvious – depending on who you believe almost anything can happen. However, looking at it dispassionately it seems probable that the long term impact of a BREXIT may not be too dramatic, whatever you believe. REMAIN supporters say the economy will worsen causing a drop in FX rates, which in turn would increase UK energy prices. However, if the economy worsens so will demand, which will increase the supply versus demand in UK and therefore will reduce the price and thereby reducing/offsetting any impact of the weaker sterling FX rate. Furthermore, it is important to recognise that energy is really a global issue and from this perspective a BREXIT will not have a big impact on global supply/demand. If you believe the BREXIT campaigners, the FX rate may improve (reducing the cost of energy), but the markets will improve (thereby offsetting the benefit of the FX change) – both scenarios seem to counteract.

It also is worth remembering that the European energy market and policy is not really an EU member-state issue but more a wider European issue; such policy issues are not likely to be changed with the UK as part of EU or not – as long as the UK is part of Europe as a continent and linked for energy purposes, being part of a political EU is not significant.

However, what is likely (whatever the result) is that we will see an increase in volatility in the £/€ going in to the referendum, and probably a weakening, which is likely to cause short term increases in price. Perhaps the wise thing is to leave buying decisions until after the referendum and so the related uncertainty will be gone and the volatility reduced.