Winter revisited UK’s energy market again during March 2018 and whereas spot and day-ahead prices did respond, it was not as much as in February. However, this time forward prices reacted much more aggressively. Furthermore, negative news regarding the Groningen gas field added to the longer-term supply concerns, providing additional price support. So, despite a widely expected sell off once the cold snap dispersed, prices, particularly forward prices, surged as many buyers, who were waiting to cover Summer18 months after the cold weather, all rushed in at the same time to buy before the April 18, 2Q18 and Summer18 contracts stopped trading. Oil prices were also strong in March touching recent highs of $70/bbl again.

The forward curves for rolling annual prices responded to the stronger sentiment by increasing their backwardation as annual prices jumped more than 5%.  As the month came to a close, prices did look to be easing somewhat due to April weather forecasts edging to slightly above seasonal normal temperatures.

Forward gas prices ended March 2018 levels 5-10% higher than where they started with nearby annual prices reaching levels not seen since the end of 2014, though generally prices were slightly lower than the highs seen earlier in the month. The forward curve for rolling-annual prices strengthened somewhat (increasing backwardation) as nervousness appeared to be a feature in the market.

It is worth considering the confluence of events that supported the prices rises over and above just a reaction to ‘the beast from the east’; oil prices increased, which causes forward gas prices to rise because many long term, primarily Russian, supply contracts are oil price related; concerns about future supply due to constraints from Groningen going forward and partly because without Rough storage (while the UK could manage one really cold snap) the market was much more nervous about two or three, particularly at the end of winter when storage levels will be at their lowest. The market fell in to a false sense of security from recent years that winters wouldn’t be as constrained, however, such an increase in demand at the turn of the season tested the market resolve. On top of that several LNG cargoes scheduled for March delivery were delayed. Furthermore, with many technical indicators in neutral territory, i.e. with the market looking for direction, the bout of ‘short-covering’ towards the end of the month spooked the market.

As we move through spring, with longer days and warming temperatures, apart from some day-day fluctuations the market should become less sensitive to the weather though fundamentals have shifted slightly so future direction will be hard to call. 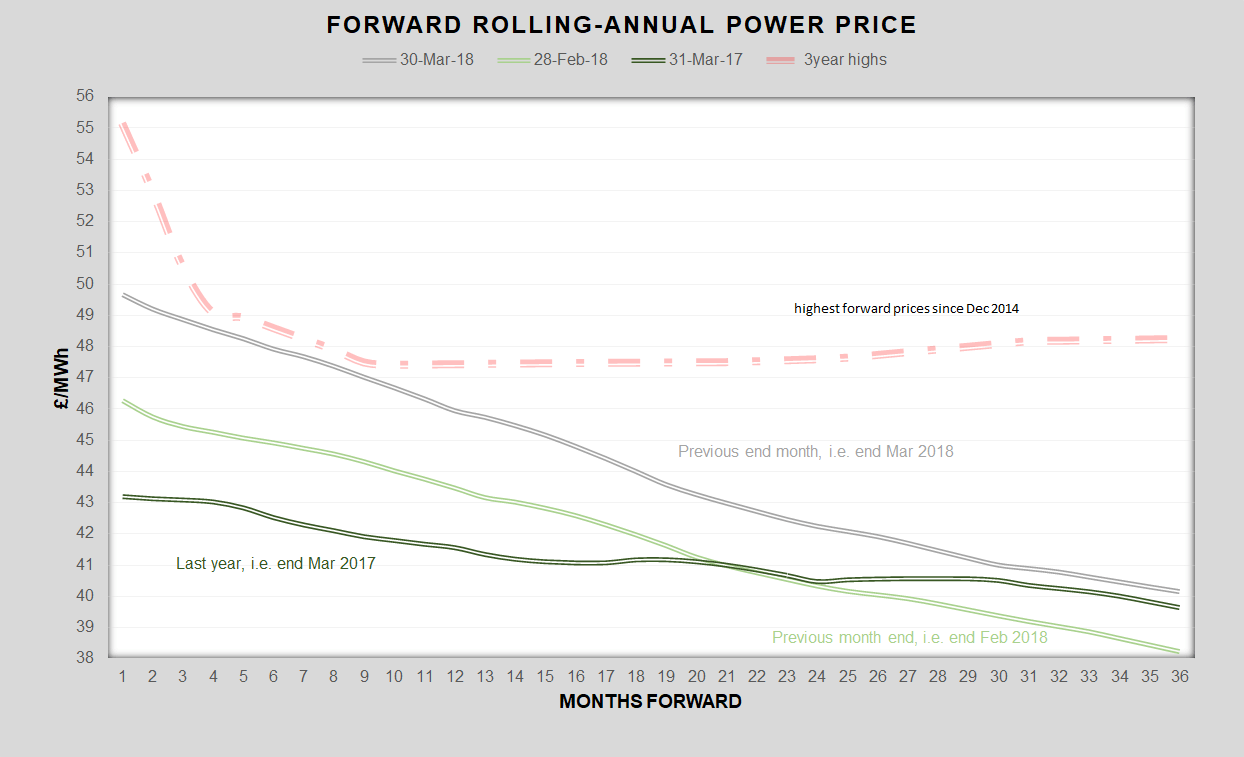 Unsurprisingly, power prices moved in a similar fashion to gas for essentially the same reasons, though if anything forward power prices moved up even more than gas. This can partly be explained by looking at the CO2 emissions market, which also rose during March – in fact it has been rising most of 1q18. This demand for CO2 reflects a likely increase in demand for coal (and maybe even oil) to meet electricity demand throughout Europe as a consequence of higher gas demand to meet heating requirements; combined with increasing levels of intermittent renewable energy, which can’t be relied upon at times of need, forward generation cover had to be secured just in case.

Interestingly, whereas power prices moved up in general, structurally, the forward curve for rolling-annual prices didn’t change as much as gas, implying a slight adjustment in fundamentals but not in market sentiment.

Oil prices increased throughout March 2018, with Brent reaching $70/bbl again. This is despite an increasing rig count and general increasing US production levels. Analyst views are split with some saying recent crude oil inventory data offers continued support for prices and reinforces the sense that no dramatic sell-off is on the visible horizon. Whereas others expect the supply deficit of the past couple of quarters to give way to a surplus, driven largely by strong growth in US oil production. Supply risks in Venezuela and Iran may perk up the market but will probably not change the market balance significantly. This time last year the view was that the oil up-trend could continue to mid-2018 – let’s see.

Fundamentally the late winter will have depleted storage stocks more than anticipated, which will add demand over the summer months, oil is currently holding high price levels and Groningen’s curtailments all add support to prices, whereas normal (or even above seasonal normal) temperature forecasts, a large number of LNG cargo deliveries (many delayed from March), the probability that several buyers got March wrong and the possibility of higher coal stocks than anticipated all suggest bearish factors which could help prices go down – as we have seen over the last 9 months, the market is in a difficult phase for buyers and this may well continue in to 2q18. The best strategy may be to extend contracts now and book in some forward purchases while minimising exposure to prompt/near-term volatility allowing sometime for the market to settle.