UK energy prices generally dropped over the month despite a small rally at the end of the month, prompted by nervousness in the oil market related to supply disruptions in Libya and further rhetoric in anticipation of an extension in the OPEC production cap in to the second half of the year. March was a relatively stable weather month, with slightly better than normal temperatures generally; near term weather forecasts anticipated better than usual conditions.
The gas forward curve for rolling annual prices reduced its backwardation slightly, though forward gas prices were generally little changed over the month. The electricity curve also reduced its backwardation with forward prices increasing slightly on the month and nearby prices dropping.

Forward gas prices ended March 2017 at similar levels to where they started though prompt prices were generally slightly lower. With the forward curve for rolling annual prices weakening again (decreasing backwardation) further nervousness may start creeping in to the market on any bearish news. Most other technical indicators are in neutral territory at the moment, with the market looking for direction, which will perhaps come from any oil market developments. Coincidently, this time last year we had a gas forward curve tending on the brink of backwardation, and this was followed by a period of uncertainty, before we saw some recovery in the market. Like last year, the underlying nervousness was coming from analysts looking at the oil market and wondering what the oil producers were going to do!

As we move through spring, with longer days and warming temperatures, apart from some day to day fluctuations the market will become less sensitive to the weather. Attention starts to focus on longer term storage for next winter and availability of Rough – will it come back on stream in a timely manner and in line with currently expectation for a July return? I’d anticipate further complications just in case. 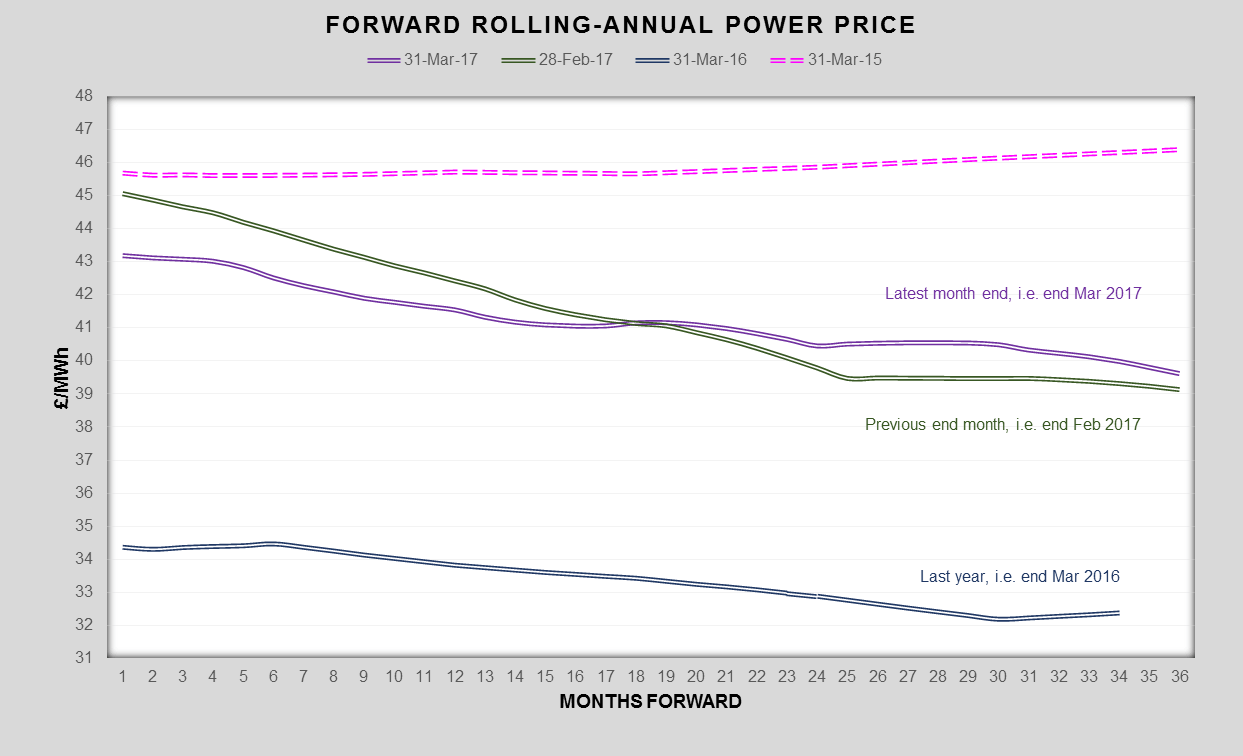 This month, wholesale power prices dropped at the prompt end of the curve and increased forward, weakening the backwardation. Whether this is a sign of a structural shift or just regular curve volatility is hard to say. Over the last few months we have seen a continuous drop in prices whilst the forward curve has held its structural strength; this implies we are still in a dip (albeit quite a big dip!), looking to the market for something to give price support. As for some other energy commodities, analysts and market technicians are non-committal thinking we could see a move in either direction depending on what the next trigger is. Nevertheless, based on the evident backwardation it is perhaps more likely that we should expect the market to react more to bullish news than bearish.

Over the past year, crude oil prices have trended up; Brent from low 40s to mid 50s, primarily on the back of OPEC producers attempting to keep a cap on production. However, one consequence of the relatively clear trend is an increasing rig count in the US, with an associated increase in domestic production. This improving supply position in US is happening slightly quicker than expected by many respected oil analysts and while price expectations for 1h2017 haven’t changed from the $50-60/bbl range, some analysts now think the market will peak end 2017 and perhaps return back to the $50/bbl level sooner than expected, say in 1h2018. Of course, one of the key elements to how the oil market evolves depends on what kind of response we see from OPEC (and Russia) when the current production cap agreement ends; new quotas will really be needed and adhered to otherwise we might see weaker oil prices even earlier. However, a committed and believable effort to manage production could see the oil trend continue to mid-2018.

Little of fundamental significance occurred this month to drive the market strongly in one direction or the other over the short term, though it is interesting to compare prices to this time in 2016 and 2015 (see charts); in both cases, current prices are well ahead of 2016 and remain lower than 2015. The most notable difference is that both electricity and gas forward curves are structurally stronger (backwardation), which continues to imply prices are more likely to move up over the medium term than continue the downward trend seen over recent months- it remains prudent to balance any hedging strategy along these lines.