Despite renewed volatility and some recovery in the oil market, the UK’s wholesale energy markets were only remarkable in their lack of any real change from last month. While the gas forward curve for rolling annual prices increased its contango very slightly, forward gas prices were generally little changed over the month. The electricity curve hardly changed at all, retaining the same slight backward structure. While some of the stability can be attributed to the holidays around Easter, little of fundamental significance occurred to drive the market in one direction or the other.

Fundamentally, the recent theme of over supply for hydro-carbons still holds with a slightly stronger supply/demand balance for power being evident in future years. Accordingly, we currently see little evidence of anything of substance that might cause the market to move substantially from its current course.

Gas:
Forward gas prices ended March 2016 at similar levels to where they started though generally prompt prices were slightly lower and forward years slightly higher. This is not out of line with the slightly bearish contango nature of the gas curve, in fact the contango did increase very slightly too. This time last year, we had a gas forward curve tending to backwardation, however, this only led to one of several ‘false bottoms’ in the market. Like last year, the underlying nervousness is again coming from analysts looking at the oil market, which continues to be driven by speculation about a deal between major producers to limit production, though this will do nothing to reduce availability, just limit the increases to whatever Iran can achieve.

As we move through spring, with longer days and warming temperatures, apart from some day to day fluctuations, the market will become less sensitive to the weather as attention starts to focus on the slow build of longer term storage for next winter.

Bearing this in mind, we should not forget that forward curves for rolling annual prices are still tending to contango and there is no shortage of pipe gas or LNG.

Gas prices, while low in comparison to previous years, can still drop further and may well be driven by political issues and FX rates more than fundamentals over the coming weeks and months. 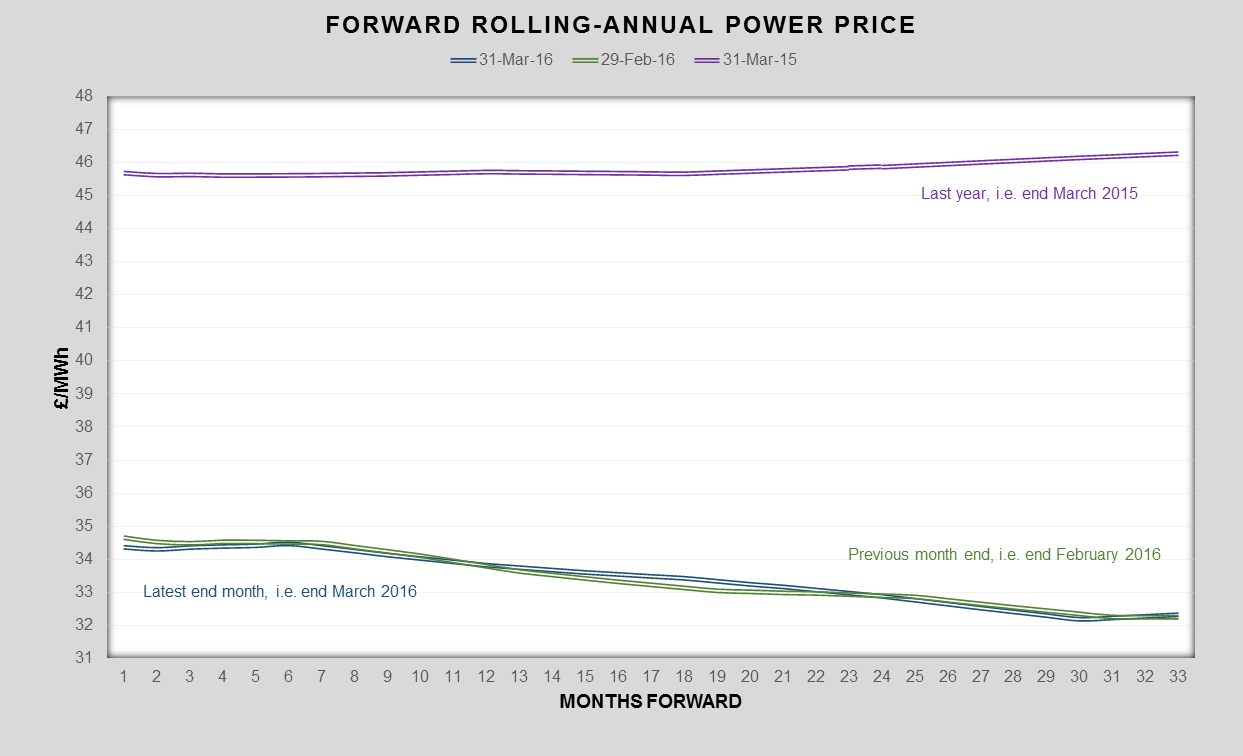 This month, power prices hardly changed at all, with the forward curves holding steady, maintaining the backward structure established last month. However, the realisation that coal stations will close without capacity market support is providing some concern in relation to the workings of the market. While recent records for renewable generation has been lauded by many, as a consequence we will begin to see an increasing impact on volatility of spot prices. Accordingly, we should expect near term volatility to increase and increasing backwardation to help support prices when renewable generation falls.

Oil:
While Brent prices did show some support over recent weeks, increasingly some market analysts believe the current level of pricing may well represent a happy medium for the market between the threat of market intervention from producers below USD 30/bbl spot and a premature incentivisation of US supply from a higher forward price; a 2018 WTI price of $60/bbl is seen by many as an incentive to increase production (it is currently below $50/bbl). Current forward prices will probably lead to a decline in US production though some need to re-incentivise investment in US onshore drilling sometime in 2017, which might be necessary to keep the market in balance at that time.

The other concern for oil prices is the renewed boost in the volume of oil in floating storage, which threatens to suppress the market once it is withdrawn; with the oil market in contango, these deferred surpluses may well re-enter the market within a matter of several months, suggesting that oil prices can’t achieve a sustained recovery until after the summer.

What’s the Outlook?
As we have seen for several months now, many third party intermediaries (TPIs) continue to say it is a good time to buy – if the aim is to beat the budget based on last year’s prices, then why not.

However, while gas prices are low we could see lower levels as the summer progresses, especially if oil fails to make a sustained recovery before 4q16. So if the aim is to get the best price, in the case of gas it might still be worth holding off.

For electricity, the story might be a little different and it may be more prudent to look at dips in the electricity price as an opportunity to buy partial forward cover; near term volatility is likely to increase as intermittent renewable generation levels increase and this alone may keep electricity prices supported a bit more than gas.