Annual UK energy prices held their ground during June 2018, though did firm a few percents at the end of the month; slightly less than last month’s increase. Prices were driven by a combination or lower wind production, higher air-conditioning demand and weaker sterling. Forward prices increased also on further news that Groningen gas production levels could be reduced quicker than originally planned.

The forward curves for rolling annual prices maintained their backwardated nature, though slightly reduced, reflecting a slight weakening in the bullish market structure and sentiment. 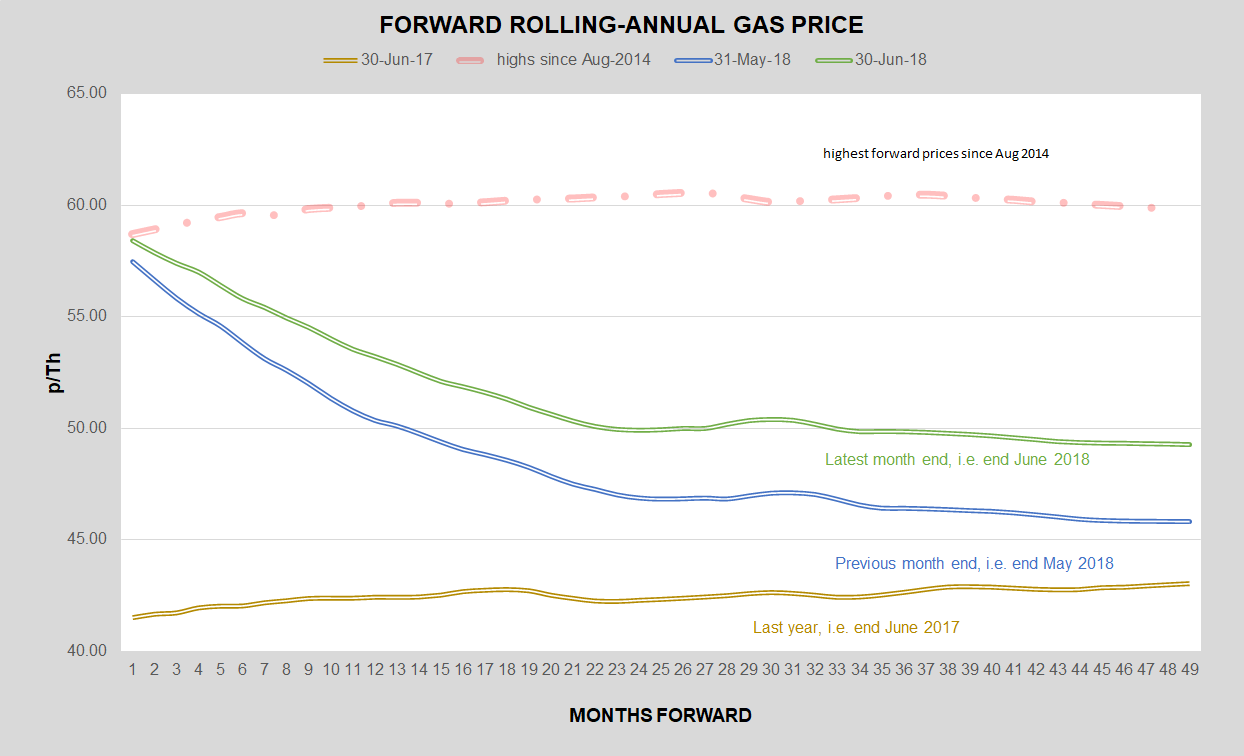 UK Gas prices, although with some day-day volatility, generally maintained levels until the end when prices jumped a few percent to end the month up slightly. Like last month, despite warmer than seasonal normal temperatures on average, weather conditions led to increased gas demand for power generation both to replace wind and meet increased gas exports towards the end of the month as £/€ weakened, which also coincided with the end of some planned Interconnector maintenance. A letter from the Dutch economic affairs minister to the Dutch parliament added further upward momentum, claiming that gas production at Groningen could be reduced to below 12bcm by October 2020, 2 years ahead of schedule.

Movements in UK power prices were again generally consistent with the gas and oil market, keeping reasonably steady until a small pick-up at the end of the month. Warm, or rather hot, weather conditions initially reduced demand compared to seasonal norm but then picked up with increased air conditioning. Wind power production was also down, increasing the use of gas for power generation. Unsurprisingly, solar generation production was high though still relatively small in the grand scheme of things.

The forward curve for rolling annual prices was generally a little higher, (~2%) compared to last month, though prompt prices did drop off slightly – whether this is a indication of weakness to come is hard to say at this time.

Oil prices dropped off initially during the month though picked up again, close to last month’s high, towards the final days of June; this is despite OPEC agreeing to a slight production increase. Analysts view OPEC’s action quite positively because it provides for a realistic level where supply discipline can be maintained. Nevertheless, prices are expected to revert to a more reasonable $70-$75/barrel range towards the second half of the year with OPEC’s recent action putting a cap on prices unless there are any unforeseen disruptions.

Over the next few months contract renewals increase, and many buyers must consider whether to fix in now (early) or wait until closer to renewal date. Of course, non-energy costs have risen significantly over the last few years and will continue to do so year on year. Whilst nothing can really be done about these costs, the question of whether to fix early or not will be relevant from a wholesale energy price perspective. While fixing prices early can help budget certainty, if that is truly important, however, fixing the energy price now or waiting a few months is essentially a punt on the market – do you think it will go up or not – and nobody knows for sure?

Recent market signals (i.e. backwardation and positive moving average comparisons) have tendered to encourage forward buying for those on flexible contracts and early renewal for those on fixed contracts. However, with price signals for electricity easing back a bit, fixing now or later, say during the autumn, may not necessarily be an easy decision. For those buyers with large enough demand, now might be the time to consider going flexible – not in order to leave purchasing decisions to nearer delivery, as would be recommended in a contango market, but in order to spread the buying, and therefore the risk, over the next few months; rather than punting on whether today, next month or even several months’ time will be a better price.