As we have seen in recent months, while there has been some day to day volatility, month on month UK energy prices have again changed little, generally moving up less than 1% compared to end May 2017.

The forward curves for rolling annual prices also moved little, reflecting little fundamental change in market structure and sentiment, despite an announcement that Rough gas storage will be closed.  The other factor that impacted on the UK energy market was the UK election; despite the result being less than decisive, it does at least mean the likelihood of excessive government intervention or the implementation of a hard cap on retail prices has subsided.

The big news this month was the announcement from Centrica that Rough will be closed. The market had somewhat anticipated the possibility, and so the price response was reasonably subdued, even though one might have expected winter and summer prices to show an increasing differential. It is still possible the true impact has not been realised yet; in fact, it might only be recognised should the UK experience a hard winter in 2017 or 2018. Of course, the increasing availability of US LNG exports may be sufficient to cover any winter shortfall in the short term. Longer term, a combination of energy efficiency and the potential development of UK shale gas (not available under any future Labour government) may further reduce any impact.

In this month’s Rolling annual forward curve chart, we have included the recent high and low curves, showing the current price stability and that prices are in the mid-range of recent movements – with a flat forward structure it is possible the market could move either way over the coming months; future wholesale gas market direction is not something we can be certain about at this time.

As for recent months, purchasing recommendations for gas should be one of caution and buyers should continue to use any flexibility to spread buying decisions out rather than risk fixing long term all at one time. 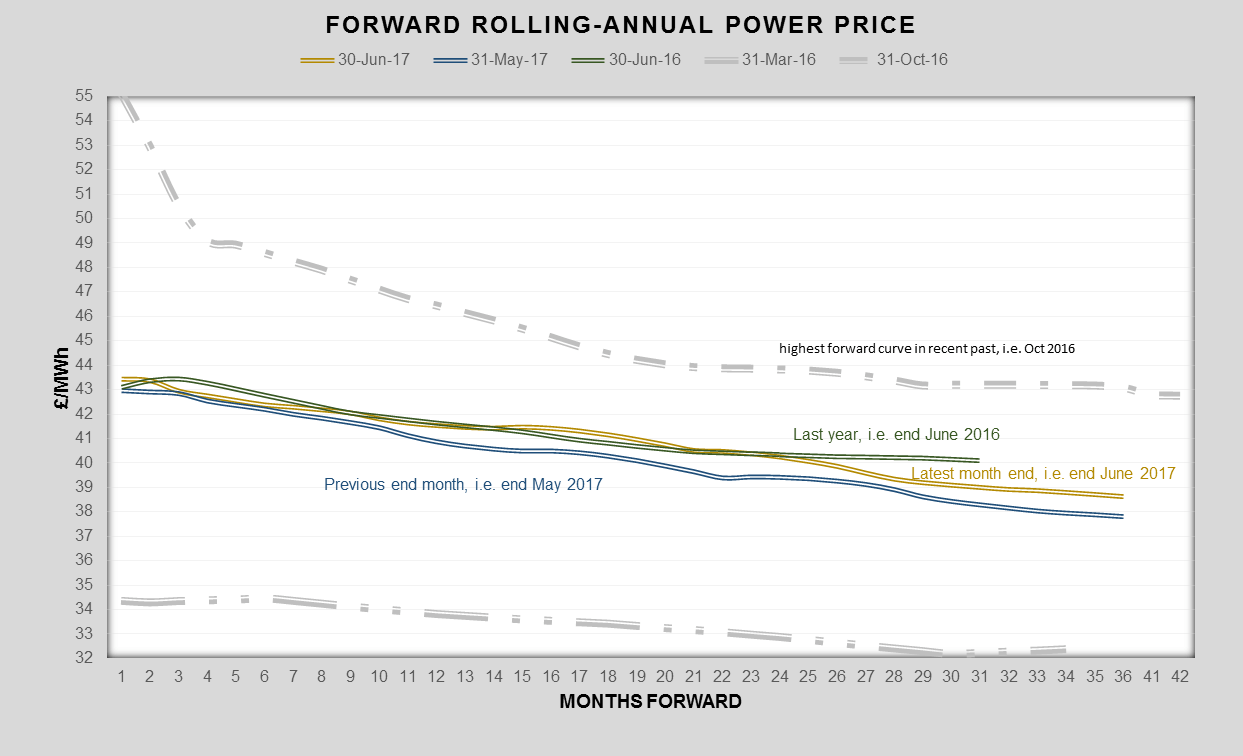 Movements in UK power prices were generally consistent with the gas market, moving up slightly month on month. As part of a general trend, we again see an increasing proportion of generation coming from renewable sources. However, while this is good for now, it will probable lead to National Grid buying more ancillary services, including demand side management, to provide the necessary flexibility for when the intermittent renewable generation is not available.

The forward curve for rolling annual prices remains in backwardation; as we see for gas, prices are currently approximately mid-way between recent highs and lows. However, the backwardation still provides some forward price value, if running a strategy to buy flexibly in portions, rather than taking a punt on future price movements by buying in fully on a one-off fixed price basis.

Oil prices were reasonably volatile during June, again primarily OPEC related but coloured by the production data from the US. With the market having digested last month’s OPEC production cap extension, some focus has diverted to how OPEC will exit the current arrangement. Furthermore, analysts are now recognising that the real swing production is coming from US shale oil and this is very economically driven – consequently prices over $55/bbl encourage maximum production (which results in too much so dampens price) and oil prices below $40-$45/bbl is too low and loss making for most price sensitive shale producers. The ease to turn the shale production on ultimately means the market has an implicit cap and floor, whatever OPEC decides!

The current state of the market is obscuring an odd mix of both stability and uncertainty. Stable forward curves do not generally last long and so some breakout, either way, is possible – though bearing in mind we are in summer and demand is generally lower in the UK for energy we still might not see any significant breakout for a few months. Accordingly, it would not be surprising to see the market drift off in anticipation of something happening to clarify direction. With renewable power generation leading the way at the moment, it might be reasonable to expect some prompt contango to start appearing in the UK power market. However, the resilience we have seen to date, holding the electricity backwardation, implies that some underlying bullish frustration exists, awaiting some bullish news – a difficult call right now and so probably a good time to discuss the non-commodity costs with your supplier as part of any future contract-renewal negotiations.