June 2016 has been dominated by the EU referendum, followed by concern about the fall-out.

Whereas UK energy prices in general increased steadily throughout the month, gaining more than 10% by the end of the month, only the increases in the second half of the month can be attributed to the Brexit referendum result. However, as mentioned last month, volatility increased as a direct impact of the referendum and as of to date, uncertainty still has not left the market. 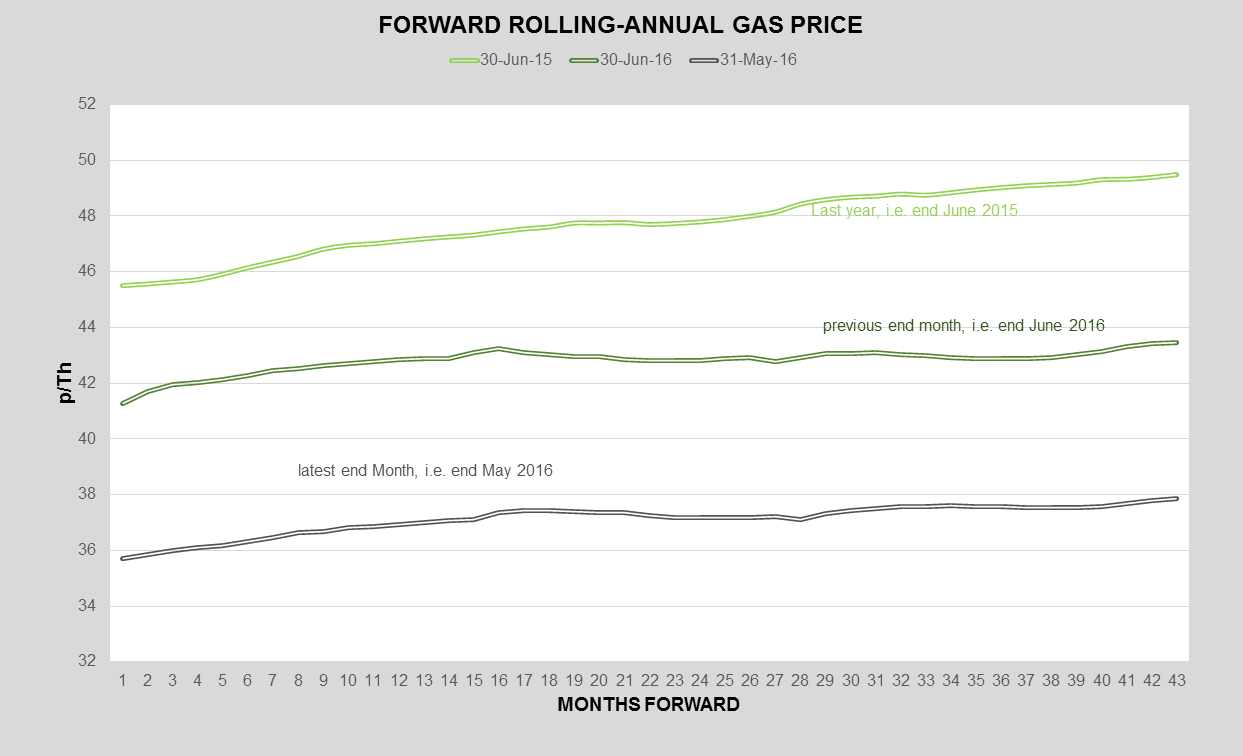 Gas prices have been relatively strong throughout June, however, we have only seen a very slight reduction in the contango for the rolling annual forward curve; this is probably because oil continues to show a contango structure, despite many analysts commenting that the oil fundamentals have significantly tightened due to all the recent supply disruptions as discussed last month. June was also colder and wetter than the seasonal norm and this, together with several different maintenance issues in Norway and Rough storage, added to price support. Nevertheless, looking forward the supply demand balance looks reasonably healthy, even after considering the recent announcements further capping production from Groningen.

Following the Brexit referendum result, regardless of the oil price dropping as a consequence, gas prices increased due to a weaker £/€ FX rate; something that will become a continuing theme over the next few months.

Trading has been somewhat nervous over recent weeks, while the market observes the fallout from the referendum, however, as volatility is likely to remain until the consequences are more fully understood forward procurement strategies should recognise this and be modified accordingly.  Buyers should avoid fixing all volumes in a single transaction and should spread the buying over an extended period in order to avoid the risk of completing their purchase on a high priced day due to bad fortune – spreading the purchases out over an extended period will reduce the risk and allow those with the right strategy to benefit from any of the continued contango structure. It is worth noting that while prices have been strong over recent months, levels are still lower than this time last year and structurally there is no fundamental need to rush purchases, though it might be prudent to buy slightly forward.

Power:
UK power prices, whilst reacting similarly to gas most of the month, generally have a significantly more bullish structure, with backwardation in the forward curve for rolling annual prices increasing further.

Accordingly, a more accelerated buying strategy makes sense for power, however, caution is necessary and again a managed procurement strategy is again recommended in order to avoid the upward spikes in what will continue to be a volatile market. The weak £/€ FX rate and poor summer will only add to the market support. The drivers to watch for that could help depress power prices will be a significant improvement in weather conditions and any reduction in oil prices knocking-on to gas.

Oil:
Brent prices have stalled somewhat in June as prices reached levels that may encourage increased production of shale oil. However, most analysts now believe the global over-supply position has been curtailed for the time being, perhaps sufficiently to allow prices in 4Q’16 to increase before supply increases out-strip demand increases once again. Nevertheless, many commentators are now much more confident that increases in demand will outweigh the increased supply come Summer 2017.

Unlike gas and power, the impact of Brexit on oil has been to reduce prices; because oil is priced in US$, the FX rate changes have the opposite impact, with both £/$ and €/$ weakening significantly post Brexit.

What’s the Outlook?
UK’s gas and power prices are likely to be more influenced by FX rate changes than anything else over the short term; this being the main consequence of the Brexit vote. The chart below plots the £/€ FX rate since 2002 and shows how much it moved at the end of June 2016 (i.e since the Brexit vote). In fact, it is also evident that FX rate moves have been a significant part in the general rise in gas and power prices throughout 2016 and perhaps explains why gas prices have been firm even though the contango market structure implies a reasonably well supplied market.

Last month we discussed the consequences of a Brexit vote, which in general was that over the medium to long term, once the FX market has stabilised, Brexit will not have a significant impact on energy prices. Of course, this assumes  the UK does not enter a 2008 style recession, which based on current economic fundamentals looks a reasonable assumption, even if a small recession can’t be ruled out should Brexit trade negotiations not go well.