While we have seen some upward volatility during June 2015, UK annual gas and power prices pretty much ended the month where they started. Oil prices also moved sideways, perhaps even down a little. Forward curves for the rolling-annual prices changed little month on month, remaining relatively flat to slightly contango implying some potential hangover of supply in the market. Ultimately, June 2015 will be remembered for other things than energy prices, with many traders getting distracted from the energy market looking for other stories to create interest. Thoughts went to Greece and not for the sun.

In such a market as seen in most of June, where there is little real conviction in market sentiment, wholesale trader discipline is very important and sometimes deciding not to trade is the best trade. Perhaps naturally, thoughts turn to the financial crisis in Greece and the potential for a so called ‘Greexit’ – Greece exit from the Eurozone – and how this might impact energy prices. This is actually a complicated question without a very clear cut answer. In reality, Greece does not have an impact on UK energy supply/demand (ok, perhaps a tiny LNG impact) and in itself is not a big economic factor for UK business. However, where the Greexit is having an impact is on the €uro and this is relevant to UK energy prices – generally wholesale gas and power prices go down when £/€ strengthens because it alters the supply/demand across the gas and power interconnectors with Europe. 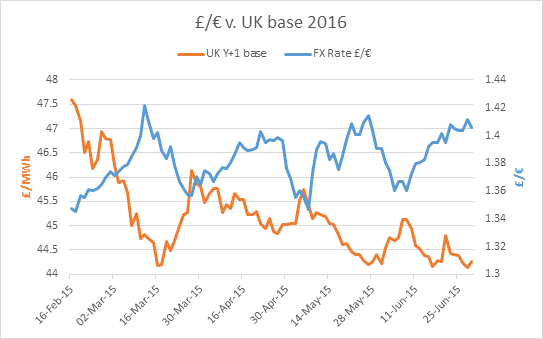 The chart shows the changes in the £/€ FX rate compared to the annual 2016 UK power price, from the middle of February 2015, when the last four-month loan extension was agreed between Greece and Eurozone, up to end of June 2015, coincident with the default of this loan. The chart shows a striking negative-correlation. While there is little doubt the recent move in the £/€ is due to a weakening € caused by uncertainty with Greece, and maybe the reverse at end February, it is less clear for the other moves; oil price impacts, the UK General Election and other macro-economic issues are more likely to have been the main drivers. Perhaps this helps explain why trading discipline is so important and dabbling in other markets, looking for justification to trade, can be dangerous. Nevertheless, there are some important things to consider over the coming weeks in relation to Greece, which may significantly move £/€, creating an impact in our markets. What if the referendum in Greece votes to accept the Eurozone terms; from a market perspective this will just maintain the uncertainty because it may well result in a new election in Greece and concern that the current situation will repeat itself come the next loan repayment date, though at least it keeps the Eurozone together – FX market analysts expect this to give a short term boost to € but longer term volatility and subsequently € weakness. If Greece votes against the latest Eurozone terms; the market expects this to be a precursor to a Greexit from the € – perhaps surprisingly many analysts believe this will strengthen the €, after an initial dip maybe, because there will be less uncertainty and a stronger Eurozone though there is concern it could undermine the single currency in the longer term if other countries decide to leave €. 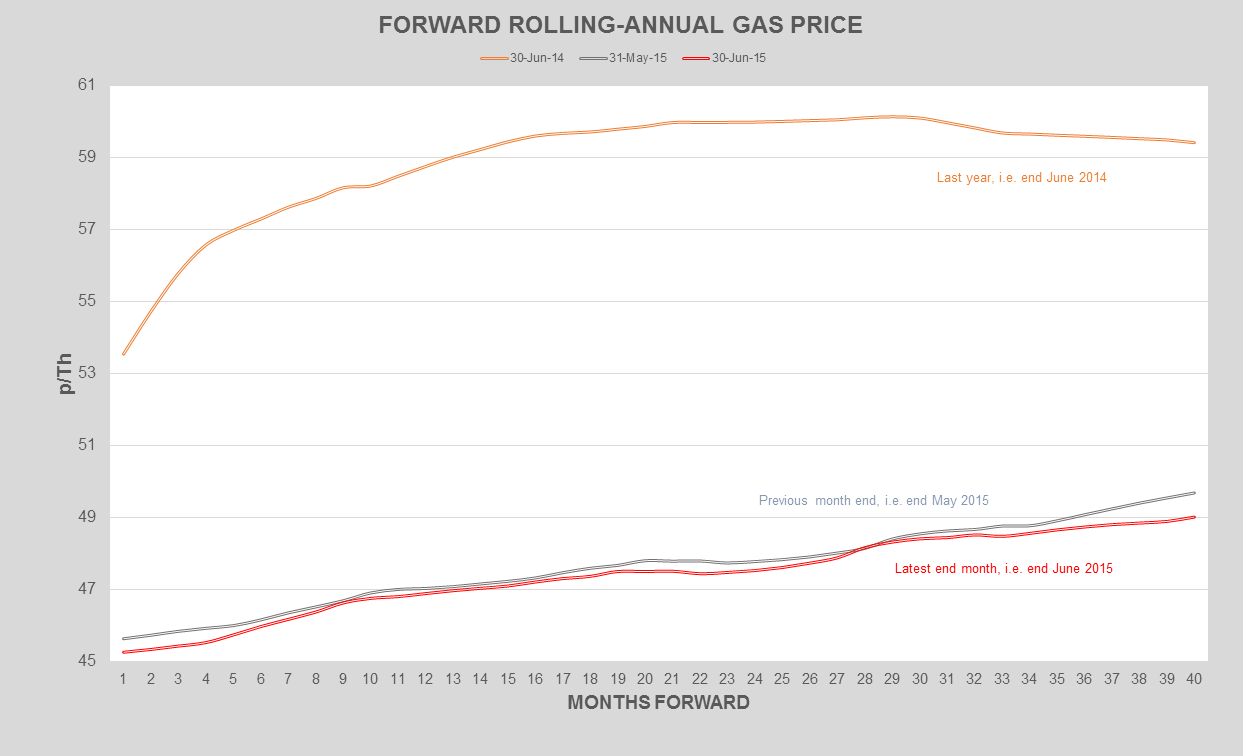 Gas:
Annual gas prices in June 2015, whilst ending the month where they started, were quite volatile with two upward spikes; the first due to a cold snap in temperatures and a spike in oil prices and the second due to anticipation that the Dutch government would cap production from the Groningen field at 10% lower volumes than expected. On both occasions annual prices dropped again either due to improving supply/demand fundamentals or a stronger £/€ (see above). The forward curve for rolling-annual gas prices, retained the same flat to slight contango structure indicating little or no change in market sentiment, which can be viewed as showing no conviction in market direction or at best a slightly bearish view.

Power:
As with gas, the power market showed some volatility within month but generally moved sideways. Power output from renewable sources, solar and wind, has been relatively good in June – early signs that power price movements are starting to reflect weather patterns more and more – helping to dampen volatility compared to what was seen with gas. Similarly, the forward curve for rolling-annual power prices remained pretty much unchanged, or if anything became slightly flatter, demonstrating a lack of market conviction, awaiting some shift in fundamentals or sentiment to change the market.

Oil:
Brent prices dropped again slightly during June 2015, against the norm for a time of year that is often supported by increased demand from the driving season in the US and air-conditioning demand. Chinese oil imports also fell by nearly 25% compared to the previous month; this apparent decrease in demand leaves the global market even more oversupplied. Furthermore, while US drilling activity is expect to decline, the impact is likely to be reduced by productivity increases, suggesting any reductions in US crude production may be small. OPEC’s decision to leave production at its recent levels and comments from Saudi Arabia indicating it would increase production if global demand were to rise, take on an added significance, tilting the balance to oversupply again by early 2016.

Whats’s the Outlook?
Temperatures are forecasted to rise next month, which may increase the demand for cooling, but this is expected to be offset by the consequential rise in solar generation. Higher gas generation volumes may also be required if wind power production falls as is often the case during hot weather. Perhaps the story next month will be carbon related as the EU parliament is expected to allow authorities to reduce the supply of carbon certificates in the market, in an attempt to solve the on-going oversupply. Finally, with market sentiment currently non-committal, forward curves for rolling-annual prices should be watched for any movement to suggest changes that might impact procurement strategy.

Greek referendum UPDATE:
Between writing and publishing the report, the Greek referendum result was announced as a resounding ‘NO’, i.e. the Greek voter did not accept the terms of the Eurozone’s proposed terms. As suggested in the report the £/€ initially gapped up on the result and then as analysts considered the likelihood of a resolution, either a new weaker proposal from the Eurozone, especially following the resignation of the Greek finance minister, or perhaps a Greek exit from Eurozone, the € started to strengthen. The reaction of the stockmarket, the main focus of the mainstream media, was of course entirely different!