July 2016 was a relatively stable month for prices, with UK energy tending to be slightly better supported during the first half, though prices for both UK power and gas generally ending the month at similar levels to where they started but with the forward curve perhaps slightly weaker by end month, i.e. the forward curves for the rolling annual prices showing a decrease in backwardation for power and an increase in contango for gas.

In contrast, global oil prices were noticeably weak, dropping 10-15% over the month, as the oversupply situation, experienced last year and at the start of this year, re-surfaced again as the summer US demand season progresses amid concerns that UK’s Brexit may lead to a global drop in demand.

However, it is worth recognising that UK gas prices held up surprisingly well compared to oil, implying the underlying fundamental situation for gas is relatively well balanced despite oil.

Gas:
Following last month’s price rise brought about by Brexit induced weaker £ FX rate moves, July 2016 was mainly impacted by fundamental influences. News that Rough Storage availability will be restricted over the winter added to winter supply concerns though the offsetting consequence, being that gas normally destined for storage will need to come to market, potentially decreasing prompt prices and increasing 1Q17 prices. We also saw some disruption to gas flows from Norway during July, though cynics might think this is more to do with avoiding prompt surpluses than technical issues.

Nevertheless, the forward curve for rolling annual prices verified the potential prompt oversupply by increasing its contango, indicating a possible price downturn in the near term, following oil and reversing some of the rises seen recently. However, it is also worth noting that since last month the longer dated forward curve shows hardly any change from last month and, perhaps surprising for some, even after recent price rises current forward UK gas prices are still significantly lower than this time last year. 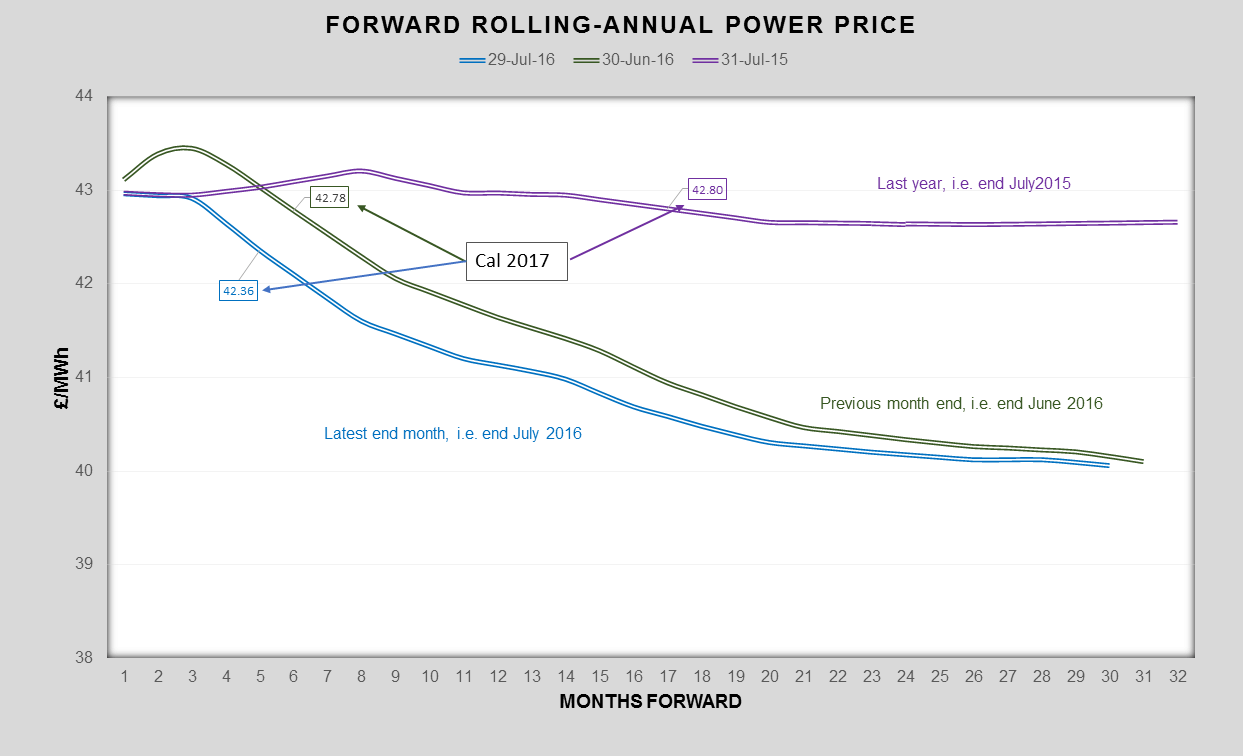 In a similar fashion to gas prices, UK power prices dropped more in the nearby months than for forward contracts, however, in contrast to gas, for the first time in many years, current power prices are trading at a similar level to forward prices last year. For example, this time last year cal2017 was trading at similar prices to those seen recently though longer dated prices are still trading well below levels traded last year; i.e. this means flexible contracts are still outperforming contracts fixed ahead of time last year, especially those fixed several years forward. Going forward however, the power backwardation, when considered together with the gas fundamentals, suggests buying some longer dated requirements while leaving nearby volumes may be the prudent approach; capturing some of the forward backwardation while leaving open the possibility to benefit from weaker oil and gas prices over the coming few months.

Oil:
Brent prices have continued the slide from last month, reflecting the current global oversupply. Whereas the oversupply was eased due to the usual US summer demand season, with the summer progressing normally and due to some nervousness that Brexit might trigger a drop in global demand, prices have declined further. Most analysts still expect some improvement in supply/demand fundamentals over the coming years, though without a strong demand growth this summer and autumn we may need to see lower oil prices again first. Nevertheless, we have seen some de-coupling of price between gas and oil so reasonable price drops in oil may not be commensurately reflected in UK gas and power prices.

What’s the outlook?
While Brexit still dominates discussion, with many wondering how it will impact on the UK energy market, in reality the medium to longer term impacts are likely to be less significant than some suggest – swings and roundabouts – remembering that energy is truly a global commodity. Much more important is the status of the UK’s gas storage facilities and the need for a stable supply of gas, whether that is from the North Sea/continental shelf, Europe or LNG cargoes; supply disruptions at times of expected demand and the performance of European storage facilities, in the absence of Rough, will be the main drivers of price volatility.