While prompt prices ended July 2015 at levels similar to where they started, within month spot prices have been quite volatile – due to mixed weather and adhoc maintenance issues impacting the gas system – whereas annual and forward energy prices in general have declined over the month, coming under downward pressure from declining oil prices.

Of note this month is that forward curves for the rolling-annual prices have lost their contango structure, to relatively flat for UK gas and to slightly backward for UK power, implying some signs of strengthening in sentiment.

Gas:
Annual gas prices for 2016 generally declined throughout July 2015, finishing the month about 2.5% lower. Spot prices, finished the month little changed though were much more volatile during the month; primarily due to continued adhoc disruption and maintenance issues impacting the gas system and very mixed weather throughout the month; record high temperatures being experienced as well as the wettest July day and coldest nights towards the end of the month. Nevertheless, Rough storage levels continued to grow in line with expectations. Despite some concerns that constraints on total storage levels could create supply problems and volatility during 1Q16, declining oil prices have helped depress forward gas prices. The forward curve for rolling-annual gas prices, lost their slight contango structure moving to a flat forward curve and signs of a developing backwardation are emerging again; indicating a possible slightly bullish change in market sentiment driven by potentially volatile winter prices as a consequence of tighter storage fundamentals. Such a price structure continues to indicate that a partial forward buying strategy still makes sense though as yet not a strong enough conviction to cover well forward in to winter. Watch this space though. 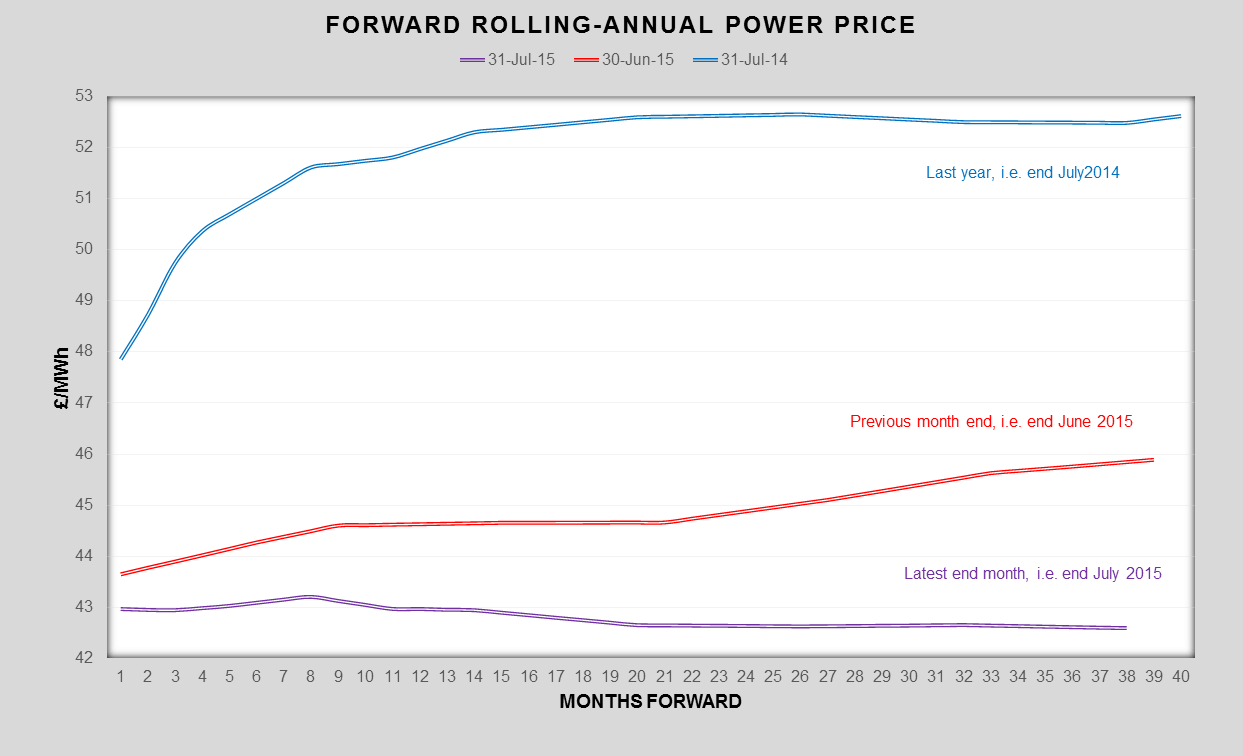 Power:
As with gas, the prompt power market showed some volatility within month but generally moved sideways. However, annual 2016 prices dropped just under 5%, which helped push the rolling annual forward curve in to backwardation for the first time in ages. Power output from renewable sources, solar and wind combined, have been relatively good again in July though the volatile nature of prompt gas prices unsettled the power prices somewhat. The slight backwardation in the forward curve for rolling-annual power prices is indicative of the market developing more conviction, probably bullish, while awaiting some shift in fundamentals and confirmation of a sentiment change in the market, which will be evidenced by steepening backwardation.

Oil:
Brent prices dropped $10/bbl during July 2015, which is approximately a 15% reduction. Physical oil market fundamentals remain weak especially when considering a gradual return of Iranian crude oil production; while this may occur later than some reports suggest, it will add to an already oversupplied crude oil market. Looking forward, Saudi Arabia did announce planned production cuts later this year though the oil market took little encouragement as these cuts will be commensurate with domestic demand reductions.  Furthermore, while some commentators still expect US oil production to fall over the rest of the year, drilling activity has showed signs of rebuilding again; if continued this would result in the resumption of month-on-month US supply growth starting in 2016.

Overall, oil prices continue to look fundamentally weak and a significant recover is not foreseen; this drop will have a price impact on long term gas contracts hence why forward gas and power prices dropped too.

What’s the Outlook?
As suggested last month, forward curves for rolling-annual prices should be watched for any movement to suggest changes that might impact procurement strategy. As other commentators are now noticing, we are seeing the beginnings of backwardation in the power market and if this develops in gas too, which while not certain looks likely, then the benefit of following Pulse’s strategy will be underlined – i.e. focusing on covering near term requirements and only partly covering forward, allows consumers to not only benefit from lower prompt prices when the market is dropping but also benefit from the reduction in forward prices before going in to winter, rather than fixing forward in the contango market earlier in the year.

Following the EU Parliament’s approval of a carbon stability mechanism to correct oversupply of emissions allowances, together with the expectation that additional EUA auction volumes will be cut by 50% during August, upwards pressure to carbon prices is to be anticipated, which may further impact power in the months to come.

Perhaps the story next month will be China related. The recent drop in the Chinese stock market has reminded analysts that the large footprint of Chinese demand may be a risk for some commodity and energy markets as growth decelerates down to 6.7% in 2016 from the sizzling growth rates of the 2000s. This combined with the risk to the thermal coal market as a result of China’s planned capacity increases in power transmission, not forgetting Obama’s new green agenda, will surely depress coal prices and maybe provide a knock-on impact to LNG and other energy prices.