Wholesale energy markets ended January 2018 approximately 5% lower though with some price volatility throughout the month. While there was some reasonably bullish news under-pinning both the gas and oil markets in January, this was out-weighed by a healthy UK system because of a good overall supply position.

Movements in the structure of the forward curves for the rolling annual prices were slight, changing little throughout the curve, though maintaining the flat element at the prompt end of the curve indicating a potential reduction in backwardation and possible sentiment change.

The second week of February is historically the coldest of the year so watching how the market acts during the latter part of February could provide a useful indicator of things to come.

Another earthquake, this time of 3.4 magnitude on the Richter scale, hit Groningen. The Dutch gas producer that operates the large Groningen field, said it halted gas production from part of the field on the request of advice from the state supervision of mines (SSM). While this did impact market sentiment for a time, the general supply position for gas in UK and EU looks healthy and so markets continued to drop once the news was absorbed. However, as a further long-term production cut at the gas field becomes more likely, it is possible the full ramifications are not over yet.

Nevertheless, forward gas prices ended January 2018 just over 5% lower than at the start of the month, and prices have also moved lower than this time last year.

The difference in the forward curve for rolling annual prices is minimal except that the current curve is again showing signs of reduced backwardation, which might be implying a potential to revisit contango in the coming months – how the curve structure changes over the next couple of months will be a key indicator that should be watched. 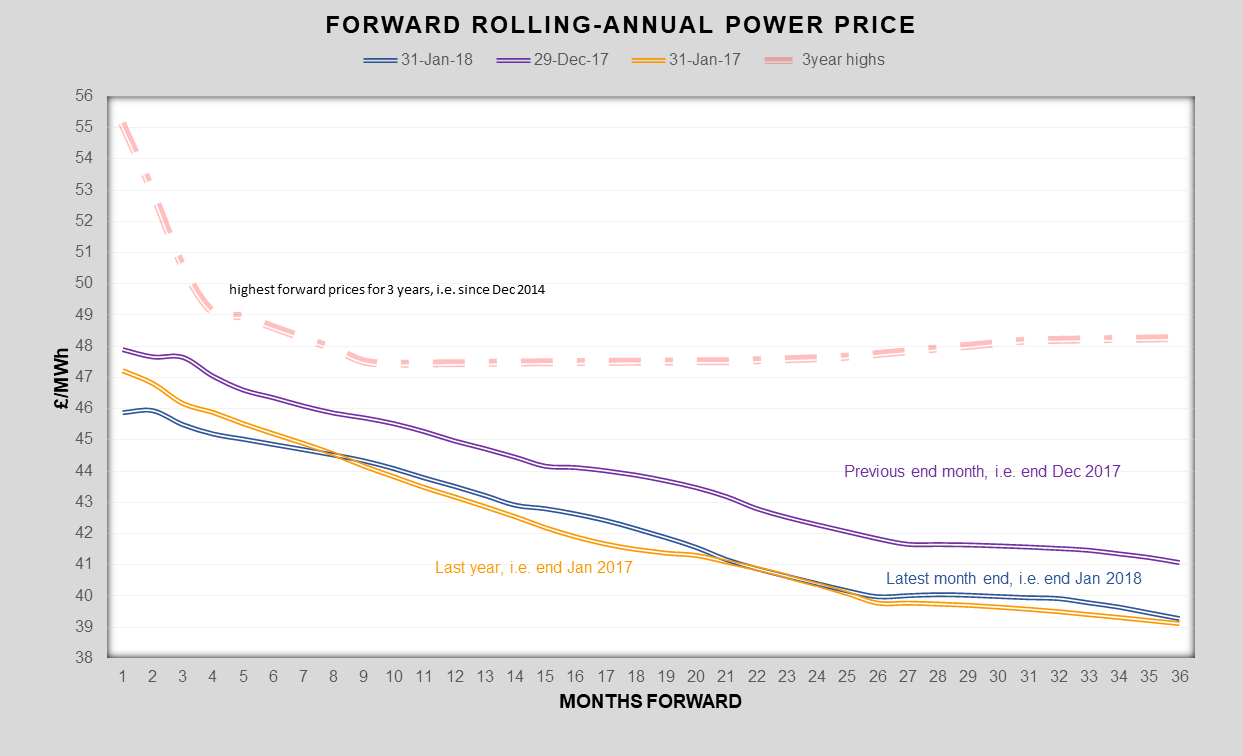 Historically, January can be a high-priced month, driven primarily by strong demand, relying on gas fuelled generation competing for supply with increased domestic (gas fired) heating. With increasing levels of intermittent generation, like wind and solar, this reliance on gas can often be further exaggerated; such renewable production can be unreliable on those very cold and crisp winter days with clear skies and low wind (i.e. high pressure). However, this year we have experienced fewer sunny winter days but more low-pressure weather fronts. As a result, even though temperatures on average might have been about normal, wind-power production performance has been relatively good for this time of year. On another note, sterling exchange rates have improved a little over January, which had the potential to add some upside volatility in prices. Nevertheless, over the month prices have dropped a bit with the good supply/demand fundamentals. The recent capacity auction results also support the impression of adequate market supply.

The forward curve for rolling annual prices is still showing some backwardation though this hasn’t changed much, further supporting a potential change in sentiment – as for gas this needs to be watched over coming months to provide a sense of the longer-term trend.

Oil has shown good support over recent months driven by many factors, not the least being instability in Venezuelan production and the ongoing resilience of the rest of OPEC to hold production levels. Some political tensions in Iran also helped buoy the market – Brent prices reaching 3-year highs ~$68/bbl. However, as the month went on prices appeared to stabilise as some well-regarded oil analysts appeared to be concerned that from end 1Q18 the supply position may be becoming over weight again. With the current high prices encouraging US production, any improvement in Venezuelan production, which did hold up by end January, helps provide a more than sufficient supply position. Many commentators now anticipate lower prices come 2Q18.

The 2nd week of February is usually the coldest week of the year and so if temperature forecasts remain we are likely to see the market hold some support until mid-February. Thereafter, as the temperatures warm up during the second half, current fundamentals could be enough to tip sentiment, provided we don’t see any new supply shocks. At this time, the focus should be looking for signs of developing contango, in which case trading opportunities would change from the current buying forward to achieve value from the backwardation to reverting to delayed buying to achieve benefit from the contango as prices ‘roll down’ the curve.