Wholesale energy markets ended January 2017 slightly lower though were nevertheless reasonably volatile during the month, with prices generally moving in line with temperature variations and forecasts; the weather in the UK continues to flit between bitterly cold spells and milder above average temperature, whereas mainland Europe has been experiencing some very cold temperatures throughout January 2017. UK energy prices were also impacted by further uncertainty surrounding the instability of Rough gas storage.

Movements in the forward curves for the rolling annual prices were slight, changing little over the month, maintaining backwardation and a general bullish sentiment.

With the market being so weather sensitive currently, revisions in forecasts will create opportunities to buy.

Forward gas prices ended January 2017 slightly lower than the start of the month, though prices are about 50% higher than this time last year. The difference in the forward curve for rolling annual prices is also evident with the current curve showing a bullish backwardation in comparison to last year’s contango forward structure. The implication here is that gas prices can still gain further, supported by further changes to colder weather forecasts and continued reduced supply from Rough storage – exactly at the time of year when supplies from storage are usually required to balance the market. Nevertheless, as price volatility is likely to remain during February 2017, this may result in price dips as well as spikes, especially as forecasts start looking further forward. A key element to watch is when the weather turns; if cold weather looks to persist well into to spring, prices may remain strong, however, if milder spring temperatures come earlier than usual then we may experience a significant dip; presenting renewed buying opportunities, particularly for forward delivery dates. 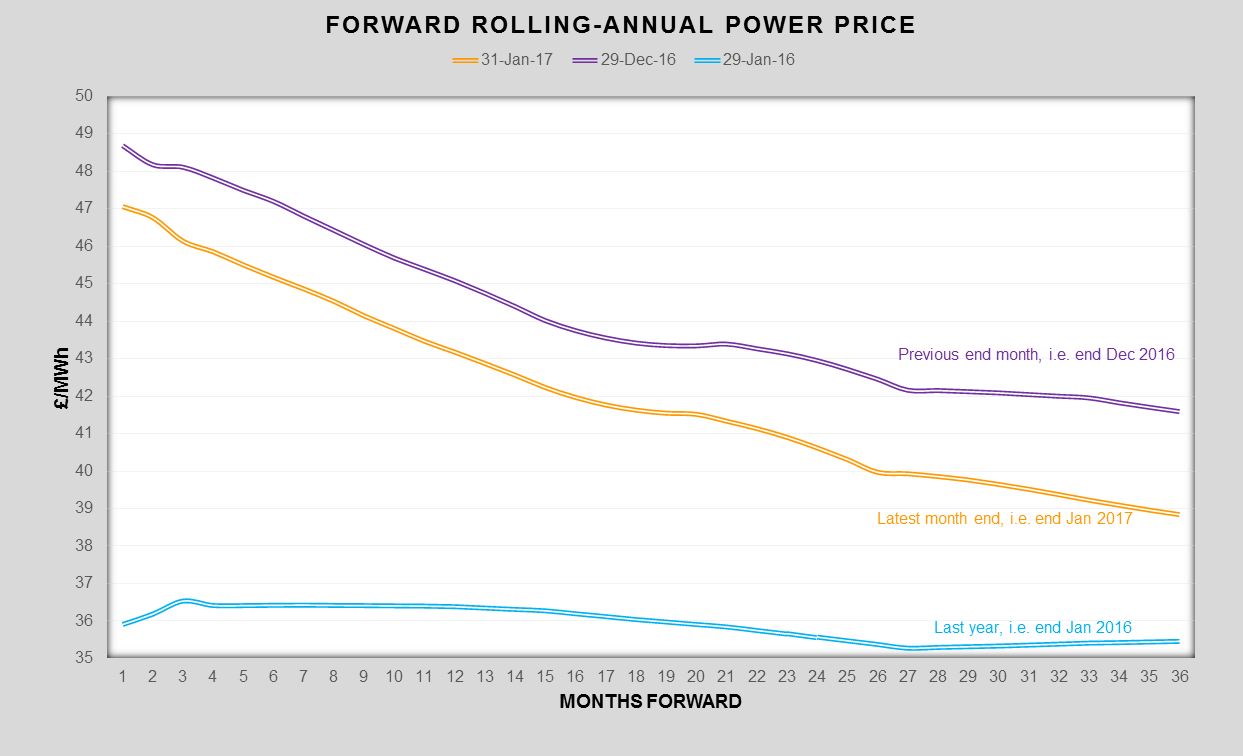 As we have seen in recent months, power prices have been increasingly correlated to gas, which during January have been primarily weather related, both in terms of shifting temperature forecasts and ups and downs in wind generation. We have also seen an increased impact from stronger coal prices of late as coal fired generation, particularly in Europe, has increased to meet demand. Sterling exchange rates, mostly related to Brexit issues, also added to volatility in prices. Nevertheless, over the month prices have dropped a bit, though have maintained their strong forward curve structure – a striking difference to 12 months ago, when prices were 30% lower. Accordingly, it is likely that the recent trend of generally increasing prices, will continue though we anticipate some buying opportunities will present themselves from time to time.

Oil:
In general, Brent crude oil prices have also been slightly weaker during January 2017, primarily on the lack of any constructive developments relating to OPEC supply issues and cooperation with some non-OPEC producers; if anything, the market seems to be bracing itself for negative news that might put a cap on prices for the near term. Furthermore, while the oil market is preoccupied with measuring the extent of OPEC member country compliance or non-compliance, there is now analyst concern that industry models relied upon to estimate domestic US production may have been misleading, which threatens to alter previous US inventory projections for 2017; domestic US production may have been bigger than thought!

What’s the Outlook?
The 2nd week of February is usually the coldest week of the year and so if temperature forecasts remain steady we are likely to see the market hold some support. However, if there are any revisions showing improved weather forecasts towards the end of February or extending in to March, we could see a dip in prices. Other factors to watch over the coming months are movements in the sterling exchange rate, particularly £/€; strengthening of which will likely reduce the demand pull for gas and electricity from the UK to the EU. Other macro signals to watch for, especially if they can impact energy supply, include developments in Venezuela, Russia, Turkey and China; factors like Chinese property prices, Chinese glass prices, Chinese property sales and Chinese steel prices often become a focus as we move into the new Chinese year, this time the year of the rooster.

Lastly, in this new political era of populism and protectionism, trade policies have the potential to disrupt global supply, which is probably more likely to create a ‘black-swan’ event then changes in demand.