Wholesale energy markets in the UK continued their uncertain feel during February 2017, though ultimately prices finished the month pretty much where they started or perhaps slightly lower.
Whereas the gas and power forward curves for the rolling annual prices dropped slightly across the curve, maintaining their primarily power led backwardation, some weakening in sentiment has been observed both technically and fundamentally. However, with oil moving in to backwardation for the first time in several years any hope for a sustained drop in prices may be premature. 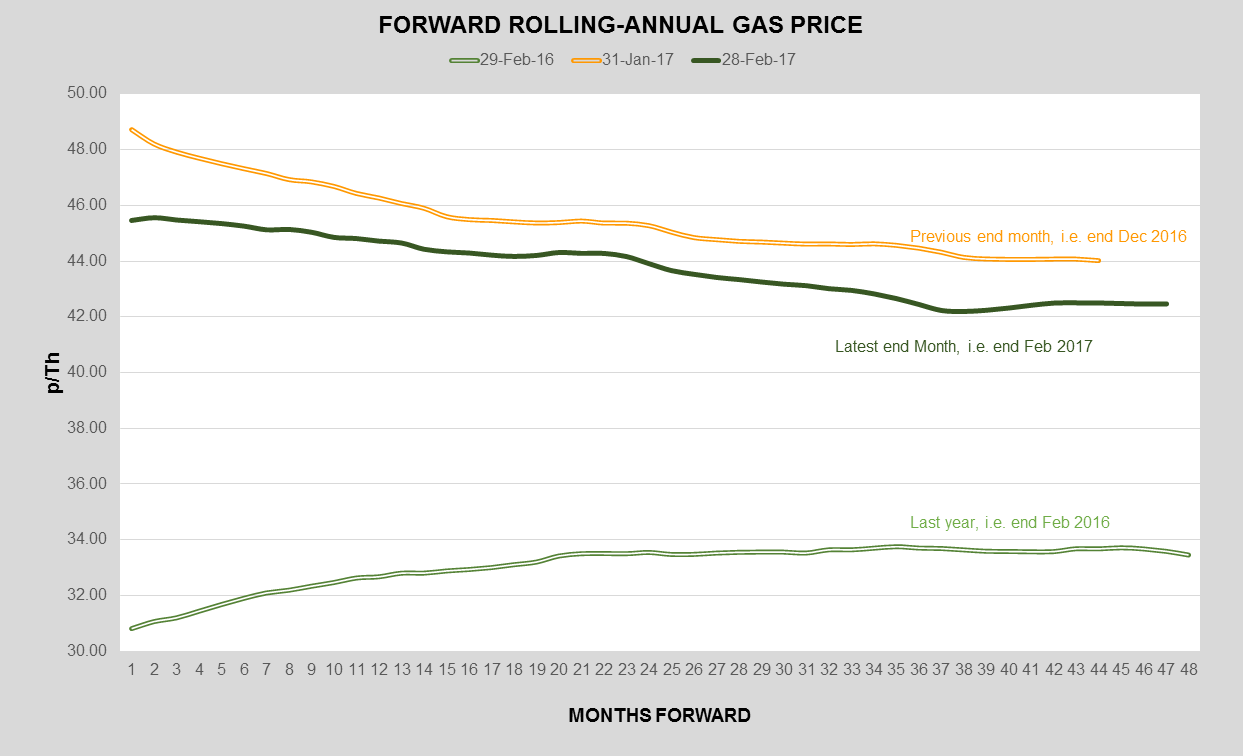 Forward gas prices ended February 2017 at slightly lower levels compared to the beginning of the month, with the entire curve dropping a few percentage points. However, prices are well over the levels seen this time last year due to much improved fundamentals, driven partly by reduced supply/demand ratios for crude oil. Temperatures throughout February were mixed, with periods both above and below seasonal norms, and as we progress in to Spring, having left the historically coldest days of the year behind us, most current forecasts are indicating a warmer than usual 1H March. Nevertheless, we anticipate variable weather conditions will continue, as we have seen for most of the winter, adding price volatility in what is, in reality, a fundamentally benign market; perhaps with the exception of continued uncertainty surrounding the on-going performance of Rough.

This month power prices essentially followed the weather forecast-led gas market, with prices slightly lower by the end of the month. The additional volatility that was seen in power was partly due to renewable (wind) generation, showing some instability due to the changing weather conditions.

The power market has maintained its strong backwardation, with all forward prices significantly higher than last year – such backwardation should encourage consumers to buy in some forward years though perhaps not all; as with gas we are seeing some short to medium term weakness, stalling the general upward trend, providing the opportunity to look for dips as opportunities to buy partial cover.

While Brent prices also dropped a little this month, despite some positive economic signals from China and evidence that OPEC’s production levels are holding, backwardation is returning to the forward oil market for the first time since September 2014. This structural change in the market reflects a re-balancing oil market and is consistent with an anticipated 10-15% appreciation in oil prices over the next year. Analysts now believe oil fundamentals remain supportive of a drawdown in OECD commercial crude oil inventory during 2017. Although oil stocks will still be above the 2010-14 average in days of consumption even by the end of the year, the significant progress towards normalised stocks, in combination with rising United States onshore production, will probably be enough to justify a termination of the OPEC (and non-OPEC, if still in force) supply agreement by end-2017.

Over the past year, every time the market has paused for breath, most advisers have piled in saying it is a good time to buy. While this was true from the middle of last year, it was not true for the first few months of 2016; last year’s price movement (we are obviously at higher levels) may be as good a prediction as any – even now, unless there is some major new development the sensible strategy may not be to rush it. As things currently stand, while backwardation is maintained, there are also some signs of fatigue in the market, this should be treated as a sign of short term weakness in an underlying longer term bullish cycle; prices can still drop further before we see the end of this extended dip, with the main question now being how to identify the end of the dip.