Wholesale energy markets continued their uncertain feel during February 2016, though ultimately prices finished the month pretty much where they started; oil was perhaps a fraction higher though gas and power prices were a little lower.

Whereas the gas forward curve for the rolling annual price dropped slightly across the curve, maintaining its oil led contango, the power curve started moving into backwardation again. This maintains the recent theme of over supply for hydro-carbons but indicates a stronger supply/demand balance for power. 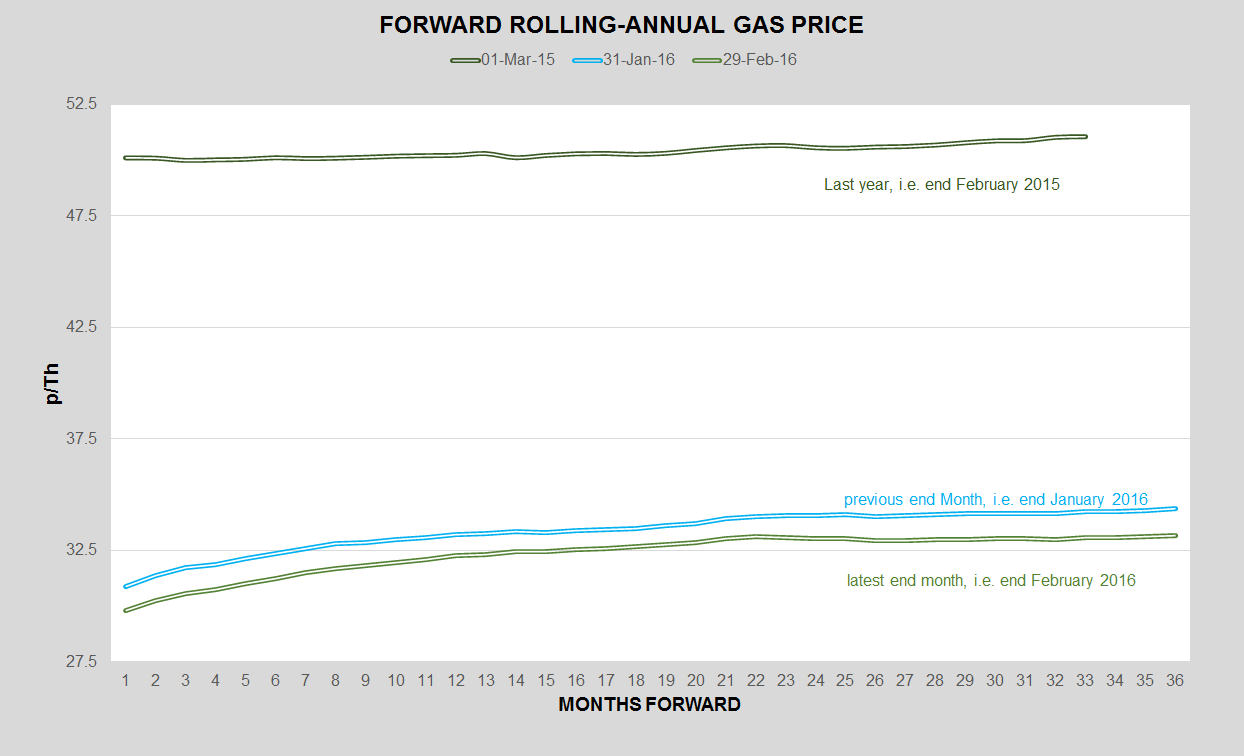 Forward gas prices ended February 2016 at only slightly lower levels to the beginning of the month, with the entire curve dropping just 1p/Th, though market movements throughout the month were more than this. Bearing in mind temperatures were slightly below seasonal norms for much of the month, this evidences an over supplied market, which has been looking to the oil market for rumour and hope to encourage prices. However, while little support came from global markets, the lower February temperatures and early March forecasts of colder weather, delaying the start of Spring a bit, will give the gas market some respite; enabling further draws from gas storage ahead of the usual buildup of inventory that starts in Spring. This could potentially provide some short term price support in the coming weeks, especially if Spring is delayed significantly – we are entering an interesting period as an extended delay to Spring can fundamentally impact the supply position.

As things currently stand though, this shouldn’t be taken as a sign of a bullish gas market but more that supply/demand is now more aligned; forward curves are still tending to contango and there is no shortage of gas. Gas prices, while seeming low, can still drop further and may well be driven by political issues more than fundamentals over the coming weeks and months. The supply/demand situation for oil is still a key element to watch.

Power:
This month, power prices appeared to be impacted by movements in carbon as much as other markets, which helped push down forward prices allowing the forward curves for rolling annual prices to move into backwardation again. What volatility there was in power was partly due to renewable generation showing some instability due to the weather conditions. Possible changes to the Capacity Market also had some impact on the market. Altogether, this underlines the more balanced nature of supply/demand for power, further supporting the return to backwardation.

The tendency for the power market to keep reverting to backwardation is worth watching and while energy (even commodity) markets in general look to China for support, for the time being it may be prudent to look at price dips in power as opportunities to buy partial cover.

Oil:
Brent prices managed some semblance of stability this month, even increasing a small bit; any continued strong move has been held back though as concerns deepen about China, especially as many analysts are surprised that China has not benefited more from the lower energy prices. However, history tells us to be patient with China as such things will take time, in fact it is usual for the impact of low commodity prices to be delayed in the Far East in comparison to US and European markets. We are also now seeing more signs of sustainable production cuts in US oil and LNG production, which together will eventually get the market back in balance. A word of warning though is that the oil market is also still in contango, which means cheaper spot oil might end up in store only to extend the apparent over supply longer than might be expected.

What’s the Outlook?
Over the past year, every time the market has paused for breath, most advisers have piled in saying it is a good time to buy – even now, unless there is some major new development, the sensible strategy is not to rush it but capture some of the forward year backwardation, or better winter backwardation if it is possible to achieve.

China is an evolving story and we will most likely see recovery but in their timescales. However, it might be obvious to say but remember China is big; even now, most Western analysts still under estimate China’s impact and yet they also over analyse the detail in the data, where the errors are as big as many countries!

Finally, as highlighted last month, as a result of the seasonally colder than normal temperatures extending through February, and likely into early March, we didn’t see any significant downward move develop. Accordingly, the outlook for March is similar in that continued colder than seasonal normal conditions will be required to provide any upward momentum in prices. In which case, look back at last year, as it feels like a serious case of déjà vu – last year’s relative price movement (we are obviously at lower levels) may be as good a prediction as any.