Let me start by wishing a Happy New Year to all our readers.

Like last month, UK’s energy prices peaked in the middle of the month driven by short term temperature effects but ended December slightly lower month on month as end year supply was well matched to demand. However, year on year, it can be seen prices have ended 2018 higher than 2017, primarily as a knock-on consequence of the ‘beast from the east’ at the end of last winter.

The rolling-annual forward curves for both UK gas and power changed little over the month, though like last year the nearby portion (prompt end) of the forward curves show the first sign of possible future weakness. However, as a word of caution, we saw the same developing features last year, which encouraged the market to generally expect 2018 to bring lower prices, but as we all remember, as the 2018 winter extended well in to spring, before the exceptionally hot summer, the large majority of the market was  badly caught out – having said that, unlike last year, whatever the winter, the market will probably not be caught out in the same way again. 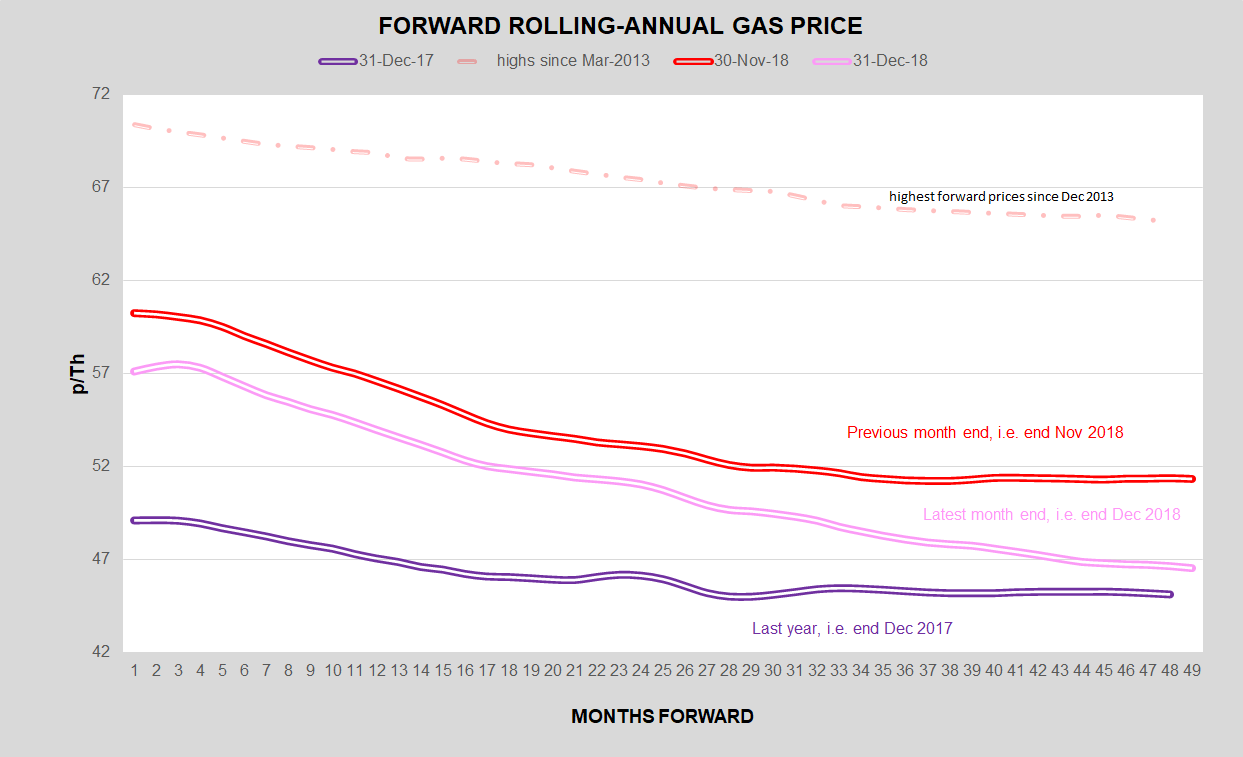 Following a milder than normal November, December 2018 continued this trend apart from a short cold spell in the middle of the month. Because of this, UK gas prices peaked at about 5% up on end-November prices in mid-December before dropping to end the month ~8% down.

The rolling annual forward curve for gas, changed little in structure, except the addition of a slight dip at the front end of the curve; this potentially indicates future weakening in sentiment over the coming period, which we will be watching.

With the generally milder temperatures and higher pressure, whereas heating demand for gas was subdued, wind levels were down and so additional gas was required for electricity generation. This has helped support gas prices somewhat and will continue to do so as we progress through January.

Power prices in December 2018 behaved similarly to gas, albeit were better supported because of the reduced wind-power generation and greater reliance on gas fuelled thermal generation. Consequently, whereas prices peaked mid-December they eventually closed the month with little change month-on-month.

Sentiment in the power market changed little, with the forward curve for rolling-annual prices maintaining its shape, albeit showing a very slight dip in the prompt, suggesting that any price fall is likely to be led by gas.

Wind-power generation is likely to pick up next week as temperature improve a bit, though towards the second half of January 2019 temperatures and wind-power production are again set to drop, possibly significantly.

As for gas, with the year-end rolling annual forward curves showing backwardation, forward years continue to look relatively good value, indicating that locking in some further forward years should still be beneficial. However, with signs that the market could turn after winter, it may be worth holding off purchases for Sum19 and Win19 for a while.

Brent prices have also been somewhat volatile with prices generally continuing their weaker trend; primarily due to weaker Chinese demand giving the jitters to the global finance market. Nevertheless, after three months of decline the market may be due some sort of correction, perhaps led by political/trade discussions between US and China plus any OPEC follow-up in managing production levels. However, further forward oil supply look sufficient, particularly if there is continuation of financial decline in China.

This time last year oil analysts saw prices moving lower before recovering on a more sustainable basis over the medium term – we have seen prices drop, so expectations now are for more stable levels during 2019.

Winter’s impact on prices is generally more a function of when the cold weather starts and finishes rather than how extreme the temperature and snow gets. This year, winter started late, and so far temperatures have been generally mild. While we have had a few cold spells in December, and forecasts suggest a cold (perhaps even very cold compared to normal) second half January 2019 and February 2019, unless the market is taken by surprise again by an extended winter, it is reasonable to assume any winter spike will be reasonably short lived. Accordingly, it would be sensible to ensure good coverage for any unsecured 1q19 demand, though for summer 19 and perhaps even winter 19 it is likely to be well worth waiting until nearer the time  to buy – utilising any flexibility available in supply contracts and not being ‘spooked’ by any short-term weather induced market spikes. While structurally* (i.e. the forward curve) this prognosis isn’t supported yet, both technically and fundamentally the signals are good.

Last year, the wholesale market was not prepared for the extended winter – the same thing is unlikely to happen this year, even if we get a repeat of the long cold winter, because the market will be more cautious. Of course, we still need to be mindful of Brexit related sterling (£/€) weakness, supporting UK’s energy prices, and any strong pick-up in the global financial markets though the impacts of these factors have been broadly assessed by analysts already.

If the predictions hold true, and especially if we see an early onset to Spring, buyers should watch for changes in sentiment during the period and if the market structure doesn’t look to be flipping towards contango, forward hedging can then be accelerated, particularly for power, so that the current backwardation can be taken advantage of.

NB: * The forward-curve, as a market structure/sentiment indictor, is good for trends and medium/long-term direction but, as a so-called lagging indicator, it is often late at predicting the precise top or bottom of a market.