Whereas spot/day-ahead prices remained volatile, during December 2016 energy prices in general moved higher though we did see a dip during the first half of the month. In fact, except for nearby power contracts, prices at the end of December 2016 reached contract highs for the year.

Also of note is a general shift from contango to backwardation over the year, which evidences a real change in underlying market structure from bearish to bullish during the year; even oil has moved from strong contango a year ago, to showing elements of backwardation.

Weather has not been a big factor during December 2016 though the variability and swings between mild and cold temperatures has been a feature expected to continue over the winter. Intermittent supply and storage issues also added volatility. 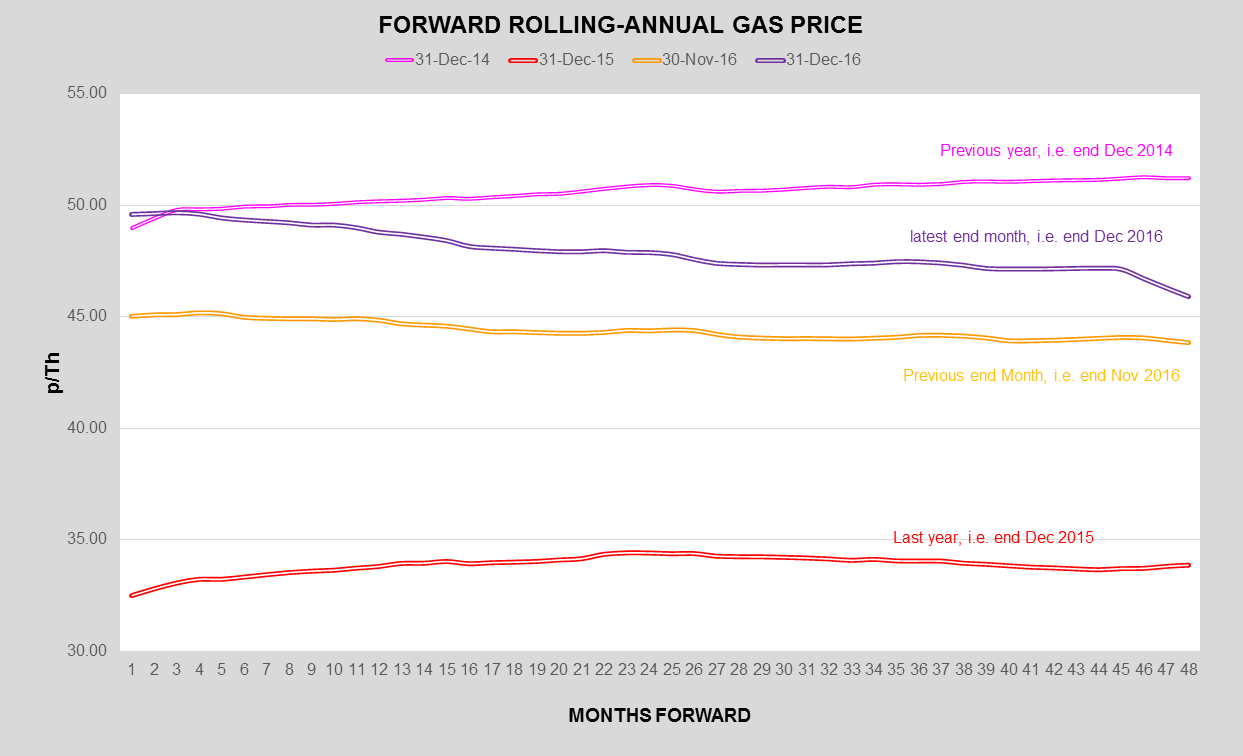 Prices moved up over December 2016, making new highs for the year, driven as much by oil and FX movements as various intermittent supply and storage disruptions. Consistent with these price moves, the rolling-annual forward gas market structure reverted to its gradual shift to backwardation – this shift over the year is shown in this month’s chart which also highlights the consequential firming in price during the year.

This month we have also included the market curve of two years ago. Interestingly, nearby prices at that time were not too different to this year. However, the curve structure is different; significantly the current curve suggests a stronger/bullish sentiment, whereas in December 2014 the structure was weaker and subsequently led to lower prices. Accordingly, we should continue to expect prices to trend higher over the coming months though of course this will not be without volatility, induced by possible supply disruptions and exaggerated by a tight storage availability and variable weather conditions.

Whereas winter related prices have not repeated the October/November highs, primarily related to French Nuclear supply concerns, during December 2016 UK power prices generally strengthened and the forward curve for rolling-annual prices maintained its backwardated structure. We can see from the chart how the forward curve structure and price have changed over the year; backwardation increasing as prices firmed up.

As for gas, in this month’s report we have included the December 2014 forward curve (for the then current rolling-annual UK power prices) for comparison purposes; this curve is markedly different to now, it being in contango ahead of a rather impressive drop in prices. Current price curves clearly demonstrate backwardation, a sure sign that the market is structurally strong, while providing the opportunity to purchase forward contracts at a significant discount. Of course, market uncertainty means picking the lowest prices with real confidence is essentially a matter of luck, so a prudent strategy might be, where possible, to buy some volume forward on dips in the market and avoid buying all volumes on the same day.

Crude oil prices ended December above $50 per barrel on the high of the year. The annual average Brent price ended the year $17/bbl up from the end of 2015, at $54/bbl, though the 2016 annual average of $44/bbl was $8 below the 2015 average. Despite robust demand for petroleum products, relatively high production and inventory levels provided downward price pressure on crude oil prices throughout most of 2016. However, recent agreements to curb production over the next six months within the Organization of the Petroleum Exporting Countries (OPEC) and additional pledges by some key non-OPEC producers put upward pressure on prices at the end of 2016 as markets appear to be anticipating tighter balances than previously forecast.

Analyst expectations for 2017 vary quite a bit in the $50-60/bbl range with most of the uncertainty around the success of the OPEC/non-OPEC production agreement, which is by no means certain. With the forward curves increasingly showing signs of backwardation a period of sustained upward momentum might be possible if the agreement holds.

Weather forecasts for the remaining winter currently suggest a drier than usual year with average temperatures only slightly milder than normal. However, most longer range predictions also include high variability with temperatures swinging up and down several times throughout the winter months, resulting in very cold periods (perhaps with some snow towards the end of January) followed by rather mild temperatures between. The potential for gas/power supply disruptions, gas storage constraints or other external influences (politic or otherwise) can’t be ignored either.

With all this in mind, prudent buying strategies would tend to lead to buying spread over an extended period to avoid the possibility of contracting on a high, while keeping average achieved prices on the lower side through forward buying, rather than front month related purchases as in previous years.