Wholesale energy markets were weak again over December 2015, making new lows for most contracts – in fact December finished the year with most commodity prices, not just energy, much lower than they started the year. Much of this drop in UK energy prices was a function of relatively mild temperatures, though the ‘warm’ air brought significant rainfall, which in other years may have fallen as snow and so significantly easing the devastating flooding in many parts of Northern England. Forward prices also continued to drop, though there was a slight upward blip at the end of the month. Oil prices continued their bearish trend.

The forward curves for the rolling annual prices lost some of their backwardation, particularly for gas, which reverted to a slight contango, indicating some market scepticism for any sustained up move. However, near term weather forecasts are looking more seasonally normal so some uptick would be a reasonable expectation. 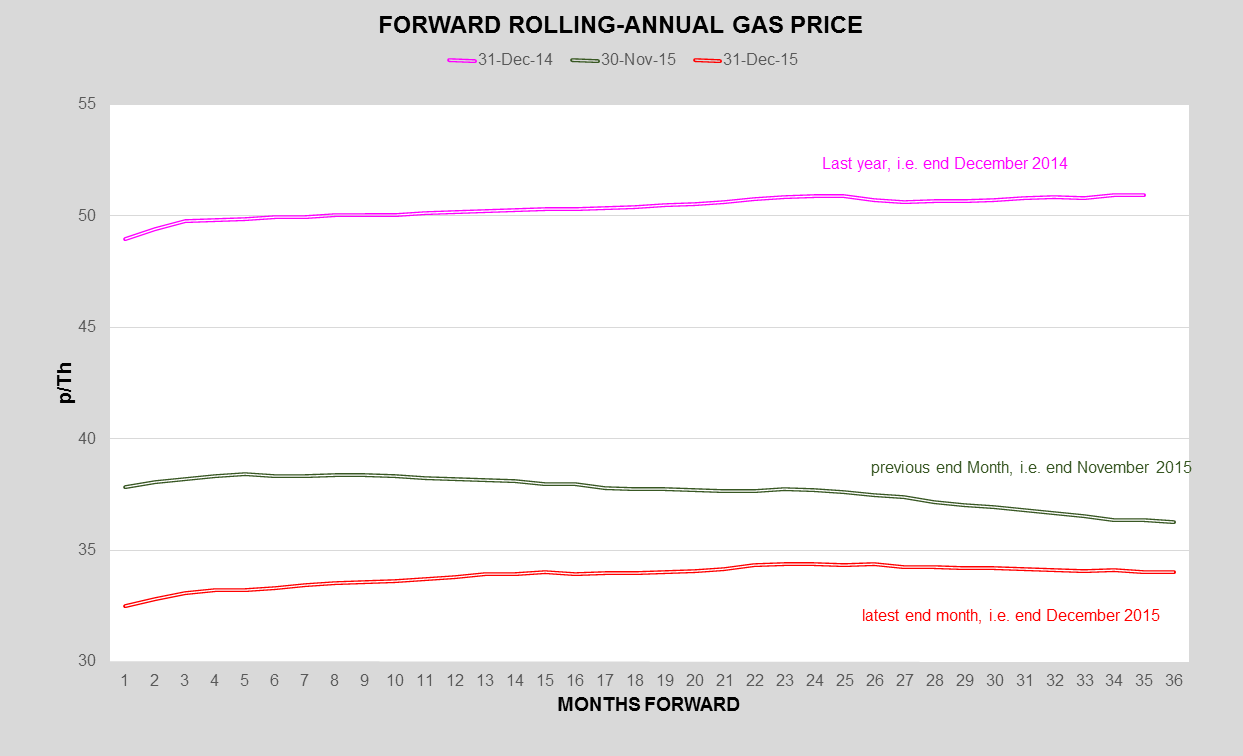 Gas prices continued their downward trend in December, this coincided with well above seasonal norm temperatures and further weakness in oil. Prices again made new contract lows and only at the very end of the month was there any sign of recovery in forward markets, albeit small. Gas storage levels improved in December, adding to the good overall fundamental supply position, despite some restrictions in Rough storage availability this year.

Having seen a shift in the forward curve structure last month to backwardation, it again reverted back to a slight contango. Such lack of conviction in market direction is disappointing and suggests we may see some volatility over the coming weeks as sentiment shifts back and forth, probably on exaggerated responses to any news that could have a fundamental impact. While we may have seen the lows for now, and market increases are predicted by many TPIs, it is quite likely that any increase in gas price will be short lived, perhaps only really affecting the prompt winter months as colder weather finally arrives later in January. However, while a cautious purchase strategy is the sensible approach, if the gas market does revert again to backwardation buying some forward volumes might be prudent.

Power:
Much like other energy markets, power prices were weak throughout December, ending the year on lows with the only fundamental support coming from relatively low wind-power generation compared to recent months; this being more than offset by lower demand, albeit there was a second Triad warning in the middle of December. While backwardation was still just about evident in the forward curve for rolling-annual prices, such backwardation was much less obvious reflecting a softening and reduced conviction in market sentiment as the month went on; perhaps we are seeing another ‘false bottom’ to the market. Profit takers, closing shorts before year end, provided what little market support there was; the shift to a longer term purchase strategy being delayed somewhat though it is probably still prudent to capture some of the backwardation over the coming weeks if possible.

Oil:
Brent prices also continued their relentless drop, breaking through the supposed psychological support level of $40/bbl and now targeting below $35/bbl, a price not seen since 2004; this was despite some escalation in tensions between Iran and Saudi Arabia. The US also allowed the export of crude oil, lifting a 40 year restriction, which might support US prices but is only shifting the supply overhang elsewhere. Some market commentators are now saying the end is in sight for the ‘vicious commodity – currency downward spiral’ and that 2016 will bring a flurry of corporate activity including bankruptcies, raising of equity capital, asset sales and M&A, all signs that the commodity cycle is getting closer to finding a floor. However, in the short to medium term oil and global commodity prices in general, still look precarious, particularly if Chinese growth only continues at the lower end of expectations.

What’s the Outlook?
Last month we said the smart money is on a few months of stronger prices, followed by a return to contango after a cold January and February – this is still a reasonable stance as long as the weather forecast is correct.

Over the medium term, the development of backwardation in the rolling-annual forward curves remains the indicator to study for purchasers looking to trigger longer term purchases. However, as we have experienced over the past few years, without a sustained shift to backwardation the most successful strategy will probably be to continue delaying buying decisions as late as risk appetite can accommodate, only buying forward as and when there is backwardation.

Other features to watch out for are the possible consequences coming from the recent Paris climate agreement signed on Dec. 12, 2015. Each country pledged to lower greenhouse gas emissions in what could mark a turning point in the global effort to slow climate change. The deal recognised the role of incentives in reducing emissions, including carbon pricing. Currently, about 40 countries and 23 cities, states, and regions are using a carbon price – their outputs represent only 12% of annual greenhouse-gas emissions. As part of the Paris deal, more than 90 developed and developing countries have included carbon-pricing schemes among the actions they intend to take.