During August 2018 UK energy prices increased relentlessly, they were up by 10%, with forward curves for rolling annual prices also increasing their backwardation further; structurally supporting the market strength. Notably, CO2 prices also increased significantly, demonstrating that gas demand, particularly for power generation, has been a primary influence on recent price moves. Oil prices and £/€ exchange rates also played their part, and fluctuations in gas supply were more keenly felt in the market than normal.

In effect, we are still experiencing the consequences of the ‘beast from east’; the subsequent historically hot summer extending its influence. 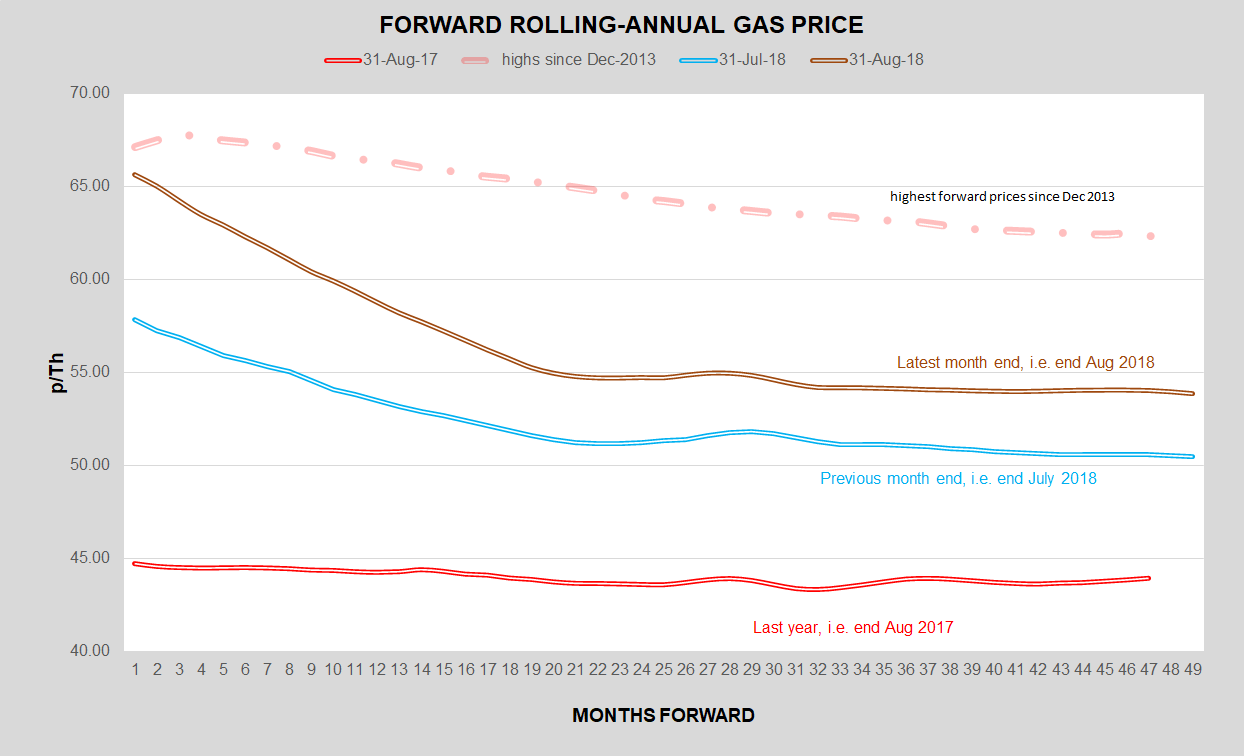 UK Gas, was the main driver pushing UK energy prices this month, aided and abetted by the extreme summer. Even though August was not as hot as earlier in the summer, demand for gas was good both for gas-fuelled electricity generation and to make up shortfalls in storage – we still have not fully recovered from the impacts of the ‘beast from the east’ in terms of filling gas storage and with a higher than expected need for gas-fuelled generation, a constantly strong demand for gas needs to be ensured. Several interruptions to supply didn’t help the balance either. Weak, Brexit related, £/€ exchange rates also gave impetus to European demand, further encouraging prices.

The forward curve for rolling annual gas prices showed increased backwardation, demonstrating the market remains structurally strong for the time being – the last time we saw annual gas price this high was Winter 2013/14.

Annual UK power prices broke through recent past highs this month, reaching levels not seen since the early stages of the financial crash in 2008, though electricity prices are still well below all-time highs reached earlier in 2008. Despite record high levels of solar electricity production, in truth still not that significant, wind power production has generally been quite disappointing, due to our summer weather being dominated by high pressure and little wind. With power demand higher than usual, thermal/gas generation was still very much in demand, supported by high spark spreads – strong prices for CO2 provided good evidence of this demand.

Unfortunately, one of the consequences of UK’s increased reliance on intermittent renewable generation will be higher prices in extreme weather and demand situations – at least until the UK’s wholesale trading arrangements and transmission/distribution networks become better suited to our changing market dynamics.

Oil prices jumped around a bit during the first half of August 2018 and then increased as the month progressed, ending the month about 8% up. Fundamentally, the oil market has changed recently with US production holding steady, Russia and OPEC managing their supply in a controlled fashion and the US imposing sanctions more aggressively; also, one or two OPEC producers are potentially at risk of failing. While analysts generally expect prices to rise in the short term, medium term expectations are of a supply glut, however, geopolitical factors and potential supply disruptions are risks that could inflate prices.

Most market signals continue to be bullish and any hint of a sentiment change last month has disappeared. UK energy prices are being driven by gas demand, which still looks good, being supported by storage needs and Brexit inspired sterling weakness. As long as the market maintains strong fundamentals and a strong structure (i.e. backwardation), the best consumers can do for now is look for dips and take advantage of the cheaper forward prices. However, the last phase of a bullish market usually coincides with an over excited/euphoric market, something to look out for; at which point strategy should be reviewed.

One key factor going forward will be what the expectations are for winter weather conditions. Many signs continue to point to a mild winter on average (i.e. bearish) though some indicate the potential for some early cold weather due to high pressure over the north polar regions and for the solar minimum to extend the winter well in to March again. With extreme weather conditions characterising 2018 so far, it is not inconceivable that the weather could provide another shock to prices this winter, which could be have a significant impact either way.