After several months of seeing the annual price move pretty much sideways, the market eventually moved up quite strongly, reflecting the structural strength demonstrated by the power market. Historically, August is normally a flat month so it was perhaps somewhat surprising to see UK energy prices rise >5% in August, taking prices back up to levels last seen during the past winter months.

Despite the pre-August summer being warmer than normal, temperatures through August were generally well down on seasonal norms, creating a surprising increase in heating demand – very unusual for summer months. This, combined with a relatively unstable gas supply system (several unplanned outages across the UK and Norwegian gas sectors) and a steadily weakening £/€ helped support prices. Additional concerns being raised about potential nuclear generation issues in France again this winter and a volatile oil market also added to price nervousness in UK.

As might be expected the firm sentiment helped support the markets structurally and we saw the forward curves for rolling annual gas prices turn backward for the first time in a while with power’s backwardation increased.

Annual gas prices moved up over August 2017 after several months of generally moving sideways. Whereas August is historically a low volatile month for annual prices, due to holidays and the general reduction in demand over the summer, however this year, seasonally low August temperatures after a very warm early summer, resulted in a surprising heating demand. This, coupled with a significant jump in unplanned outages and a further weakening on the pound (£), all conspired to push prices up.

Gas market sentiment also became more bullish as the forward curve for rolling annual prices moved in to backwardation again, implying the potential for a continued stronger trend in prices. For those who have been following our ‘buying dips’ strategy, Winter 17 and beyond should be well covered by now, however, for those still with winter 17 and summer 18 to buy it has just got a bit more difficult and the prudent decision is probably to accelerate purchasing. 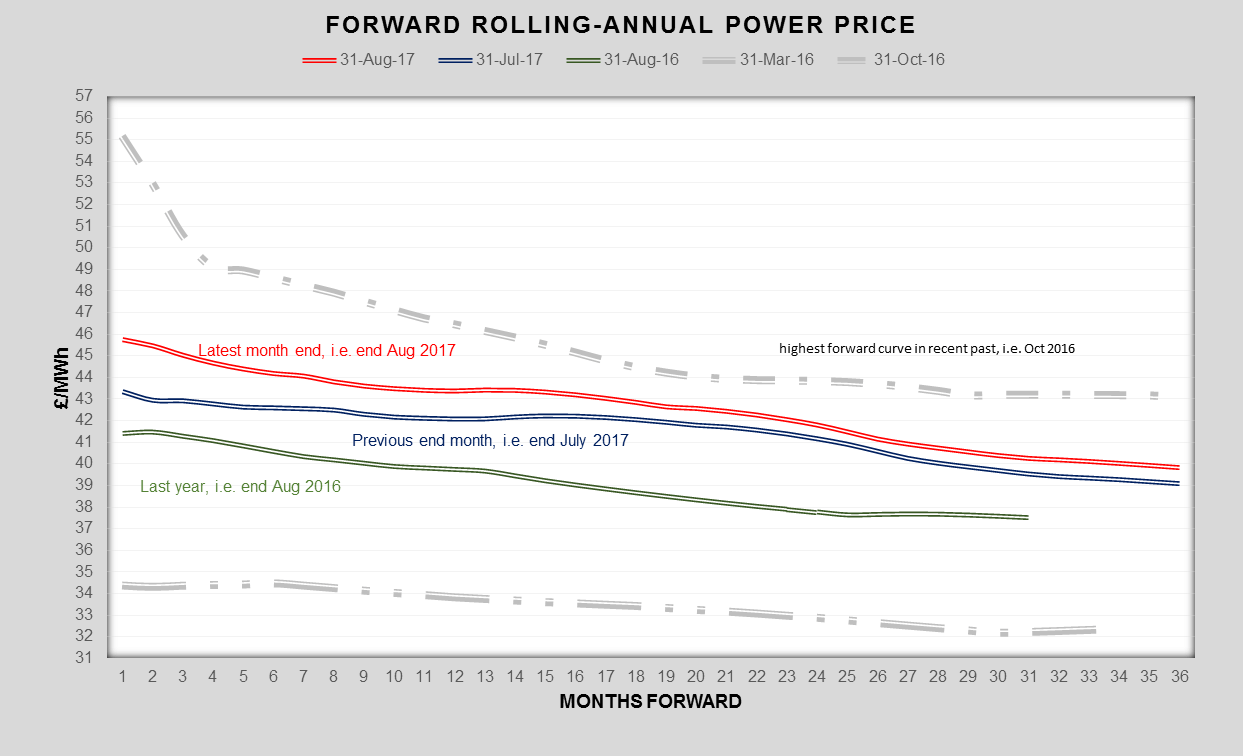 Movements in the electricity forward curve for rolling annual prices reflected that of gas, i.e. ~5% higher prices with increasing backwardation compared to last month. As well as the gas influence, electricity prices and volatility were also driven by renewed concerns about the state of the French nuclear generation for the coming winter.

As with gas, the market structure implies there is further potential for price rises before the year is out. The increase in backwardation continues to suggest a strong market sentiment and the opportunity for buyers to consider extending contracts with their existing provider with the aim to pick up some of this increased forward backwardation.

August 2017 was also a volatile month for oil, though Brent prices ended the month at similar levels to where they started. By the end of the month, uncertainty as to the consequences of Hurricane Harvey continues to leave the oil market unsettled. While not forgetting the damage and distress the hurricane has caused at a personal level for those in its wake, it has created a mixed response in the market, coming from a consequential loss of demand for crude oil (closed or damaged refineries) but counterbalanced by a shortage in availability for oil products like gasoline/petrol. US EIA/API inventory data levels will be providing confused signals for several weeks to come.

Notwithstanding global political issues (N. Korea tension etc..), the next few months will be important in setting the tone for winter – to date longer term weather forecasts suggest a rather unsettled, low pressure driven winter for the UK; so, it will probably be wet, albeit too early to say if it’ll be cold too – at this stage it might be reasonable to expect, at a minimum, a period of volatile prices.