During August 2016 we saw some variation in market movement across the energy sector; oil generally moving up over the month though did finish August on a weaker tone, whereas UK gas and power generally moved down, albeit forward delivery dates only dropped a few percent compared to 10% for the first nearby month and day-ahead gas prices dropping to its lowest level for many years. Perhaps this move for gas should not be a surprise bearing in mind the continued contango being shown in the forward curve for rolling annual prices. Fundamentally, the biggest news this month was some respite in the Rough storage situation, with some wells being made available sooner than expected.

As a consequence of the drop this month, all forward prices are again lower than they were this time last year despite power still showing structural strength. 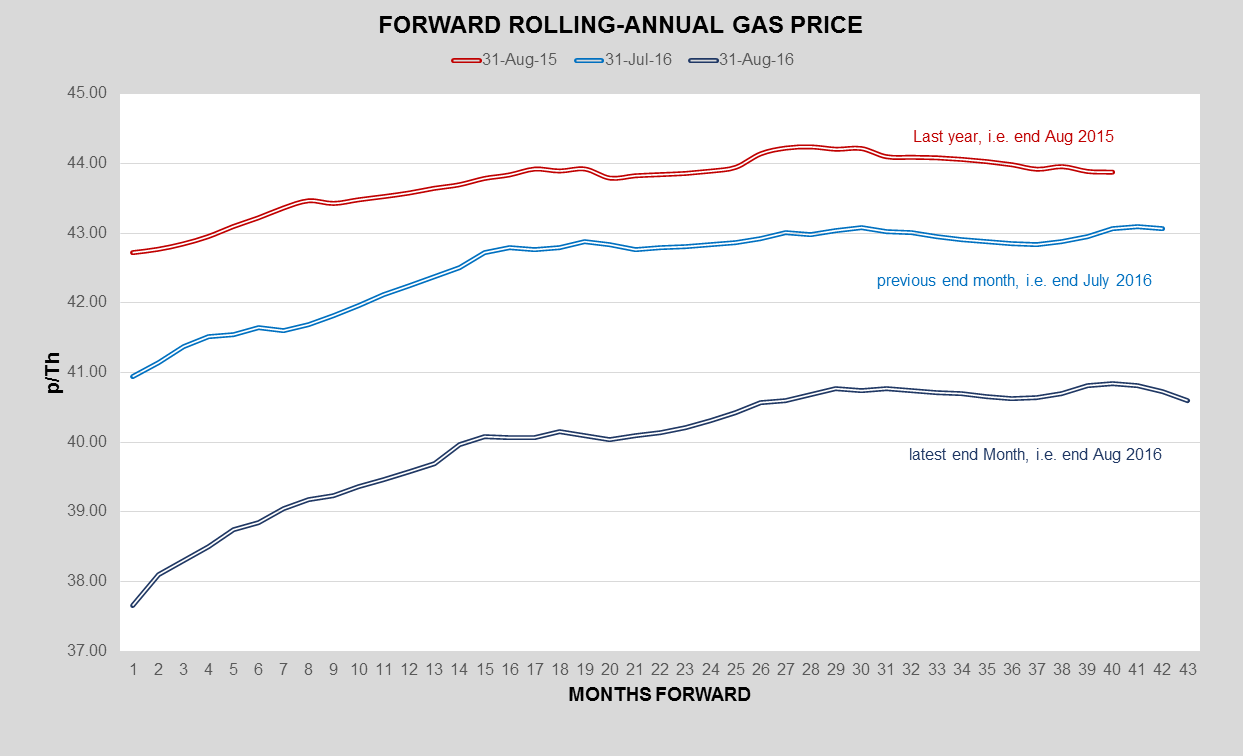 UK gas prices duly fell through August 2016, as suggested by the forward curve for rolling annual gas prices, with the structural weakness remaining and also reflecting the fundamental supply position. Centrica announced the availability of some wells in Rough from November, reducing concerns about a Winter16 supply restriction and so easing prices. Mild weather for now is also helping to keep prices down, especially prompt prices, which have recorded the lowest levels we have seen for about six years.

For the time being, we are likely to continue with the same market unless we see a surprising and marked turn in the weather or some fundamental disruption to supplies.

As has been the case for a couple of years now, current forward prices are still below the previous year’s; this continues to justify the decision of those on flexible pricing, despite the likely pressure to buy fixed, who will only have been beaten by buyers lucky enough to pick the bottom of the market.

Power:
UK power prices followed gas prices down, primarily because the lower gas prices increased the competitiveness of gas power generation plant, though the drop was slightly less than for gas. Nevertheless, UK power remains clearly backwardated suggesting there may be a greater response to bullish influences compared to gas and that buying forward may still be prudent.

However, following the drop, we again see forward prices trading lower than during the previous years.

Fundamental concerns still match the structural forward curve considerations, with debates over likely delays to Hinkley Point 3 only making concerns worse. However, the use of the Capacity Market auctions can ease the situation which will undoubtedly be used earlier and more frequently than initially envisaged.

Oil:
Oil prices generally firmed during the first half of August on more hope of a producer curtailment, though as usual the rumours led to little and oil prices drifted off during the 2H August, ending the month slightly up.

However, expectations going forward are mixed and some analysts believe a constructive oil market balance is emerging for Q4 16 and 2017, showing the first stock draws in several quarters. An even tighter balance than we forecast is possible too; at least one of the more reliable analysts is saying that the oil market is rebalancing, and warn of cherry-picked headline that fits the flavour of the day. On the bullish side, global petroleum stocks (ex-China crude) are building at half the rate they were last year and Venezuela’s problems look set to worsen in the short term. On the bearish side Saudi Arabia’s demand downturn means it is poised to raise exports in the months ahead. Most do not expect any supply freeze, especially as Iran remains some distance away from its pre-sanctions level, meaning producers will have difficulty agreeing to a freeze at the end of September; even if key producers freeze, it would not cap exports.

What’s the Outlook?
We should expect a reasonably rocky ride from oil over the coming months and this will influence UK gas and power to a certain degree, perhaps making any consistent trend unlikely – NB: September is often a bullish month coinciding with many buyers fixing their annual fuel prices ahead of the new gas year.

As September progresses it is that time of year to start looking at weather forecasts for the coming seasons and also to look out for signs of the first cold snap – this may seem a little premature, bearing in mind the warmer than normal weather currently, though this year with storage tighter than usual any signs of a supply restriction could create some market nervousness leading to a possible spiking in prices.