Whereas August 2015 was not the summer month we hoped for in terms of warm sunshine and good weather, the UK energy market was typically unexciting for a UK summer holiday season. While gas and power prices did show some volatility during the month, prices finished at similar levels to where they started the month, with power very slightly higher and gas lower. Oil prices were significantly more volatile, moving in a 20% range, though eventually finished the month lower and continuing to look under pressure from concerns related to Chinese demand and due to the potential for increased global supply.

Forward curves for the rolling-annual prices have remained largely unchanged this month, maintaining a relatively flat structure, implying little change in sentiment, though annual prices have dropped slightly (1-2%) for both UK gas and UK power. 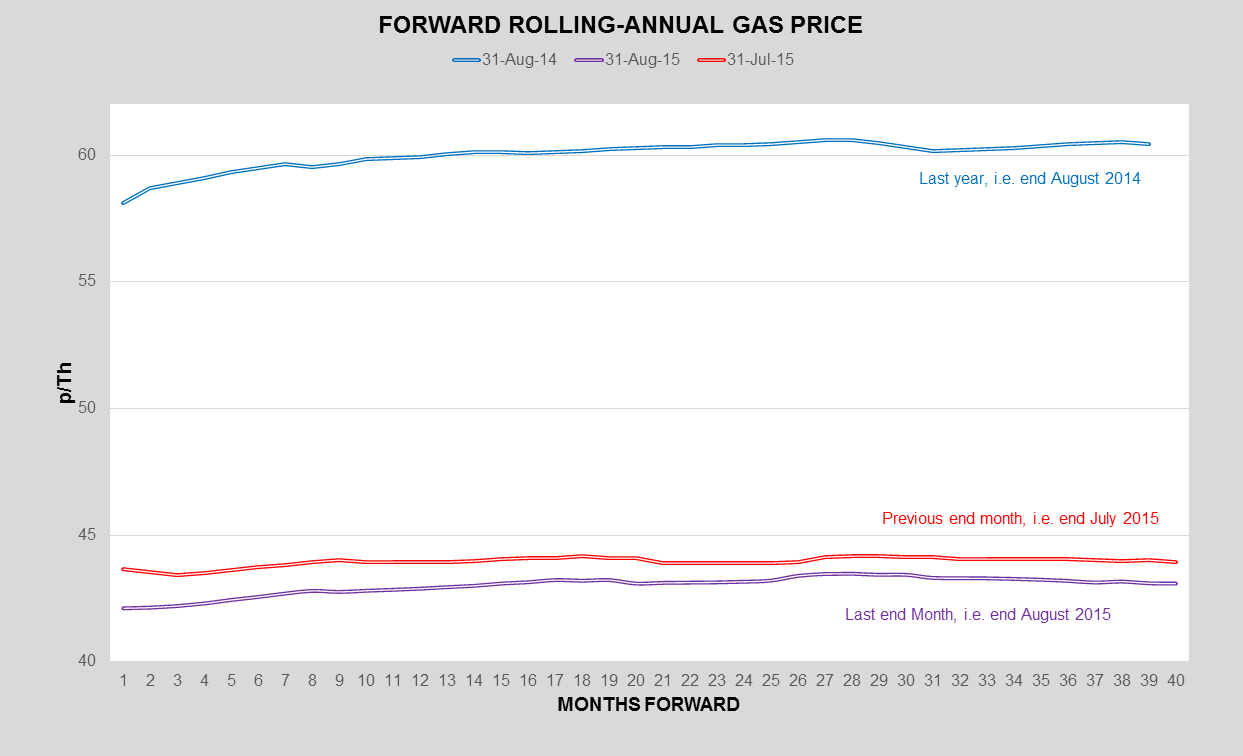 Gas:
Spot prices finished the month a little lower, having steadily drifted down during the month with a pick-up right at the close of the month due to increased demand for storage injection ahead of planned restrictions coupled with a slight pick-up in oil prices (following a run of oil price weakness). Annual gas prices for 2016 declined slightly over August 2015, finishing the month about 2% lower. August temperatures were in-line with seasonal norms, although rain levels varied depending on location. Nevertheless, Rough storage volumes continued to grow, ahead of expectations, in anticipation of constraints during winter. The forward curve for rolling-annual gas prices moved down slightly though the forward structure was little changed; indicating little change in sentiment and no strong view in market direction from here – assuming a seasonal normal winter and no other fundamental changes impacting supply and demand. Such a price structure continues to indicate that a partial forward buying strategy remains a prudent approach and as before not yet a strong enough conviction to cover well forward into winter. Nevertheless, we must be watchful for changes, which could turn rapidly as we progress through autumn to ‘clock change’.

Power:
As has been the case recently, the prompt power market showed some volatility within month though generally moving slightly down. Annual 2016 prices generally moved sideways, dropping only about 1%. This volatility and drop in price can be partly attributed to renewable generation levels, which were generally good again this month, albeit a bit up and down like the weather; this resulted in less reliance on thermal (gas and coal) generation and so the consequence of the stronger CO2 prices predicted last month will not have an impact until coal fired generation rates pick up later in the year. The rolling annual forward curve changed little month on month. This stability in the forward curve for rolling-annual power prices is indicative of the market waiting some shift in fundamentals before confirmation of a sentiment change in the market. Accordingly, the buying strategy for power should remain consistent with that mentioned for gas above.

Oil:
Brent prices dropped again in August 2015, though whereas the drop was less significant than last month the price swings were greater. Physical oil market fundamentals continue to drive a weak market sentiment and a significant recovery is not foreseen unless a more stable growth cycle returns to far eastern demand; currently unsettled by Chinese market wobbles. Perhaps more encouraging news for the oil market is that the WTI 2016 curve is now low enough to reduce the attractiveness for new investment in US wells, implying a greater likelihood of continued supply discipline on a 1-year time horizon if prices remain at the current level.

What’s the Outlook?
As anticipated last month, China created the most excitement in the market with stock index moves making all other markets appear boring. While the China story is yet to play out fully, it needs to be put into some perspective in that the Shanghai Composite Index is still 25% higher than 1 year ago and the big fall experienced recently may not be considered that surprising when bearing in mind the meteoric rise during first half of 2015, which saw stock prices almost double in value – most markets experience volatility and often the bigger the rise the bigger the fall. Perhaps the moral of the story is that bad things usually come from manipulation and this time the culprit appears to be state sponsored rather than a rogue trader.

With the forward curves for rolling-annual prices holding their flat forward structure, UK energy markets should be vigilantly watched for any movement to suggest changes that might impact procurement strategy; e.g. steepening backwardation (i.e. nearby prices higher than forward prices) suggests the market is turning bullish and forward buying should be accelerated or if we see a return to contango (i.e. where the forward price curve shows higher annual prices in forward years compared to the front year) this suggests the market is becoming bearish again and buying should re-focus on covering near term requirements.