Energy prices were volatile throughout April 2018 and maintained their bullish trend, with only brief respites. UK’s wholesale power prices increased by 6-8% and UK gas prices moved up nearer 10%. Oil prices moved up even more providing general underlying support to the sentiment.

Backwardation in the forward curve for rolling annual prices increased further, indicating the apparent weakening of sentiment experienced during early winter was over and that prices would probably trend higher again before there is any significant reversal. In fact, price moves since mid-February have been as strong as we have see for many years.

At this time, we should be back in ‘buy the dips’ mode rather than holding back and waiting for lower prices. 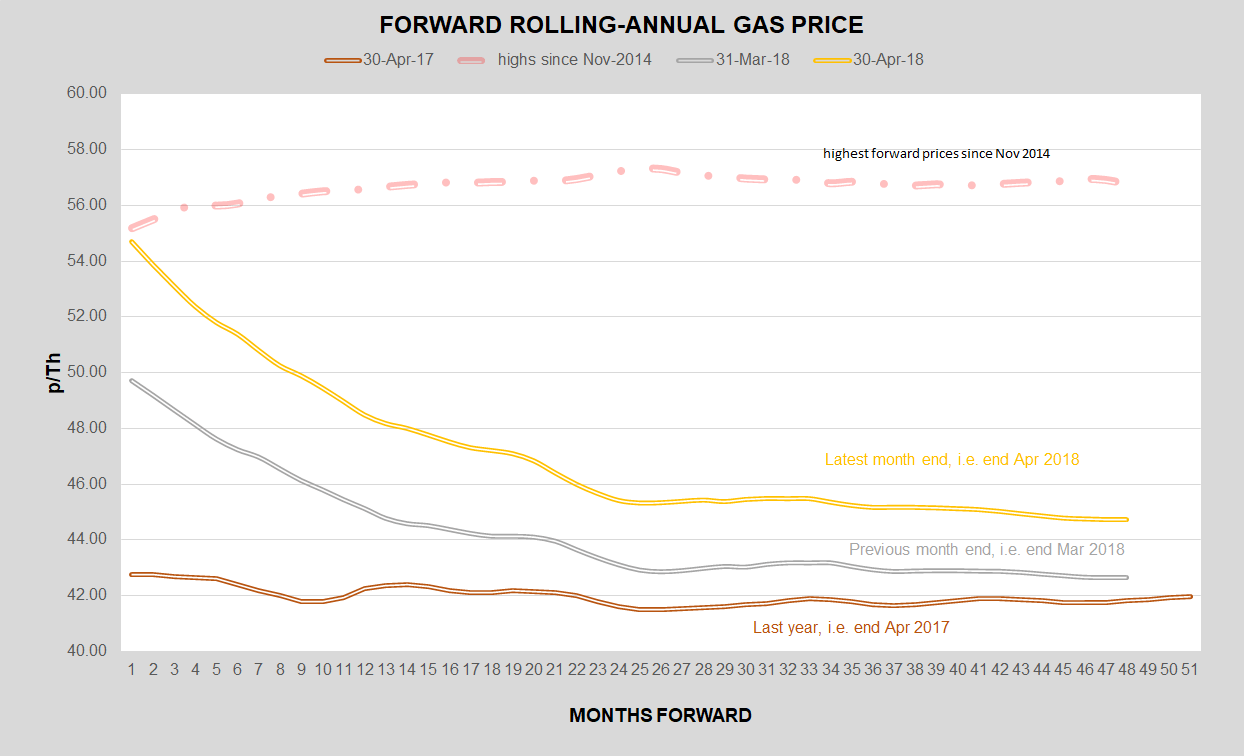 The increase in backwardation for rolling annual gas prices together with the increase in prices, both consistent from a structural perspective, did reflect the strong market influences and strong buying demand, albeit during the very warm spell there was a short respite from the bullish sentiment. Annual gas prices reached levels not seen since November 2014, though with strong backwardation forward prices look relatively good value, perhaps indicating these forward prices really need to rise before we see a reversal in sentiment.

Recent price moves have seen increases at rates (~10%/month) not seen for many years and have taken many market participants by surprise. Some of this can be attributed to the late winter, some to the continuation of outages at a number of Norwegian gas facilities, some to the pent-up demand that was waiting for Spring (expecting much anticipated lower prices) and some to higher oil prices, driven as much as anything else by political tensions in Syria and renewed tension between US and Iran.

Much like gas, UK power prices moved higher and backwardation in the forward curve for rolling annual prices increased again. As well as generally following the gas market drivers, power prices also reacted to the uncertainty in availability of renewable generation; as a consequence, some forward prices touched levels not seen for over 5 years, although longer dated forward prices remained at lower levels.

Poor temperature and weather forecasts for early May also buoyed prices at a time when demand is often on the downturn. Coal and oil price upward movements also support power, as well as weakening GB£ rates versus € and US$.

Brent prices increased again to mid $70s $/bbl, levels not seen since November 2014; much of this driven by increased political tensions and some reasonably supportive inventory statistics.

Geopolitical events kept prices elevated during April and could continue to do so in May, but supply/demand balances suggest a possible downward correction in 2H18. Nevertheless, over the near term, analysts suggest prices will continue to be supported by a perfect storm of stagnant supply, geopolitical risk, and the harsh and late winter in much of the northern hemisphere. Furthermore, If OPEC does not begin to compensate by using its own relief valve of higher output, it may find the market shifts structurally before it has time to react.

NB: Movements in oils prices have tended to impact forward gas prices as longer-term supply contracts include an oil related price formula, though this tendency is actually on the decline.

As a default it might also be prudent to cover at least 2-3months in advance together with longer dated requirements – it now looks like we may have to wait a while longer before contango returns.