While UK energy prices appeared jumpy and volatile throughout April 2017, in reality the price range was relatively small, limited to a few percentage points either way, with annual prices ending down roughly 1-2% on the month. Crude oil prices were slightly more volatile but with the same end result, despite increasing rhetoric between USA and N. Korea. Fundamentally, the main news impacting the UK energy market was confirmation that the long-term gas storage facility, Rough, cannot safely re-commence injection operations in the 2017/18 Storage Year; although this did have some small structural impact to the market overall price movements were relatively mundane. The other main news of note, was the announcement by the UK Prime Minister, Theresa May, of a ‘snap’ general Election in June, which did support the sterling exchange rates so there were small gains against both the US$ and the €. Altogether the result was to slightly increase the backwardation in the forward curve for rolling annual prices, despite the small drop in overall price levels – i.e. consistent with a fundamentally tighter market due to Rough but lower prices resulting from the lower oil and stronger sterling. 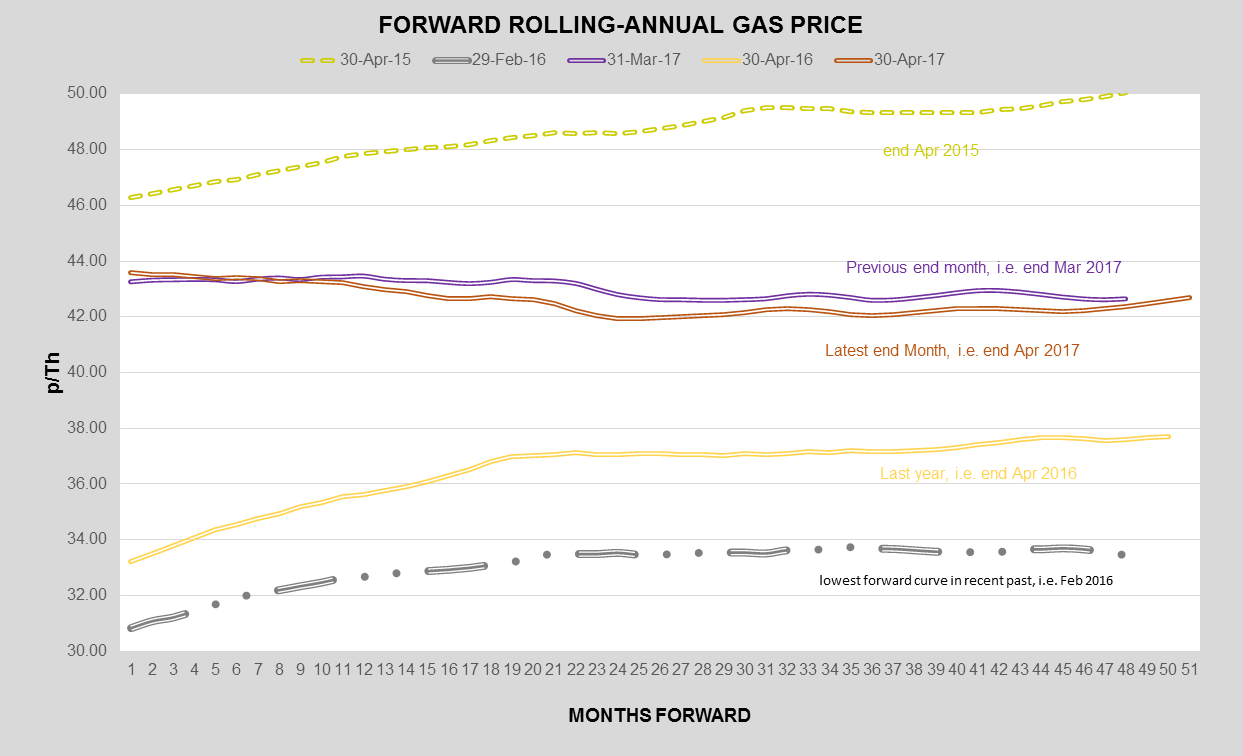 The slight increase in backwardation for rolling annual gas prices and slight drop in prices, while inconsistent from a structural perspective, did reflect the offsetting market influences. The restrictions in injection to the Rough gas storage facility until the 2018/19 storage year is likely to depress this summer’s market while supporting winter 2017 prices. It is also likely to add a risk premium for the following years until Centrica eventually enables full operation.

In this month’s chart, as usual the move from last month and last year is shown, however, for reference, the curve from end February 2016 is also included as this represents the lowest curve seen in the gas market for many years – anybody lucky enough to fix their prices in February 2016 will be very happy; this level, which established the likely limit to how low prices could move, will continue to be monitored going forward. The curve from two years ago is also presented, showing how the market has moved over the last two years.

Movements in UK power prices generally followed the gas market; despite the slight drop in prices the power market is still structurally strong, showing clear backwardation in the rolling annual forward curve. As for gas, the low forward curve (for power that was in March 2016) is shown as a reference and guide.

Brent prices dropped slightly over the month as speculation grows with respect to OPEC’s current production cap agreement and whether it will be extended, and how.  Many analysts were quite bullish about 2Q17 prices, and for 2018, though some are now reducing expectations. Much of the analysis is based on US inventory levels though it has recently been recognised that the ‘strong’ inventory data has been partially due to higher than usual oil-product exports from US – whether this is sustainable is open to question and relies somewhat on increasing demand from Europe and China, both of which could be debatable. Logistic constraints affecting Australian coal exports might well be providing some respite.

Over the coming months, political influences, whether that be the various European elections or tensions caused by the likes of N. Korea, will continue to provide some volatility to price. Fundamentally, short term (Summer17) pressures may well help prices down for UK energy. However, structurally the markets still imply higher prices over the medium term and continue to suggest dips should be used as an opportunity to partially cover longer term needs.

Thereafter, the LNG supply/demand balance may well hold the key to whether the gas market returns to contango, and an associated weakness in sentiment, or maintains the general trend of the last year.