Whereas throughout April 2016 the oil market continued the steady price rises we have seen over recent months, driven as much by technical factors and rumour than any change in oil fundamentals, the UK energy markets stayed steady for most of the month ahead of a very sharp rise during the latter part of the month. The UK gas and power markets took their cue from the return of unseasonably cold weather fuelled with the sentiment flowing from the oil market – UK prices spiked up about 15% and then dropped 5%, settling at month end about 10% up on the starting price.

Despite these sudden change in prices, the structure of the forward curves for annual prices remained similar to last month for gas, reflecting the good supply position, and for power the forward curve even reduced its backwardation slightly.

With power generally following gas at this time, changes in the forward curve structure for gas are more likely to provide the signals to market direction and as oil moves in to the usually higher demand summer driving season, differences to expected US stock and demand levels can vary significantly, adding market uncertainty. 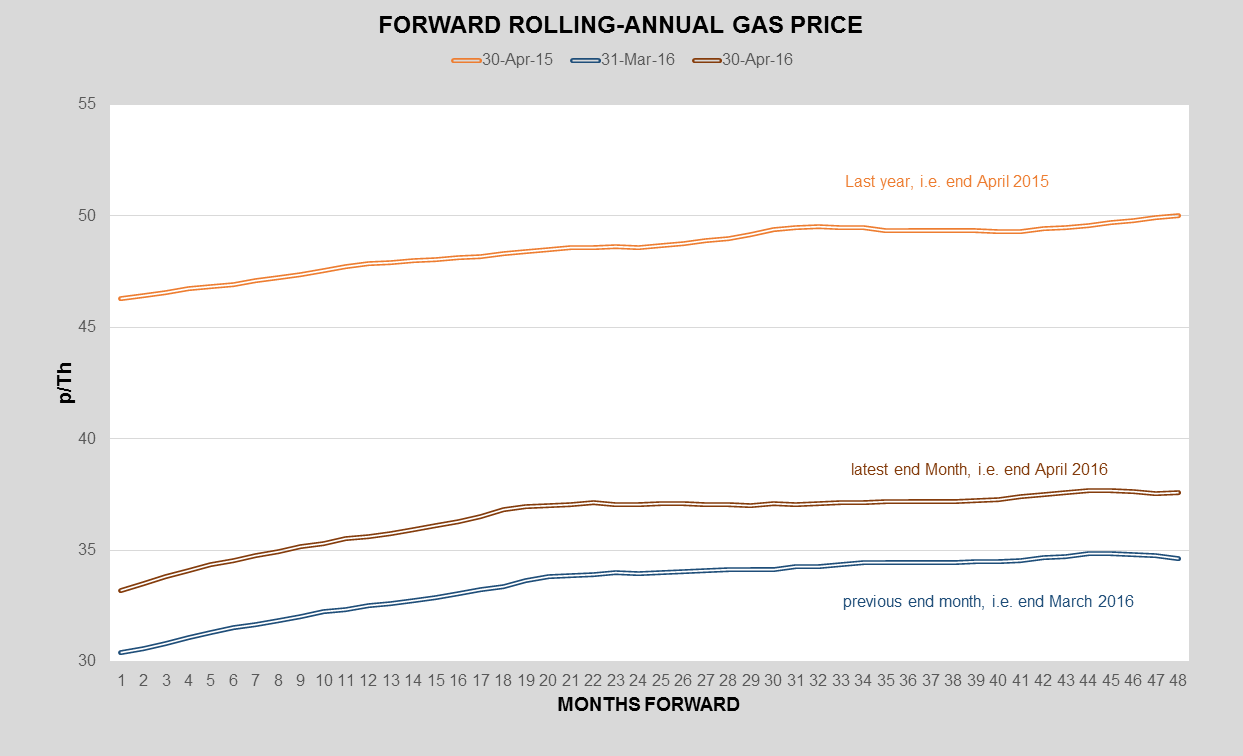 All gas prices, whether for prompt or forward delivery, leaped up at the end of the month on the back of seasonally cold weather and continued upward momentum for oil. Nevertheless, fundamentally gas still appears to remain well supplied, which is why we saw some drop as May began and the weather turned warmer again. It is worth noting that even after the recent hike, prices available at the end of April 2016 are about the same level as December 2015 and are still well below the price levels this time last year – anybody who held a delayed buying strategy over that period are likely to have still achieved better levels compared to their competitors who purchased fixed priced year-ahead contracts at that time.

So, as long as the oil and gas markets remain in contango, it is reasonable to consider that forward gas prices will eventually reduce, reflecting the fundamentals and forward market structure. However, we do expect some oil led increase in volatility over the coming weeks until the market settles down again though should the oil or gas market show signs of flipping to backwardation, then strategies should be revised to increase forward buying.

Power:
UK power prices generally followed the weather-driven gas market up, though interestingly the slight backwardation in the forward curve for rolling annual prices reduced, which is somewhat surprising if expectations are for continued market strength – such a change to the forward market implies less conviction. On the other hand, looking at the power market forward curve structure in isolation, using contract flexibility to buy some forward cover when the market dips may still be the most appropriate strategy, rather than either fixing all volumes forward now or relying on a purely delayed buying strategy.

As the weather improves again and renewable generation becomes more important in the generation mix, we will continue to see the potential for enhanced volatility of spot prices. As for gas, currently available power prices are still relatively low in relation to the past, which may well influence buying strategies, though it may be worth considering that last summer the same was said by many intermediaries (TPIs), encouraging clients to buy at levels that appeared cheap at the time though are now well above today’s levels.

Oil:
Brent prices have continued their upward move during April. Initially the sentiment was driven by expectations of an OPEC agreement, with Russia, to cap production. However, such agreement failed to materialize, primarily because Iran had no intention to limit their ability to increase production following the easing of certain sanctions. Furthermore, most market analysts were reporting that a cap may not be sufficient to impact the supply imbalance. Nevertheless, whereas prices did drop for a while at the time of the oil producers meeting, the market picked-up again afterwards in response to a Kuwaiti oil workers’ strike, delays to oil shipments from Libya and concerns of heightened disruption risk in Iraq and Venezuela, all lowering the spare capacity. Accordingly, there have been some revisions to oil market forecasts going forward that have helped buoy the markets with expectations for Brent in the $40-$50/bbl range for this year – analyst opinions caught between a bearish narrative of prompt global oversupply and a bullish narrative of market balancing as soon as late 2016. Meanwhile, even with these slightly higher oil price forecasts there continues to be plenty of hurdles for the market to overcome and so most analysts still expect a period of volatility and lower prices before long.

What’s the Outlook?
With oil currently a strong focus for UK energy traders at the moment, the things to watch for are strong growth in gasoline demand in the US, any better economic data out of China and India and a weaker US dollar.

For the UK power market, one complicating factor is that the ever increasing dependence on subsidy being required to support generation (whether it be for renewables, nuclear or even via the Capacity Mechanism to ensure sufficient thermal generation to manage demand swings) has the potential to make the power market decreasingly relevant in comparison to non-energy cost growth, which could become the primary driver to purchasing strategies.